Blood and Plunder - Sea Battle with Frigate and Bark

This afternoon (and evening) saw us play a fairly epic battle with my new Frigate, manned by English Buccaneers and commanded by Brendan, against my Brigantine and Bark manned by French Buccaneers. It would be the first battle for both the Bark and Frigate.

The scenario rolled was "Rescue" and Brendan was the defender holding my merchant hostage. I had to get him back!

So with that in mind I went straight at them... Trying to get hits on the Frigate's rigging in the first turn and missing completely! 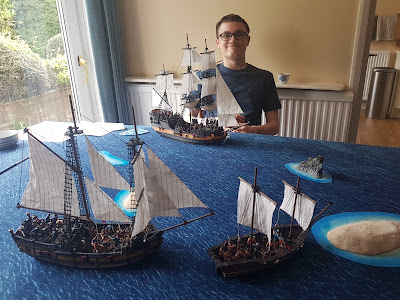 The wind immediately became stronger and though my Brigantine could handle it, the Bark's rigging soon snapped and its crews became unable to change its sail setting. This I didn't worry about overly, accepting the minor damage and concentrating on trading broadsides and musket fire with the Frigate. 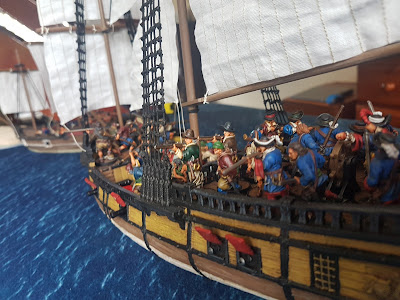 Eventually I decided that the only way I was going to win this was to cross the T of the frigate. The Bark went across its bows and the Brigantine across the stern. 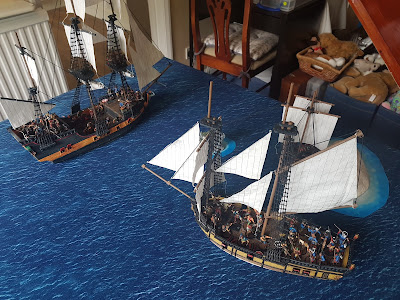 Brendan tried to manoeuvre out of the trap, but I had the weather gauge. 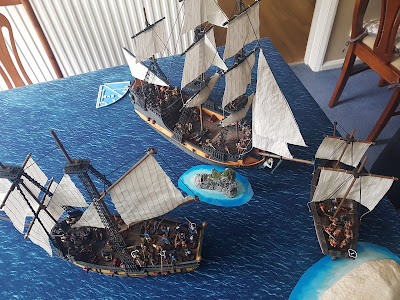 Pretty soon I had a devastating raking shot at very close range. These are particularly nasty as hits are doubled. The frigate survived. 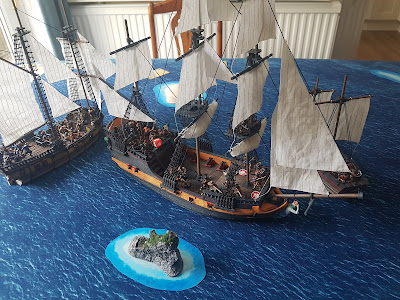 I managed to get another really close-range shot with the Bark, again doing plenty of damage but at massive cost. All the crew on the little ship were killed in a devastating broadside from the Frigate and it drifted and started to sink. 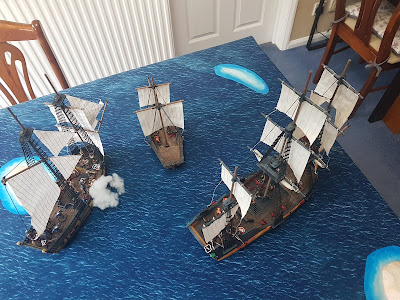 This left us with two fairly damaged ships, though I had a few more crewmen active. Our speeds were matched and it looked like Brendan could get away with it. 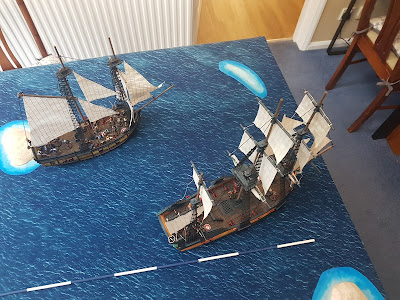 So something drastic was needed. Then then wind suddenly changed in my favour and allowed me to cross his T again. The larboard cannons were fully loaded and Brendan did not expect this at all. He thought I was going to board. 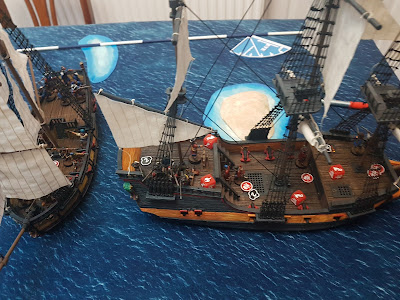 The raking shot hit home with devastating effect. I was hitting at point blank range and with his ship massively damaged I needed 1+ to hit. 8 hits went home, doubling to 16 for the raking shot. He lost crew all down the ship and the 8 criticals resulted in fires, leaks and a catastrophic damage critical. The ship would sink at the end of the turn. 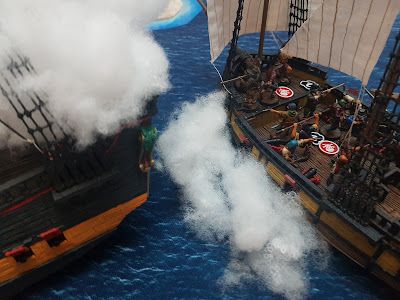 And then Brendan reminded me.... If the merchant died then we would both lose! I needed to capture him, not sink the ship. I never expected to sink anything and in the excitement I'd forgotten completely!
However being a good sport and to make the story so much more interesting Brendan abandoned the ship and waded to the nearby sandy island. I agreed that if they threw their weapons in the sea I'd carry them to safety, along with my prize, the rescued merchant! 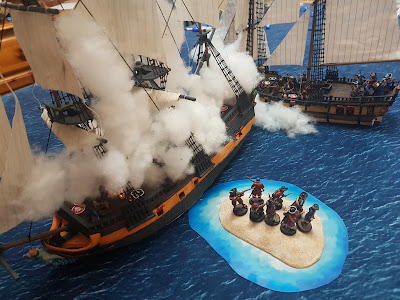 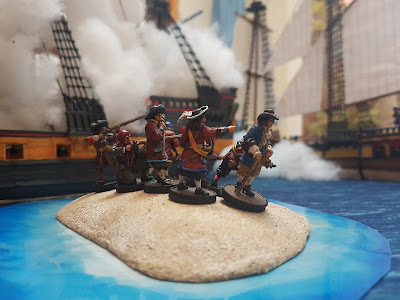 What a great game... It took all afternoon and most of the evening but it was well worth it and we both were really glad we played through to the end.
Posted by Richard Heath at 21:36