There's no stopping me! More Dungeon...

Well, actually there is some stopping me, or at least slowing me down.

With the creation of a few more dungeon bits I've just run out of basic fieldstone blocks. (Well I have 3 left actually).

Not to worry though, there's more being cast up and dried right now!

The bit in the middle will be filled with water. 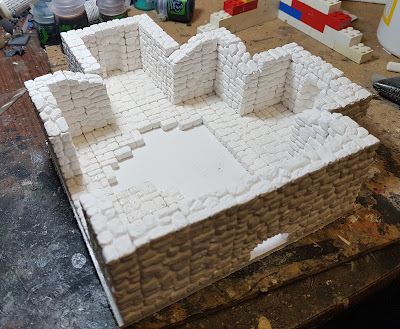 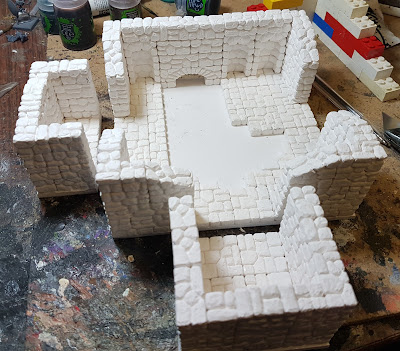 Posted by Richard Heath at 21:21 No comments:

Like many I've been a massive fan of Monty Python and the Holy Grail since I first saw it back in 1990. So when I saw the Medieval Mayhem range from Studio Miniatures I had to have a few.

Having been caught out by scale creep issues previously from various manufacturers I wasn't about to plump for much from them, so instead I thought I'd just get the one miniature to test the scale. I decided to go for their "The Sorcerer" miniature, which has slightly more than a passing resemblance to Tim the Enchanter, one of my favourite characters from the film.

Well I've just finished him and I'm very happy indeed. The detail is crisp and the sculpting excellent and in proportion. 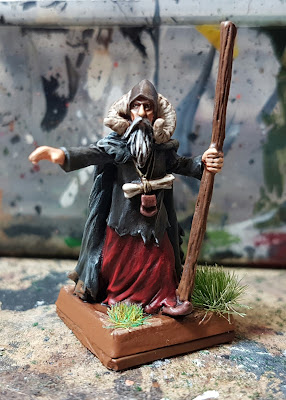 He'll fit in fine next to my Perry War of the Roses or my dark ages miniatures, Crusader Norman as an example. Both pictured below. 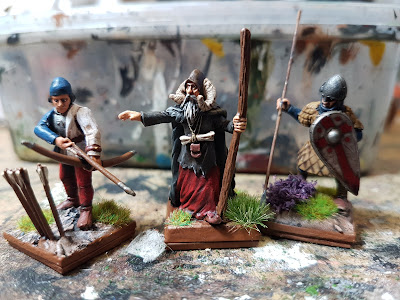 And with an old Citadel Brettonian crossbowman. 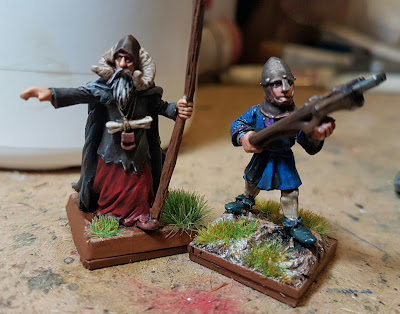 Posted by Richard Heath at 12:45 No comments:

Email ThisBlogThis!Share to TwitterShare to FacebookShare to Pinterest
Labels: Frostgrave, Kings of War

It was odd going back to painting a few miniatures after working on all those Hirst Arts buildings.

Next up I have to start work on the base boards for the Frostgrave games we'll be running at the Derby World Champs in October. 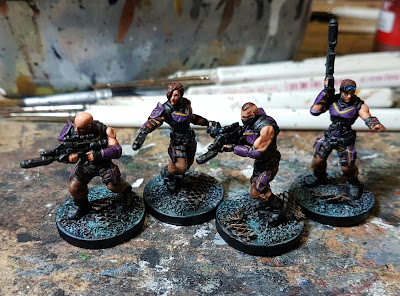 Email ThisBlogThis!Share to TwitterShare to FacebookShare to Pinterest
Labels: Deadzone

It's finished and I'm really happy about how it's come out.

It's ready for the next Frostgrave game on Monday.

Here you can see the building with the two towers and in various combinations with some of the walkways I've built, 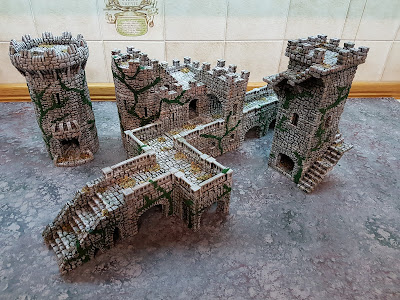 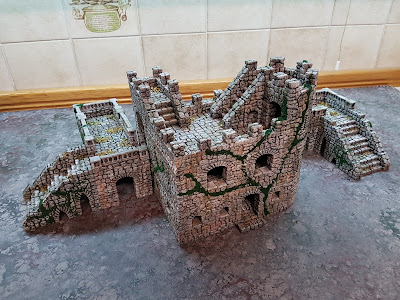 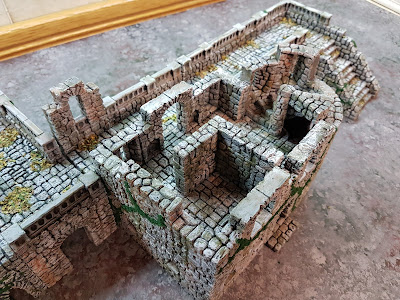 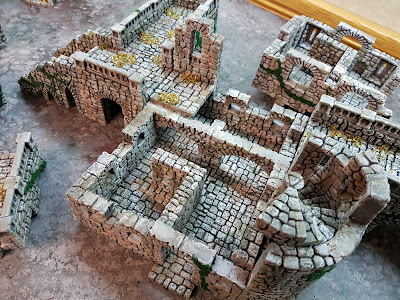 The actual build is complete, on to the undercoat tomorrow night when everything is completely dry.

I had to fill in some large gaps that appeared during the build with all-purpose filler. I also decided to add some internal walls and sanded some pieces to make window sills. 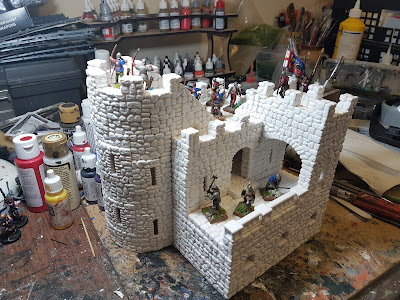 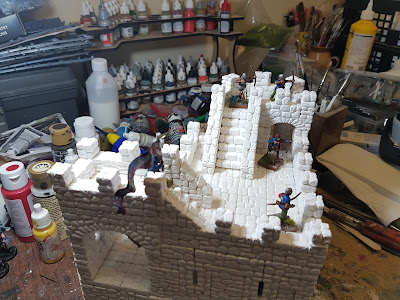 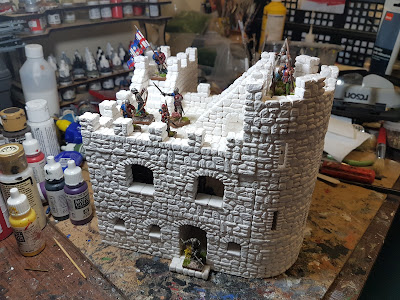 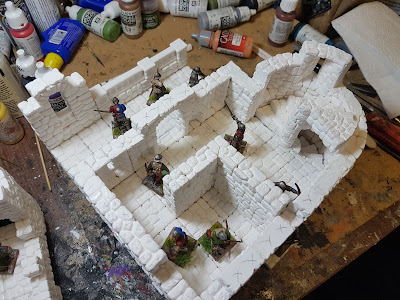 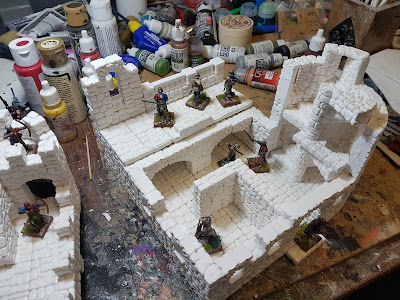 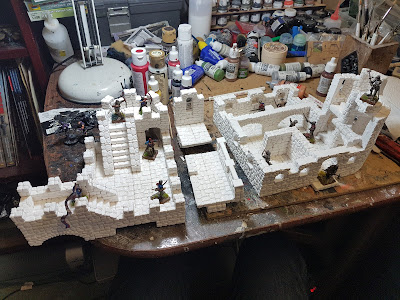 Posted by Richard Heath at 18:19 No comments:

I've been working on the building I designed in sketchup for quite a few nights now. It's all starting to come together rather well so I thought I'd share a few in-progress photos.

There's one more floor to make and the raised areas above. It's been quite difficult to ensure that it all comes apart as planned.

Luckily it fits in quite well with the existing walkways. Though I have a fair number of gaps to fill in the stonework. 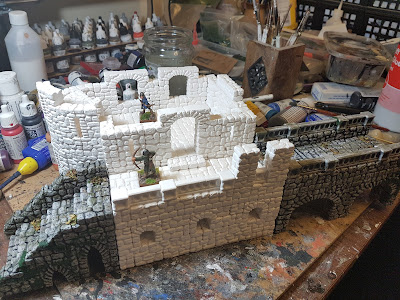 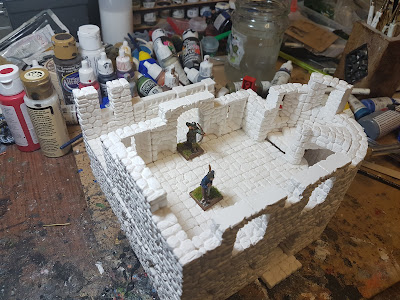 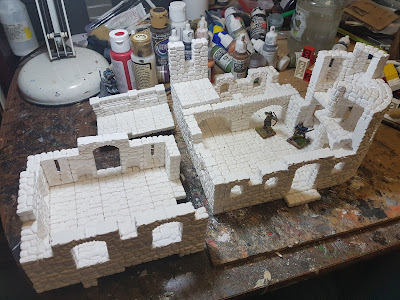 And so my Hirst Arts projects continue...

I've just finished a 4" round tower. For this one I wimped out and followed the standard Hirst Arts guide almost exactly. I just went for one of the alternate arrangements of the arrow slits.

Now I've done this one I think I understand the round tower mould enough to be successful in making the building I designed in my previous post. 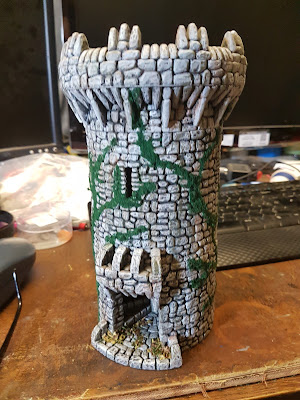 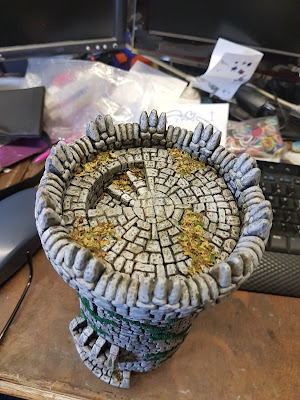 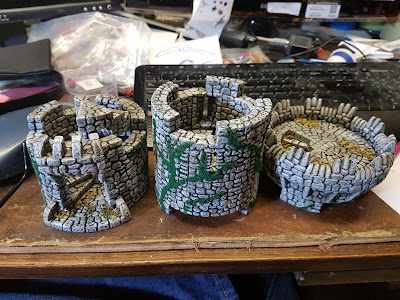