Well it's a fairly old game, but one I've only ever heard good things about. Plus I've had the actual rulebook for sometime now. I think I picked it up on a bring and buy for a couple of quid.

So I agreed. He lent me his rulebook, and I realised I didn't have everything I needed. So I obtained the "Sourcebook" as well for a reasonable price off ebay.

Then I looked around at models. There's plenty of Necromunda gangs on ebay, but I decided to also look at alternative models. I considered using my Deadzone models and my old 40K Imperial Guard, but wasn't entirely convinced. Which is when I found this page.

This then lead me to Heresy Miniatures and their Sci-Fi Gangers. Despite not saying a word about Necromunda on their page, I could see these were an almost perfect match for the Necromunda Delaque gang. They even had "Juves", although they called them "Noobs". The price for a while put me off, but the quality and dynamism of the sculpts eventually drew me in. (Plus the realisation that compared with the going rate for old GW gangs they weren't far off.)

Anyway with the first game about 8 days away now I finally got them finished off. These are just the models for the starting gang. I have about the same number again to build and paint as the campaign progresses. 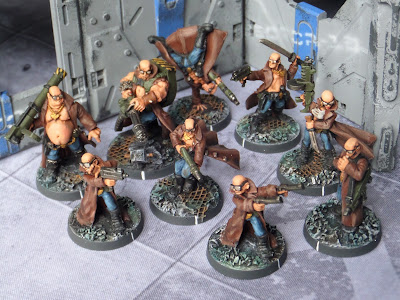 Wars of the Roses close-ups.

I've been asked for close ups of the Wars of the Roses miniatures I just posted. Who am I to deny that wish? 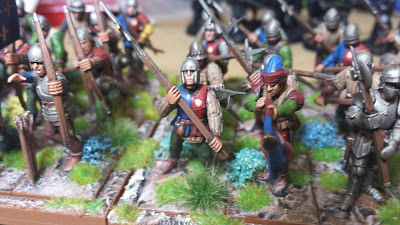 Wars of the Roses progress

With another troop of men at arms, the cannon and the army standard bearer complete my Yorkist force is starting to come together. 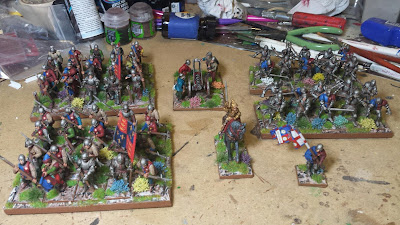 In Kings of War terms I have:
A total of 595 pts. So quite a way off the 2500pts for a tournament army! But then I do have plenty of allies I could use.

In Lion Rampant terms I have:
A total of 30 points, plenty for a Lion Rampant game. I'd probably drop one of the Foot Men at Arms units for a total of 24 points. I really need a general on foot. There's one from the Perry's plastics Men at Arms I can use.

Read more »
Posted by Richard Heath at 21:35 No comments:

Today we had our first game of Fighting Sail. The Napoleonic Naval rules by Osprey.. 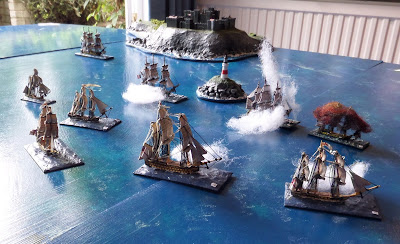 There were three of us playing and with the mix of ships we had available I came up with a scenario where there were 4 British ships pursuing 4 French ships. The British had to capture or destroy one of the French ships before it escaped off the other end of the table.

The third player was a pirate with a couple of Frigates and a Brig. We were not allowed to shoot at him until he attacked us, showing his true colours. His objective was to capture one of the French or British ships.

So a few days since my last post. Time for an update.

In that time I've completed this 1/1200 lighthouse. I was planning on completing it for Sunday, but with a short-notice Man O'War game booked for tomorrow night I thought I'd get it finished early. 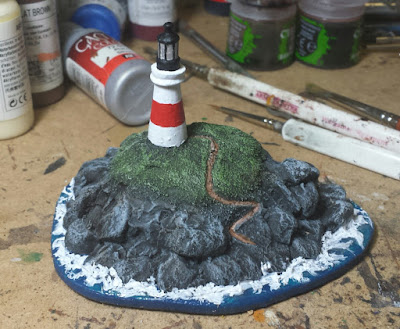 Before the lighthouse my War of the Roses project continued. This time with this lovely Perry cannon. 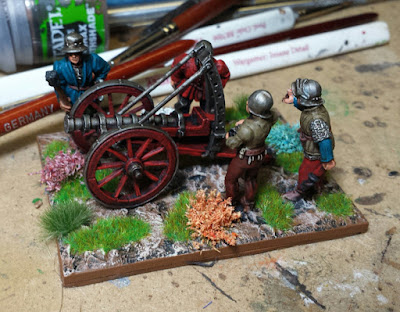 Posted by Richard Heath at 22:52 No comments:

So tonight I was supposed to be painting this Wars of the Roses canon. Well I did as you can see... 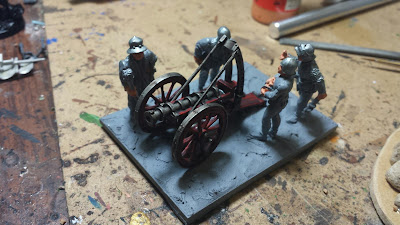 But then I was drawn back to Napoleonic naval and I started work on this Langton's lighthouse. 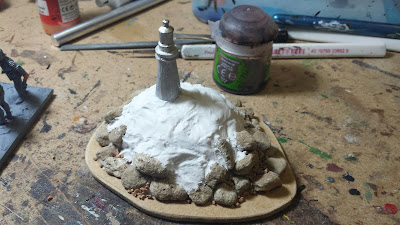 Then glancing up at the shelf I spotted something in a box... Was that another Langton's ship unfinished from 20 years ago? Yes!

The writing on the bottom says "80 gun" and I assume it's a French ship as I didn't build anything else 20 years ago. It is a three decker and the main mast is oddly significantly closer to the mizzen than the foremast.

I guess I'll have to add that to the queue then! 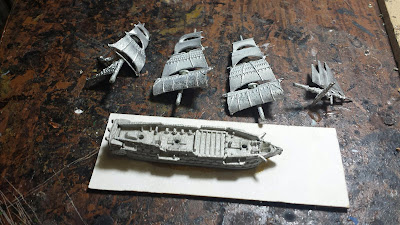 Posted by Richard Heath at 00:30 No comments:

Tonight I finished rigging the brig for my French fleet. 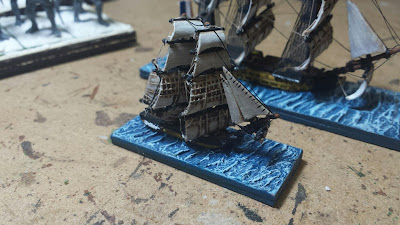 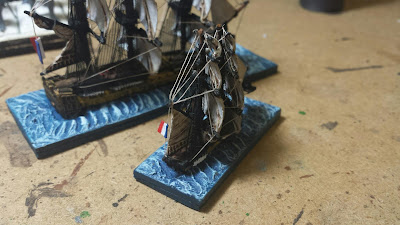 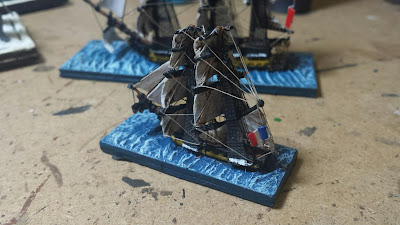 Here is the entire fleet. 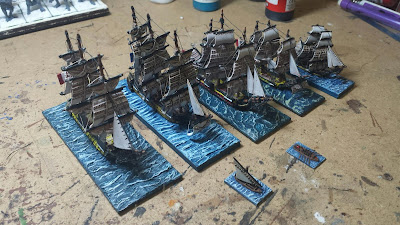 I think the next ships I do will have to be British so that the French have someone to fight in battles at home. That will have to wait though as I have other projects now!
Posted by Richard Heath at 00:17 No comments: