Today saw the first game at a wargames club we've had for ages. The club was Dales Wargames in Darley Dale and myself and Brendan put on a large sea battle for members just starting off with Blood and Plunder.

I controlled the English side with Colin and we had a light frigate and a bark. The opposition were French, as usual, controlled by my son, Brendan and Pete with a brigantine and sloop. The scenario was Plunder. I just finished painting up my Printable Scenery shipwreck yesterday and it would be its first time out.

We started off in the two corners opposite the shipwreck which had two chests of treasure on it. Both sides used their larger ships to mask the smaller ones in the initial stages of the battle. The wind for the moment was pushing us both quickly towards the objectives without either side having an advantage. How I wish that had stayed the case. 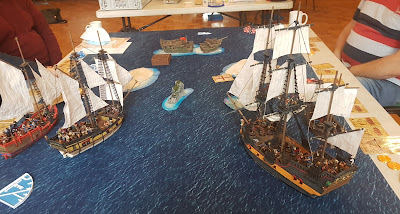 I had a plan. I would let the bark rush towards the objective whilst I would turn the frigate behind the French ships raking their sterns. This was scuppered almost immediately when the wind changed to point towards our side of the table. We'd have to sail to windward for most of the battle and would be unable to turn far enough to obtain the rakes I was hoping for. 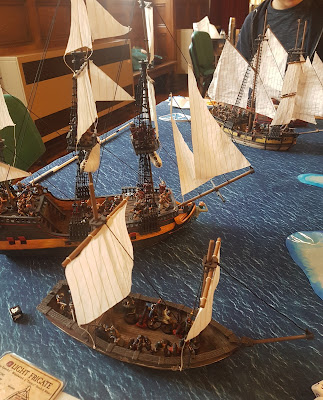 Anyway, we continued to trade broadsides. Mostly between brigantine and frigate, with occasional shots from the sloop and and bark. I turned the frigate to get closer to the enemy, but in the process the frigate lost its arc of fire on them. I had to turn back and that meant that a shoal was right in my path. 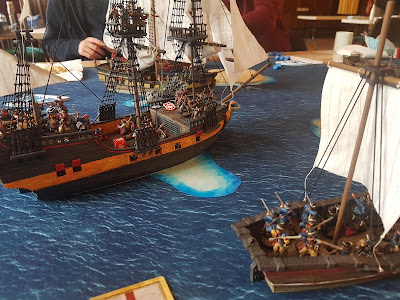 It was going to take a few turns to get over this and each time there was a good chance I was going to run aground. It was inevitable and pretty soon my frigate was stuck. I would have to reduce sail and push off. The other ships continued on and the French started to target the bark more and more. 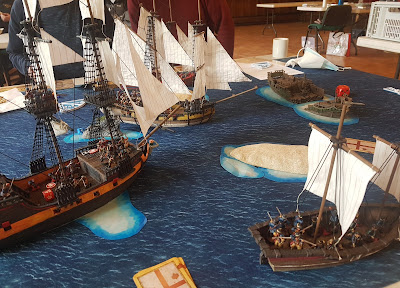 Pete's sloop was the first to grapple onto the shipwreck and his native musketeers jumped over to retrieve the prize. 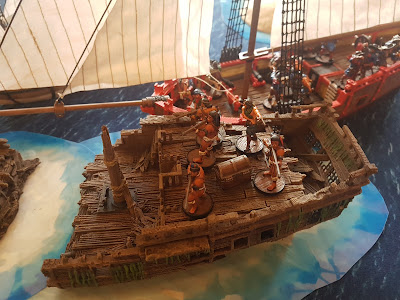 Brendan's brigantine was pretty close as well, but he saw the chance to ram Colin's bark. This he did, though damage was minimal, so he grappled onto the wreck and sent some Marins over for the treasure. 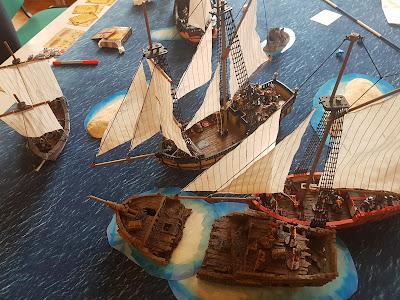 But the ram gave us an idea. The brigantine was the French flagship and as such was an objective. The bark was far less important. Colin decided to grapple the brigantine and board with his Dutch Kapers. 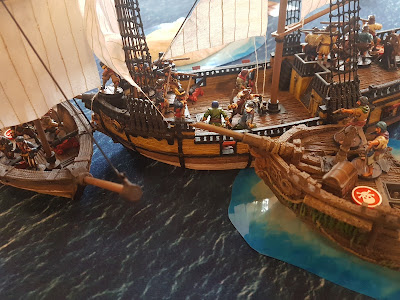 They destroyed the defending Veteran Freebooters and Marins fairly easily and it looked like the English had the upper hand for a moment as I had also managed to get the frigate sailing again.
But our hopes were dashed as Pete grappled the sloop onto the stern of the brigantine and was able to send reinforcements over to the threatened French flagship. These reinforcements made quick work of killing the remaining Dutch troops and the French captured the bark!
In the end the French won decisively with both prizes and the bark added to their fleet. Though they had taken heavy casualties, the English had faired a lot worse.
That was a great game and a tense finish.
We're looking forward to far more games of Blood and Plunder at Dales in the coming months especially when Pete, Colin and others have their forces ready to play! Maybe we'll even be able to start a campaign?
Posted by Richard Heath at 17:46