Continuing with the Abyssal army, next up is two troops of Gargoyles.

These models from Mantic are normally balanced precariously on little pillars, which looks okay, if a little silly. I wanted to see what I could do to improve that.

Since I have been semi-embracing multi-basing with this army I thought since Gargoyles are a Gothic architecture thing perhaps I should have them flying over a Gothic ruin built from blocks from my Gothic Hirst Arts moulds.

I painted them on their little pillars in the same basic scheme used on all my above-ground Hirst Arts terrain and then cut them off the pillars before gluing them in place flying over the ruins of a church wall.

Although I normally dislike buildings and other large structures on movement trays, I think this works rather well. 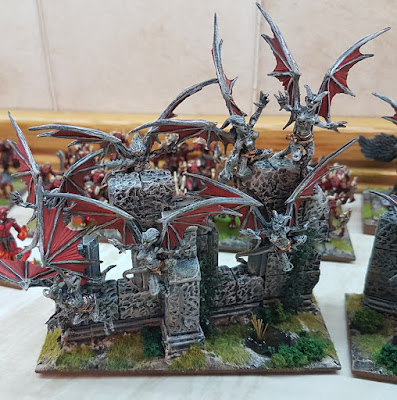 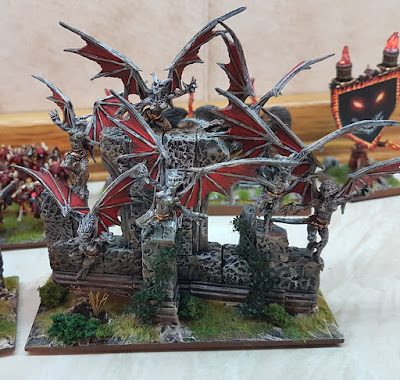 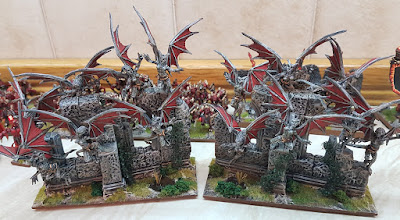 Email ThisBlogThis!Share to TwitterShare to FacebookShare to Pinterest
Labels: Forces of the Abyss, Hirst Arts, Kings of War

I've just completed the Abyssal Champion from Dungeon Saga and the metal Efreet from the Kings of War Abyssal Army. 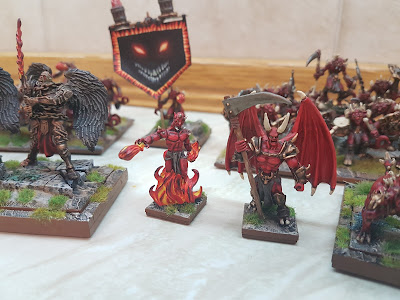 The Tortured Souls that Mantic produce don't to me match the description in the rulebook. For some reason they are only the same height of a man and are throwing firebolts. In the rules they are large infantry with fly and can't do any ranged attacks.

I came up with an alternative solution. I had a pack of three Basilean Elohi which I bought some time ago. They're large infantry with wings and I think with the mods I've done fit the fluff quite well. With the addition of some chains, a head swap with some zombies and some damage to their armour I think they work quite well as fallen heroes or fallen angels. 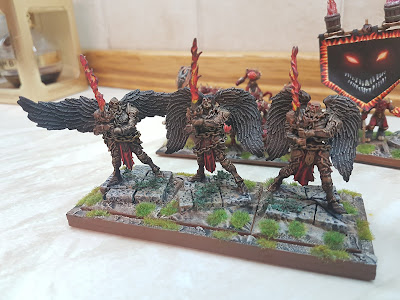 The Forces of the Abyss grow

A few weeks ago I posted photos of the first unit of my Forces of the Abyss army for Kings of War.

Over Christmas and the new year I've been busy mostly working on items for my re-enacting hobby, a Boer War uniform and restoring a vintage bicycle. However I have found a bit of time inbetween all that to paint up 3 more units for the Abyssals.

The first unit was a regiment of Flame Bearers. These are based off the same sprue that the Lower Abyssals I painted last time and I've again put them on a base lit with flickering LEDs, see the video at the end of the post. 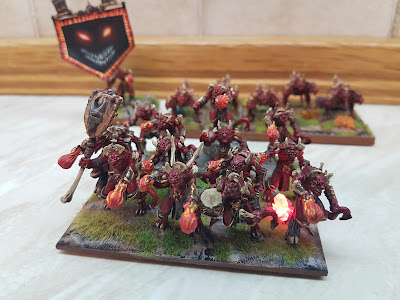 The second, which I actually painted at the same time is a Harbinger of the Abyss. I saw these as being the Abyssal army's equivalent to an Army Standard Bearer so I have built it up just as that. I decided to use some more flickering LEDs to make some rather precariously balanced fires at the top of the standard. I initially used conductive paint to get the electricity up the banner pole, but this proved to be very troublesome and in the end I used normal wire wound up around the pole. The pole itself being the return path. 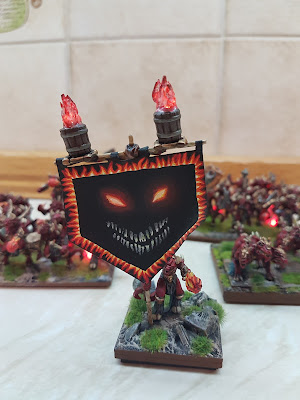 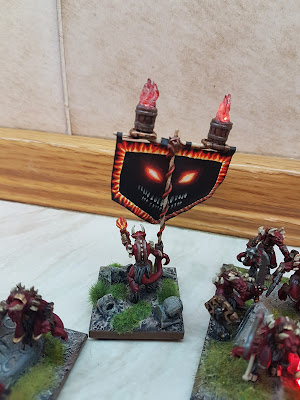 Finally I just completed a troop of Hellhounds. I had three of these from the Dungeon Saga kickstarter and managed to obtain 2 more from elsewhere. I decided not to multibase these as I may need them for Dungeon Saga in the future however Dungeon Saga has a smaller base size from Kings of War for these models and so I based them up for Dungeon Saga and put some fillers in.

They're all the same model, but being relatively randomly placed I don't think that's a problem. If I ever get some of the Kings of War metal versions to supplement these I will be able to mix them together, 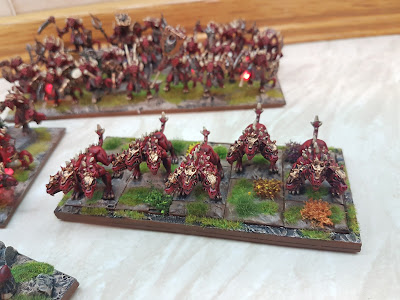