Sorry I've not been posting recently! We had a holiday and then with Covid restrictions being relaxed I've been seeing my family and going in re-enactment events. But finally we got a Sunday afternoon free to get a game of Blood and Plunder in.

The scenario chosen was Escort with the defender looking after a dignitary, whilst the attacker tried to kill her. Both sides had ships in our version of the scenario and played to 230 points.

We both looked beyond our usual selection of forces for this one. Brendan chose to take Pirates with a mix of elite English and French troops lead by a French commander in a Sloop. I chose an English Pirate Hunters force with a few Dutch units and several small Sea Dog units but with the hugely expensive, but well worth it, Henry Morgan in command. My ship being a Bark.

My Pirate Hunters were the defenders with them escorting a beautiful lady to safety either across the water or to the other side of the last. The Pirates came under false colours and I was unable to shoot at them for the first few turns of the game. 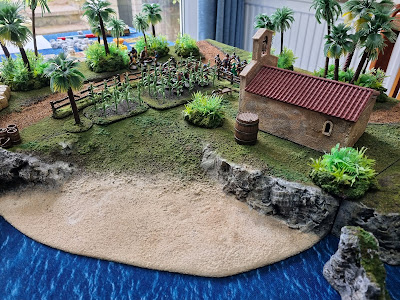 The first few turns had my forces moving forward under cover, the bark unable to open fire on the pirate sloop as it flew English colours. Brendan's land forces sneaked around the back of the tavern. 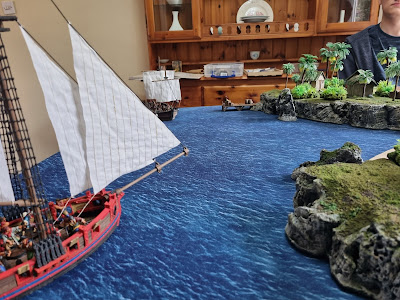 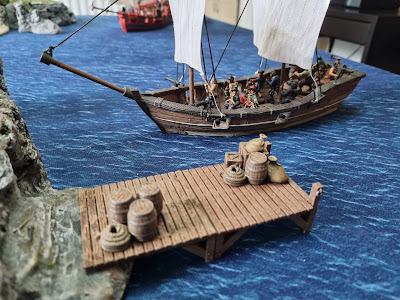 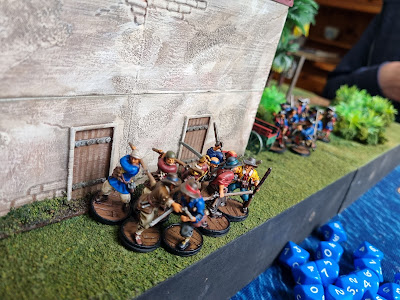 Eventually the sloop replaced its flag with the black pirate flag and opened fire on my Kapers on land. The Bark seeing this immediately returned fire and caused more damage than the sloop did. 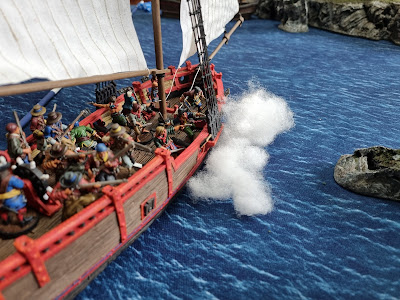 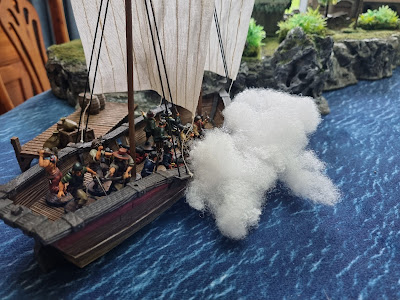 I had taken both Light Cannons and Swivel Guns on the main gun-deck of the Bark and this meant that the Kapers were able to shoot and reload both for extra firepower.
I grappled the Bark onto the pier and tied it up. Their sailing done, the Sea Dogs ran onto land to help out as best they could. 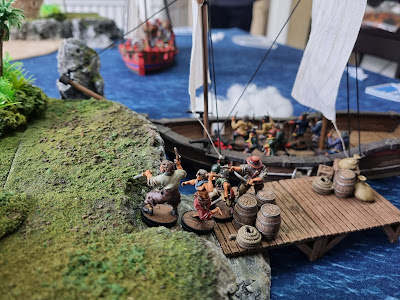 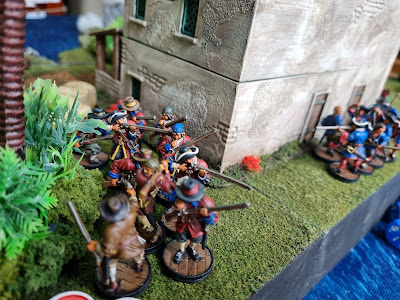 Meanwhile the Kapers sneaked through the corn fields. They were unsure about the open ground in front of the tavern that was under the eyes of the gunners on the sloop. They needed a diversion! 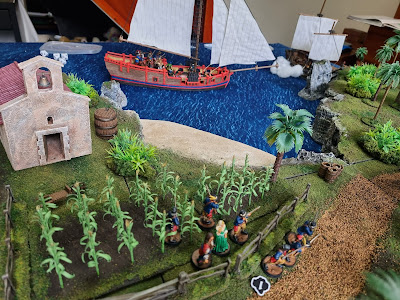 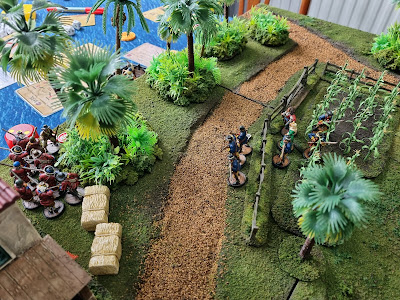 The diversion came in the form of the free Long Boat that the scenario allowed to appear from hiding near the centre of the table. This I had loaded with a small Sea Dog unit. I'm pretty sure they're supposed to be there to carry the dignitary to safety, but for my purposes they appeared right next to the Sloop and boarded it! 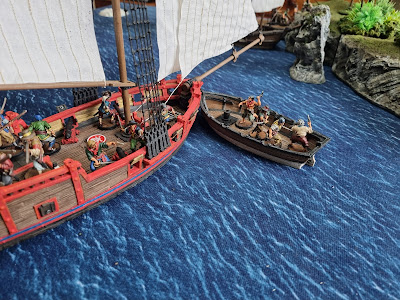 After a couple of fight actions I had cleared the gun decks, but then the Freebooters opened fire and the Sloop was back in the hands the pirates once more. 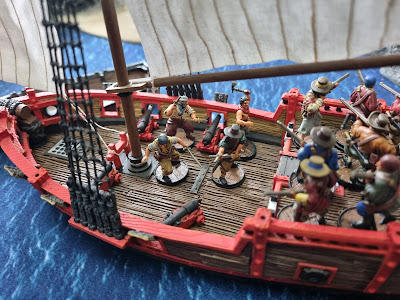 However this was just enough time for the Kapers, Henry Morgan and Elanor to dash past the tavern at high speed.
By this time the only land unit left to the Pirates was the Flibustiers and they dashed after their quarry, shooting their muskets in a devastating attack, that put 4 fatigue on the Kapers. However Henry Morgan is a very strong character and he managed to remove all of that and still limp to safety ordering the Sea Dogs from the Bark to get between him and the Flibustiers. 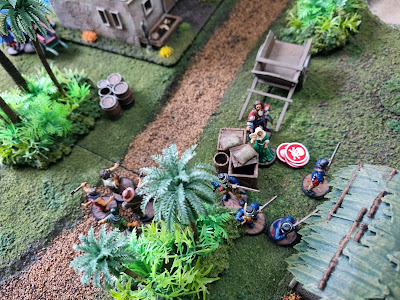 This did not deter the Flibustiers though and they dashed forward again. Shooting 3 of the Kapers in the lead. 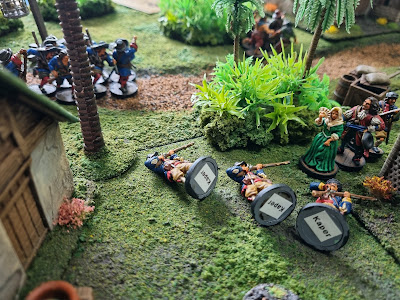 Things were looking bad for Henry, but his will was too strong and he continued to move towards the table edge with the dignitary. The Sea Dogs charged the now worn out Flibustiers in the last moments of the battle, but did not rout them. 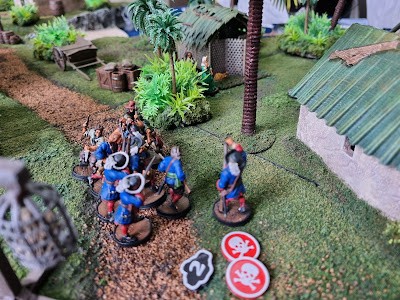 However this was the end of turn 6. The end of the game. Both sides had taken a hammering, but the dignitary was still alive and this meant a victory to the Pirate Hunters!
That was yet another great game. Henry Morgan may well have cost a lot of points, but his extra fortune and other abilities were well worth those points even though this wasn't a sea battle. The 20" command range and 3 command points were extremely useful!
Posted by Richard Heath at 21:26 2 comments: