So, the plastering is complete...

I've given it a light sanding to smooth the plaster a little especially where buildings will be placed and glued sand on areas to texture it. 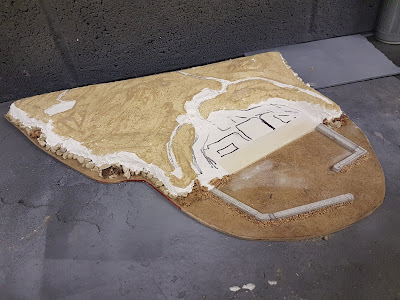 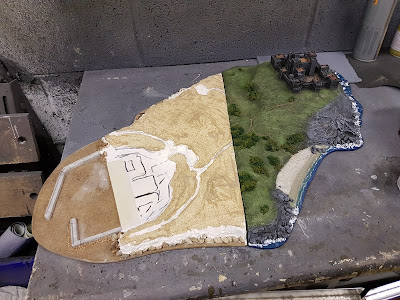 The extra buildings from Brigade Models arrived on Monday and I set to putting them in place. At first I thought they were way to small in comparison with the Langtons and whilst to a degree I think that is true I have managed an arrangement where I don't think that's too bad.

In order to get the buildings to sit flat on the slopes I've glued some pieces of card into areas I cut out of the polystyrene. 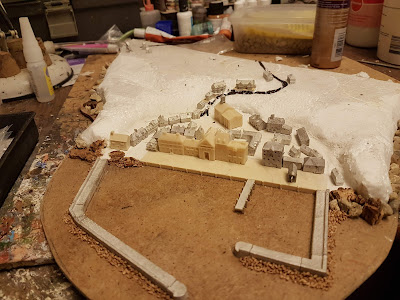 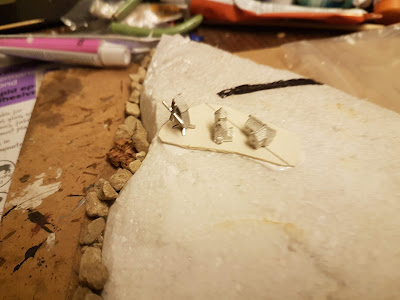 Last night I applied some filler to the polystyrene to make cliffs and smooth out the hills. I've decided after that to add two higher bits to the top of the hill. These will have filler applied tomorrow night. 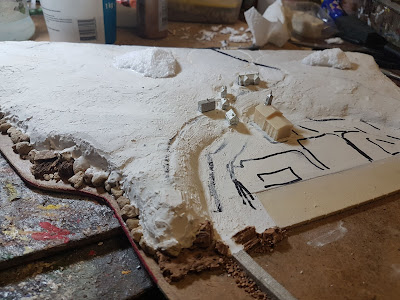 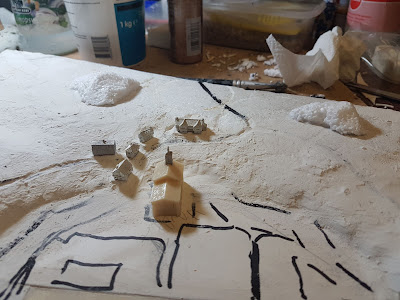 This weekend the three of us decided we'd like to play Lion Rampant. I looked around online and found this 3 player scenario: "Find the Lady 3 Player Lion Rampant Game on Graham's Wargames".

After a little bit of looking through our figure collections and we found that we had enough of the right models to play it, though we did vary the 3 retinues very slightly.

The game started with the Mounted Men-at-Arms of Sir Simon and Sir Roger fighting a multi-turn duel, which Sir Simon won, just. Meanwhile Sir William struggled to get anything to move. Eventually the retinues started to reach buildings, but every one was empty. This suited Sir William, who just set them on fire.

Eventually Sir Simon managed to steal the relic from the church (one of the 10 left ears of St Cuthbert known in Christendom) and Sir William found the Heiress in the very last building. He struggled for a while to beat the Militia, but eventually his Foot Men-at-arms routed them. In good time as well! As he retreated with the Heiress Sir Roger reached him with the remains of his Mounted Sergeants but they were beaten off easily.

In the end Sir William (me) won with the Heiress off the table (2 Glory) and 3 buildings burned (3 Glory). Sir Simon (Brendan) was second with the relic (5 Glory), but without the Heiress (-3 Glory). Sir Roger (Ed) looked on at the burned village (-1 Glory) and  looted Church (-1 Glory), and realised the mission for him had been a disaster...

We all enjoyed the scenario thoroughly. Having a real story play out made the normally enjoyable scenarios in Lion Rampant even better and we really want to try something like this again.

We had a couple of minor issues:

About 3 years ago I built myself a piece of coastline with a castle on it for use with 1/1200 Naval games, including Man O'War and Fighting Sail.

Soon after completing that I decided I enjoyed doing it so much that I'd make an extra bit of coast which could be used with the first to make a large island or separately on the edge of a sea board. I decided that I really wanted to try a harbour this time. I ordered some buildings and harbour walls from Langtons and then did nothing with them for 3 years.

Finally I've got around to starting work on it. Things are progressing well with the basic structure in place. The buildings are all just placed in position at the moment as I keep thinking I need more. I did a second order to Langtons and at the moment have an order with Brigade Models for even more. I hope they mix in all right!

I have added in some boats and a brig to populate the harbour. Here's what I have right now. Remember all the buildings and ships, etc, are just placed on at the moment. I will paint them all before gluing on. 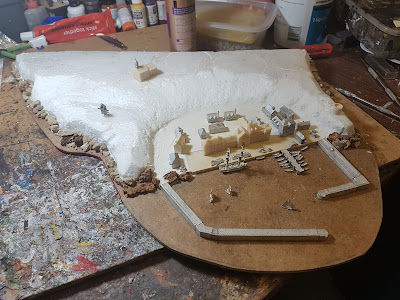