Custom board for The Battle of Vyazma 1812 - First Game

So the board is ready... The troops are complete (almost). Time to try it out...

This afternoon me and my son, Brendan, got to play the scenario I've been working hard on for the last month or so. I'd just finished putting together the last few troops needed.

Brendan decided he'd like to play the Russians. Something about the artillery being good... I'd beaten him up a lot with it in an earlier game.

So anyway, that left me with the French. After a bit of thought he decided to go for the historical Russian tactic and cut off Davout's route to safety. I pulled Eugene's Corps up to help and Poniatowski's to assist. This left the Russian cavalry standing off against Davout's infantry squares trying to screen movement out of the way.

The bulk of Davout's Corps just managed to move out of the way as Platov's Cossacks arrived on the table as Eugene's troops hit the Russian cavalry in the rear. In the nick of time the main Russian force arrived as well!

Davout began a scrabble to avoid taking too much damage from the Cossacks as he retreated, part of Eugene's force pulled back so as to stop another Russian corps cutting them off from the route home a second time.

What resulted was a relatively orderly retreat by the French with few stragglers being left at the mercy of the Cossacks and other Russian troops. A final stand near Vyazma began as the remnants fled.

On the last turn Brendan needed to rout just one more French unit to win, but it wasn't to be.

A close and hard fought game. Certainly a scenario with a lot going on!

I'm going to make a few adjustments: a few more Cossack units and additional Cuirassiers turning up late in the game as Kutusov did send some to assist but they turned up late.

As for the terrain, it looked great, but the static grass shed quite a bit. I'm going to have to seal it a lot more with watered-down PVA...

Posted by Richard Heath at 21:15 No comments:

This afternoon I applied the static grass and some other scatter.

I'd covered the roads, rivers and sides with Vallejo Liquid Mask. This seemed to work pretty well and peeled off without too many touch-ups required. I used the War World Scenics static grass applicator with "Spring" and "Farm Field C" 2mm grass mixes. Also some fine turf and clump foliage from Woodland Scenics. All applied with WWS Static Grass Basing Glue and Layering Spray.

I am now waiting for it to dry and considering what to use to seal it all down as I think it will shed a lot at the moment. 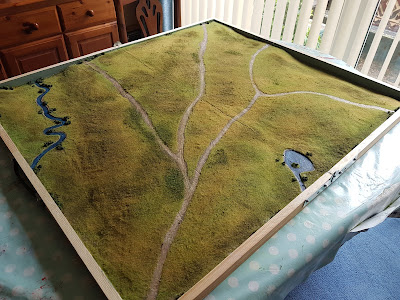 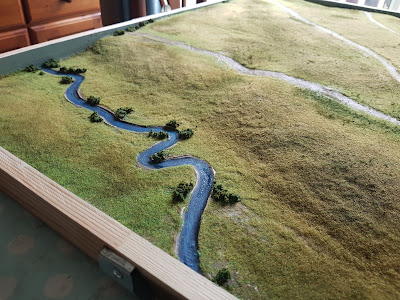 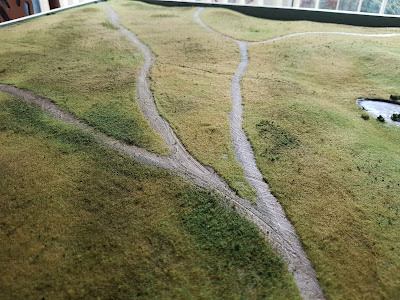 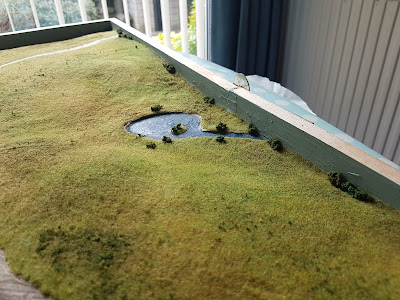 I've now finished applying the paint to the board.

The base coat was Bitter Chocolate masonry paint. The roads were then painted on with Vallejo Beasty Brown and afterwards the whole thing dry brushed in the same colour. After that further dry-brushes were applied: 50/50 Beasty Brown & Pale Sand; followed by Pale Sand on it's own. The roads got an extra dry brush of Pale Sand to bring them out further. This colour scheme is exactly the same as I use on almost all my miniature bases, so everything should match in well.

The river started with a coat of Vallejo Dark Prussian Blue, highlighted with Medium Blue and then the same with a Light Sea Grey mixed in. I know river's don't tend to look so blue, but I prefer it... I've tried muddy brown and I think it looks too dull for a wargames table in the smaller scales.

The inner edge of the board was then painted with Light Sea Grey.

Next will be the application of static grass. I'll use my War World Scenics Pro Micro Static Grass Applicator. I want to go for a blend of grass, with different shades mixed in, rather like my boards. With those it was done with a layering spray of PVA, but I'm not sure how that is going to work when there are bits of the board I really, really don't want static grass on... I will have to have a think before starting. 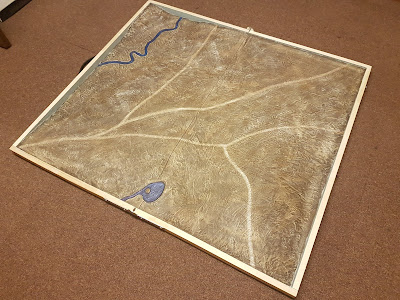 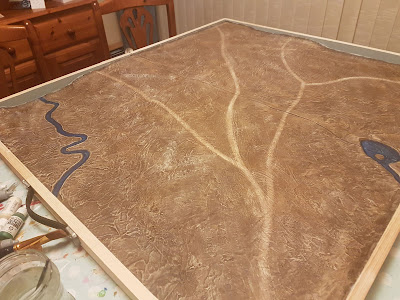 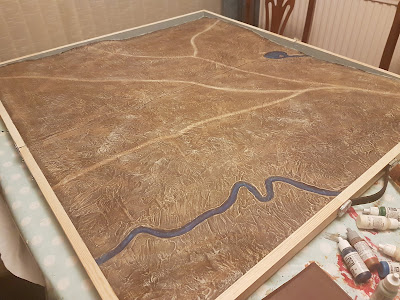 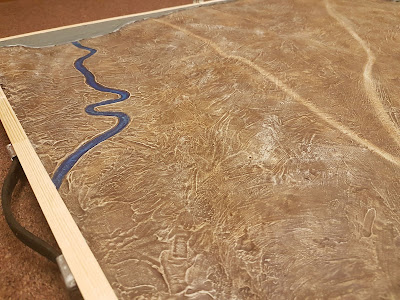 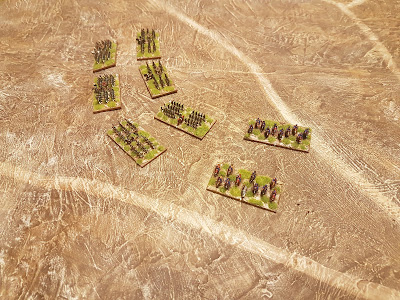 I've been wanting to try my hand at a custom board for a battle since starting with 6mm scale Napoleonics. In the last post I posted photos of the start of my solution to this, pasting tables with the hinges moved and legs taken off.

I was intending to do the Maloyaroslavets battle, but this has proven to be limited in tactical options and manoeuvre and the more I read about it it became clear that the battle was much more skirmish in size despite the large forces available, being based solely around the town, bridge and church.

I'd been introduced by my friend Gerald to the amazing reference book "The Greenhill Napoleonic Wars Data Book : Actions and Losses in Personnel, Colours, Standards and Artillery 1792-1815" by Digby Smith. This massive tome has details and orders of battle of 2000 land and sea engagements through the entire Napoleonic period.

I devoured this with relish and found the battle of Vyazma (also Wiazma and several other spellings). There was quite a bit online about this battle, but I wanted more. So got hold of a book references from a scenario I found for the battle. "Napoleon's Invasion of Russia" by George Nafzinger. I'd already got one of his books about 1813 and so looked forward to an equal level of detail. Unfortunately he doesn't give that much about the battle of Vyazma, though there is a little more detail. However I do really recommend the book, his account persuaded me finally against doing the Maloyaroslavets battle. That one would be far better re-fought using a much lower level game than Blücher.

The Battle of Vyazma was fought as the French column retreated down the road from Moscow to Smolensk. It was a few days before the heavy snow started and Davout's rear-guard corps had become slightly separated from the rest of the force. Miloradovich decided that it was a good time to sweep in and destroy this significant part of Napoleon's retreating army. What resulted was a complex rear-guard action as Davout tried to rejoin the main force and the other tail corps of the force tried to assist in his movements. All this harried by Cossacks and Miloradovich's several corps and heavy artillery superiority. Quite an interesting tactical challenge for both sides.

I spent quite a while studying the OOBs of both sides and came up with a scenario. The first try of that was last Monday and it showed me clearly that this was a much more interesting battle. I also tried out the new counters and ammo trackers I've made for the Russians. They worked well and I'll have to make some for the French as well.


So next I needed to start on the board. To spur me on I set myself a target and booked a game with Ed for the beginning of September.

The board was marked out and polystyrene cut and glued in place. Undulations were added by use of a heat gun. The centre wood strip being chiselled and sanded down. 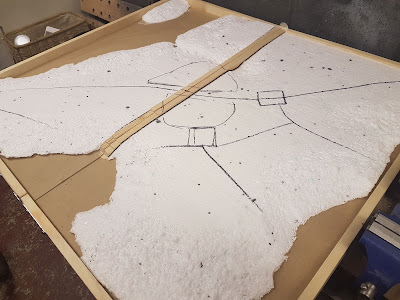 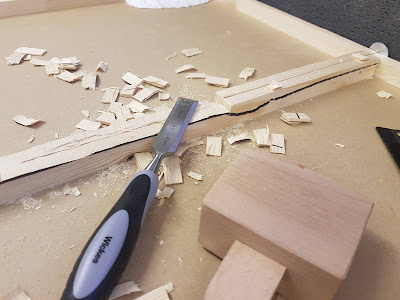 Then once glued I've been adding some filler. First some lightweight filler to fill in the large bits, a quick sand, and finally a skim over with more traditional filler to smooth it out. (both from Screwfix). 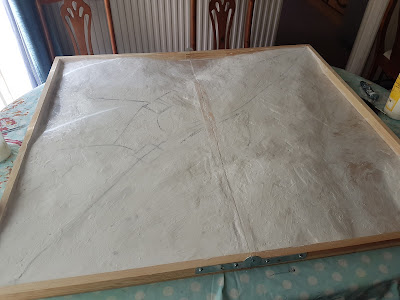 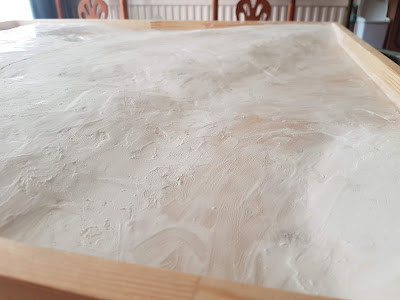 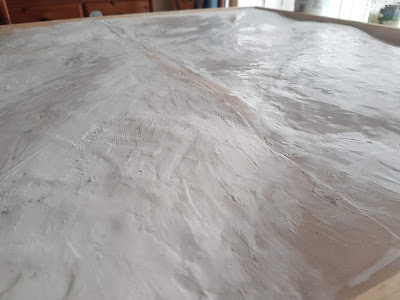 Next step is paint, a basecoat then paint on where the roads and rivers will go.... after that onto flocking.
Posted by Richard Heath at 12:27 6 comments: