Having finished the Frigate its now time to bulk up my forces to allow me to crew all my ships all at the same time. I've obviously bought quite a few extra sailors for this including some new Dutch ones, but at the same time I noticed that the French Buccaneers could take some Native American Warrior Musketeers. These looked easy and fun to paint so I decided to paint them first.

The first thing I noticed was that the castings were a lot cleaner than the rest of the Blood and Plunder miniatures I've painted. None of the miscast bits to cut off that I've noticed in figures that have had lots of castings done from the moulds. These look like the moulds have not been used too much yet. I assume this is because they're relatively new and unpopular minis. All the better!

As I suspected they painted up really nicely and a few base coats and washes is all they've really needed. Even the eyes were easy to paint.

These have to be some of my favourite models in the Blood and Plunder range and I think I may have to build a whole faction of Native Americans at some point. 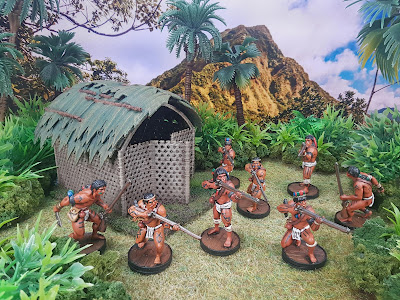 Email ThisBlogThis!Share to TwitterShare to FacebookShare to Pinterest
Labels: Blood and Plunder