Having played a load of sea and amphibious battles recently I thought it would be nice to try a land battle. We'd not used the tavern I completed a few weeks ago it would be a good chance to use it.

So it was Brendan's turn to be French and he chose French Militia and Julien Lambert as usual. I took English Buccaneers. We played with 230 points forces. Brendan had 4 units, with an especially large unit of Marins and I had 6 units with some of them quite small as I wanted to get two support units in, militia and natives.

The scenario was rolled for using the campaign rules, though we were not playing a campaign game and produced Breakthrough. Despite having +2 to my roll for attacker and Brendan having no modifier I ended up rolling a lot lower than him and Brendan ended up attacking, which he was not expecting and I think caused problems with his strategy.

The battlefield had my usual mix of jungle, stream, roads and an even larger village.

Brendan concentrated his forces on my right flank. I had placed some more over to the left initially and would have to move them to be more central. 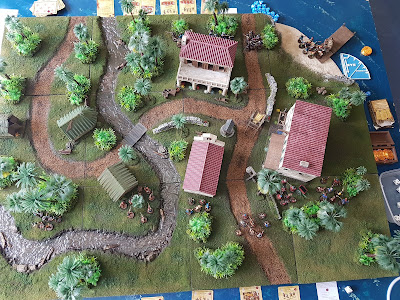 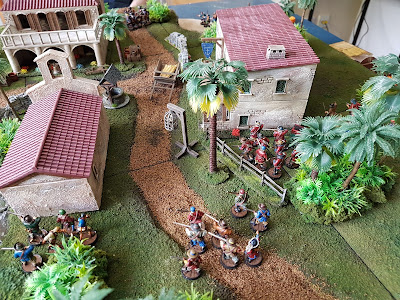 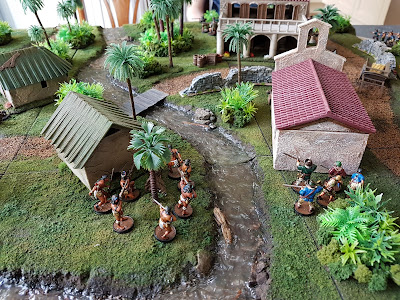 For the first time ever I remembered and actually used the Forlorn Hope's Vanguard special rule. This allowed an extra free move after deployment and I quickly moved them into an upstairs room of the tavern. 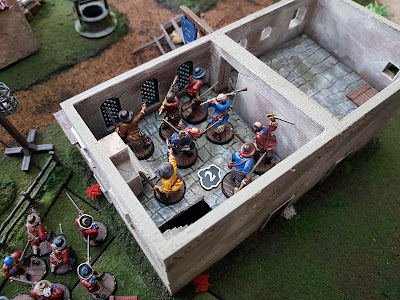 From here they were immediately able to put down withering fire on the French Caribbean Militia who had advanced a little too far in the activation before. This killed half of the Militia and put significant fatigue on them. This was a massive loss for such an early stage of the game. 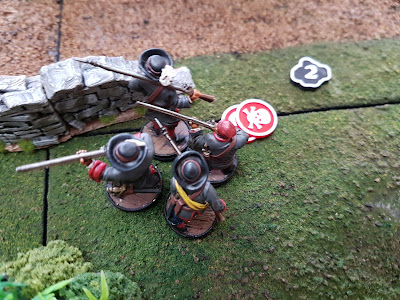 A second first use of a special rule lead my natives to Scout through the river. This did not slow them down at all. They opened fire on the Boucaniers with minor success. They got 3 reload markers though because of their Slow Reload special rule. 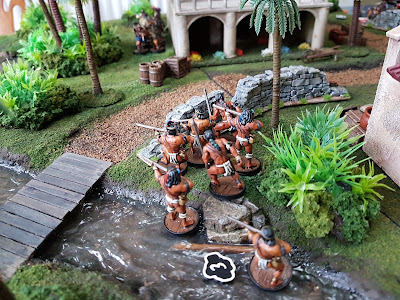 I then promptly forgot to take photos missing out entirely the exciting action of Brendan's large Marins unit that charged down my right flank behind the tavern only to be shot to bits by combined fire from the English Caribbean Militia and the Freebooters. This left Brendan's French force massively reduced in numbers and him wondering how on earth he was going to win this.
Having dealt with the flank attack I moved the English Militia and Freebooters into the tavern and my Sea Dogs with Muskets into the hermitage. Brendan moved his Flibustiers and French Militia into the villa with the Boucaniers lurking around on the far side of it. 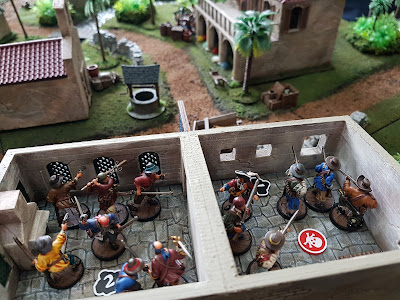 Brendan managed to shoot up and destroy the natives who had been hiding behind the stone wall and after that we went into several fairly static turns, shooting each other up from hard cover. This didn't have much effect on either side, but the French were not progressing towards their objectives and it looked like they were doomed to lose. 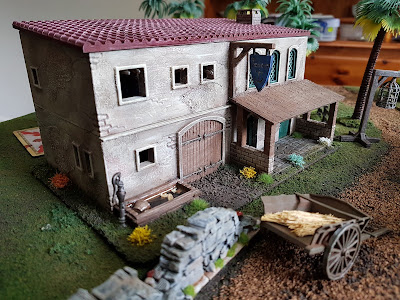 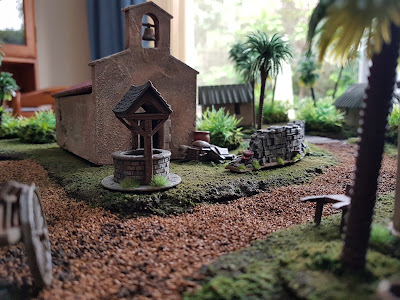 So Brendan needed to do something pretty drastic. He decided to run the Boucaniers down the road across the stream to try and "Breakthrough" as he was supposed to. This he did but picked up a point of fatigue in the process.
Then I responded.... I'd held a small unit of Sea Dogs back from the main firefight. They only had pistols and would have not been of much use there. Instead they did exactly what I planned and dealt with the sneaky move. They charged around the corner of the building they had been hiding behind firing their pistols, which though fairly ineffective managed to put another fatigue on the Boucaniers. This meant they could not defensive fire and the charge went home. Several Boucaniers died and another fatigue went on them causing them to fall back shaken. The Sea Dogs followed up keeping contact with the retreating Boucaniers.
The next turn I chose my highest initiative card and immediately attacked again with the Sea Dogs. This wiped out all but the French Captain but put huge numbers of Fatigue counters on him. As a result he routed as well. 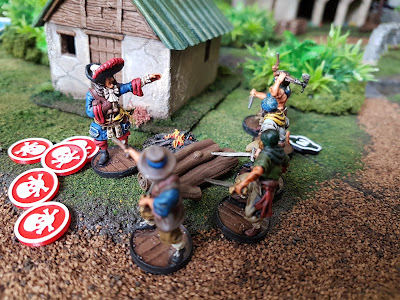 This was the last turn and Brendan had lost his captain and had a lot more Strike Points than I did. He was going to be completely unable to recover from the situation and decided to capitulate.
This was a rather one-sided game. I think right from the start Brendan was struggling. He had not planned on being the attacker and was a little too hasty in his advance, committing and losing his key assaulting unit far too early. Using Stinkpots as cover and not attempting to assault quite so quickly would have helped. I had half-again as many units as he had and I think that also helped as though a couple of my units were very small the extra cards and units allowed me more tactical choices.
This game showed us again that not only is Blood and Plunder an excellent Sea and Amphibious game but also even as a straight-forward skirmish system it is really quick and clever with loads of strategy to consider.
Posted by Richard Heath at 14:51

Email ThisBlogThis!Share to TwitterShare to FacebookShare to Pinterest
Labels: Blood and Plunder, Pirates