I wasn't expecting to be able to post about an amphibious battle today. No way was I going to be able to complete the coastline pieces for my Terra-Former tiles... But somehow all the groundcover including a beach came together last night and to my surprise it was all dry this morning!

The tiles are magnetised like the rest of the Terra-Former system and I've used cork bark for the cliffs along with sculptamold to sculpt the rest. I have plans to make a whole lot more coastal pieces, these are just the first ones.

It all sat on my new Tiny Wargames sea mat, which arrived this week. I'm very pleased with the new mat and it'll be usable with all my naval wargaming in various scales. My old boards were looking a bit battered and worn and it was time for an upgrade.

To finish it off I quickly printed and painted the wooden jetty and we got it all onto the table for a game this afternoon.

Brendan chose to play the French and defend and I built him a French Caribbean Militia force around Julien Lambert. I took English Buccaneers with a sloop and two long boats and an inexperienced captain. 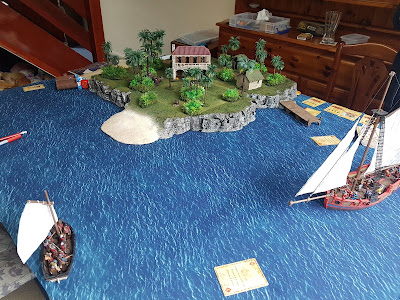 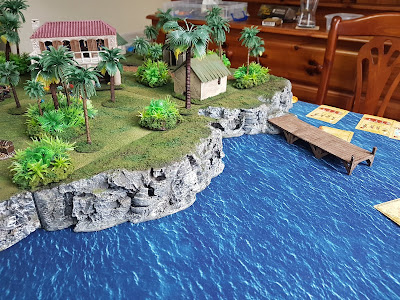 We were playing "Raid" and there were two objectives. One in the villa and one not far from the beach.
I set up with some troops in the sloop and some in one longboat. The second longboat towed behind the sloop. I didn't want to pass the land too fast with the sloop so set the sails quite low.
In the first turn the wind immediately dropped. This left me moving far too slowly and meant I had struggle to change sail settings and decided to switch from sails to sweeps on the long boat. Nothing much else happened, though we did trade shots to no effect. 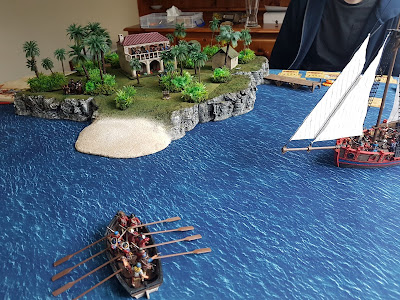 In the second turn I launched the second long boat with the small Fornlorn Hope unit. I soon realised that they may start to block the line of fire of the cannons, and if they went for the jetty as I had originally planned would get shot up by the Boucaniers in the building overlooking it. So I dithered a bit. 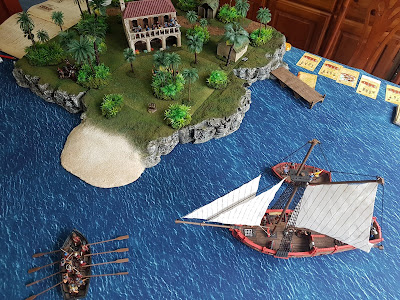 Turn 3 and my long boat landed. The militia on-board traded shots with French Militia on land, both taking casualties, and the Sea Dogs charged up the beach at them to keep them busy.

The Forlorn Hope rowed up to the cliff next to the beach and climbed up. 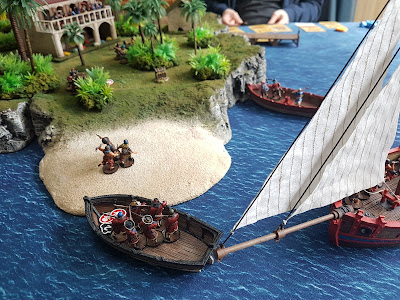 The Freebooters with the captain jumped into the shallows and the militia climbed out of the long boat.

The French Marins charged at the Forlorn Hope unit on the cliff edge and wiped them out. 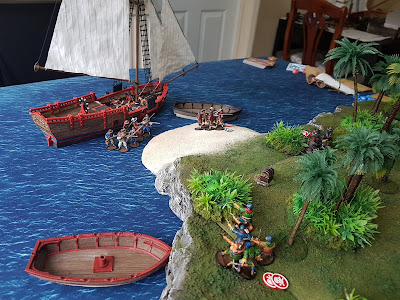 The Flibustiers came out onto the balcony of the villa to get a better shot and the Boucaniers crept around the side of their building as the attack had gone elsewhere. 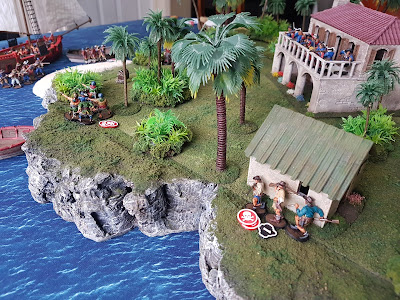 The Freebooters advanced up the beach towards the big chest of gold. They shot at the Marins killing many of them, the remainder ran for cover. The English militia joined the melee with the French militia who collapsed under the extra pressure. The Filibustiers realised the defence of the objective needed support and came forward. 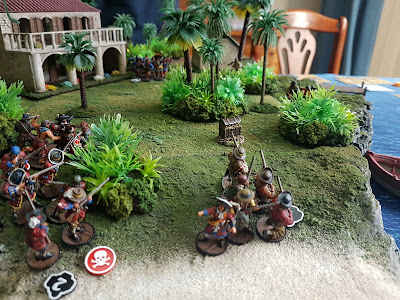 Then they charged right at the Freebooters. It was a long charge for them, and the freebooters held their ground. The English Militia saw this and responded, charging into the Filibustiers flank. This devastating attack forced them back and the English pursued.

The Bouncaniers saw a sneaky move. They moved up just close enough to contest the objective, but not close enough to be in melee. This meant I'd have no chance to kill them as there were no turns left. 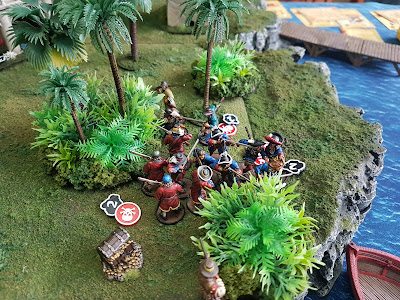 My only chance to take an objective would be the other one over by the villa. Luckily this was left relatively undefended when the Flibustiers ran forward. I'd decided to sneak a couple of Sea Dogs over there just in case. Seeing this Brendan had sent a single remaining Marin over as well. I would have to fight for that one as well! 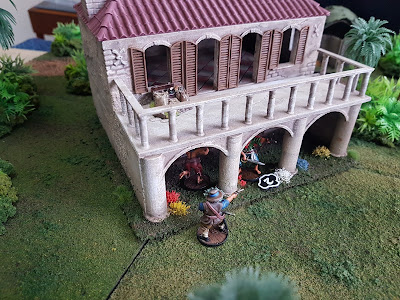 When it came down to it. The lone French sailor was valiant indeed. He fended off the attacks from my two sailors with elan and remained contesting the objective at the end of the game.
So, at the end both objectives were contested and both sides had taken similar numbers of casualties. We had to count the points of the dead pirates to determine the winner. I had killed very slightly more French than Brendan had killed English, so I was the winner... but it was far too close really!
That was quite a game! We had to bring all sorts of rules into play. Most flowed well, but I was unsure about what happens when a long boat hits the beach. In the end we just ruled that it stopped and only when the sloop collided with it did we start to move it again.
So now I need to get more coastline pieces completed. These worked really well, though the ground near the top of the beach was a little steep and the models kept falling over.
Posted by Richard Heath at 19:39