I've had quite a busy week.

After last weekend's game of Liber Militum Tercios I decided I needed to get some movement trays made for my ECW minis. I decided that to make them I'd need a 3D Printer. After some investigation I ordered a Monoprice Select Mini V2 printer. This would take a while to arrive so I decided in the mean time to get some extra units painted.

I decided to paint some more pike and shot, this time in the form of the New Model Army, red coats and helmets on the pikemen, the feathers cut off the Heroics and Ros minis. 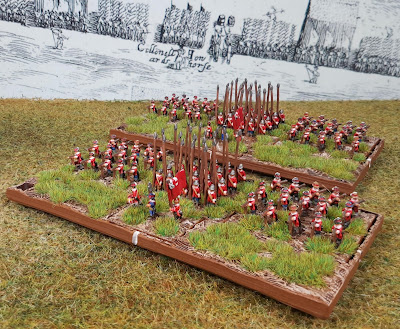 I also painted up a couple of units of dragoons, one for each side. I couldn't decide whether to put the horse holders on the bases or not. In the end I decided for my current project I would. This may change if I play For King and Parliament, where the horse holders can be left behind, but for Liber Militum Tercios it does not matter. I also don't need mounted dragoons yet! 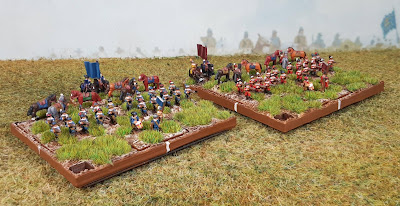 Both these photos show examples of my 3D printed movement trays. They have space for a small dice to keep track of wear (damage) and have the centres of each side marked accurately for Liber Militum Tercios. Everything is magnetised with magnetic sheet so switching units around is a doddle but nothing falls out!

With the movement trays such a success I even went ahead and started 3D printing the actual bases. These have cut-outs for the Heroics and Ros bases and the acrylic sealant I always use works as glue and filler around them. These have again been a wonderful success and very quick to print!