We had our second game of Liber Militum Tercios today.

We added in all the commander rules this time, with Traits and Virtues and also some extra rules with dragoons and New Model Army regiments. These all worked well. Total points each side was 925, so just under the "medium" game size.

The scenario was the second in the book "Determination" with the objectives being to get more of your troops onto the opponent's side of the battlefield than they get onto yours.

I won choice of side, a key thing I think in this setup. I set my Royalist troops up in a long line, whereas Brendan's Parliamentary troops were a little more clumped up.

We both decided that we needed to move fast towards the centre, so apart from the artillery every unit had a Run order on it in the first turn. I advanced straight forward. Brendan swung two of his P&S units round my left flank and the New Model Army units down the middle. His Dragoons moved as far as they could, but a lake and my cavalry blocked his way.  Also had some artillery lined up to deal with those. 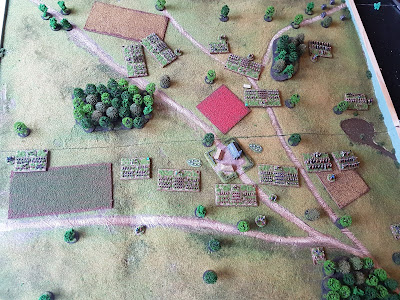 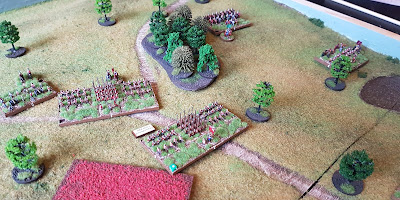 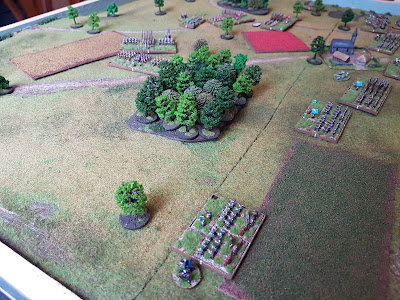 In the second turn I advanced a bit further taking the village and shooting started. I charged my cavalry in and it bounced really rather badly! Brendan's cavalry still held back. My dragoons sneaked around to his rear.


In the third turn Brendan's two units on the flank ignored the dragoons and marched towards the objective, my side of the table. A sensible move as there are no points for casualties in this battle!

In the centre we did a lot of shooting the front one of his New Model Army battalia took heavy losses, but stood their ground.

Brendan charged my cavalry with his, I countercharged and won, but didn't break his horse.


In the fourth turn things didn't change much. We shot ineffectually at each other and Brendan brought his flanking force around the wood.

The fifth turn was the key. This is the first turn when victory could be assured. A five point advantage would win it for me at this point with a major victory. I saw that I could just step several of my units over the centre-line something that Brendan could not do. So I did just that.

We did more shooting, but nothing died, again! I had 13 points over the line, Brendan just had 6. That was enough for a Decisive Victory for me.

It was odd not having any units actually be destroyed, but we did both enjoy the game and it played fluidly. The full commander rules made a lot of sense, though I did keep on having to remind Brendan to use them and I kept forgetting myself. They gave some flavour with my CinC able to reveal enemy orders and add an extra dice to the unit he was attached to in melee. Brendan had his CinC adding a similar dice to his artillery shooting.

I do like how artillery does a very small amount of damage fairly reliably and tends to disorder units most of the time as well.

Overall I'm very pleased with these rules. I'm not sure what units to add in next. We'll be carrying on working through the scenarios one-by-one, the next one is the first Attack/Defence scenario with lopsided objectives. I'm really looking forward to this one!