This afternoon saw our first game of Liber Militum Tercios using the English Civil War armies in my last blog post. Brendan took the Parliament forces and I had the Royalist army.

Objectives would be kill points with the C-in-C worth 3 points, Pike and Shot units 2 points and Artillery and Horse units 1 point each. On turn 5 and beyond there would be comparisons of these points for each side with the game ending in victory for a sliding scale of points advantage. The end of turn 8 always would finish the game, whether victory for one side or a draw. This is simpler than it sounds and really works. I was very impressed with this mechanic!

Anyway, being a fairly standard face-to-face battle we had some initial terrain to set up and then deployed our troops along our deployment zones.

The first couple of turns were the usual jockeying for position that goes on in most wargames. I sent my cavalry wide down my right flank and advanced along the front. Brendan took the village with one of his pike and shot blocks and advanced between there and the wood on his right. The field and village would be key to this battle. 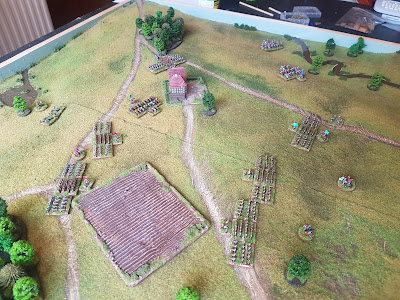 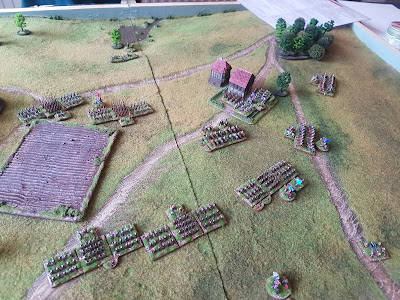 At this point some fairly ineffective musket fire began. Each side trying to soften up the opponent.

Brendan did charge his cavalry home against a pike block, but bounced and left his cavalry open to a further charge by one of my Royalist cavalry units. This did not go well for either of us, though it was my cavalry that had to retreat. 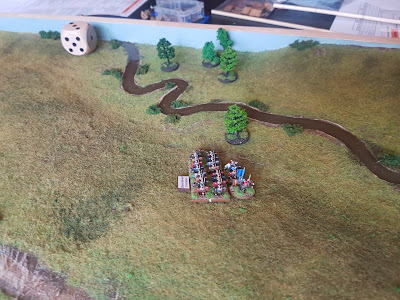 In the next turn he ran his cavalry to the rear for safety only to find my other cavalry unit waiting for them. 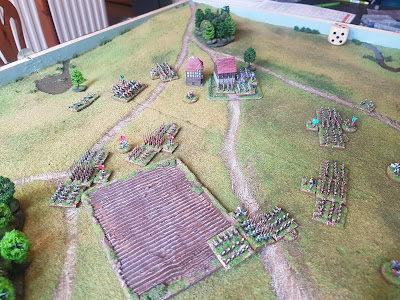 The musketry fire continued in the centre as the infantry tried to soften each other up and some of the units started to look not as fresh as they had done.

I charged my cavalry home behind his lines and failed to destroy them again, they just ran away again. Was anything going to rout in this game?

Then in the following turn my cavalry realised they were round the back of one of the pike and shot blocks. One that had been successfully softened up by muskets. They charged home and forced it to retreat, but there wasn't room (more on that later) and the unit was destroyed. 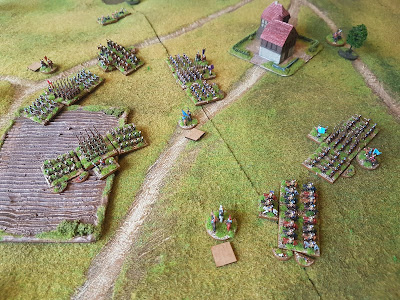 This had left one of my pike and shot units stuck out in the middle and the Parliament unit in the village spotted it had an open flank and charged it. Several rounds of "Bad War" ensued, with multiple drawn pike combats resulting in more and more pike combats. Eventually with Wear stacked up on both sides Brendan beat me and my unit was destroyed. His didn't look too healthy though and wasn't going to last much longer.

His cavalry under heavy Wear decided foolishly to attack my cavalry and lost, finally being destroyed, but in the following turn I had to run my cavalry away to ensure I'd not lose them as well to the artillery.

This final 8th turn had his weary pike and shot unit attacking again this time against my unit in the field with help with his other still fresh unit. between them they destroyed it, but I destroyed the first of those units with the remaining one of mine.

It was carnage in those last few turns, absolute carnage.

This is the final state of the battlefield... 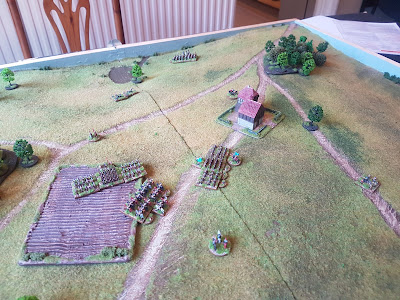 I had lost two pike and shot units, as had Brendan, but he'd also lost his cavalry unit. This gave me a one point advantage and got me a very, very minor victory.

We had a only a couple of issues with the rules. The main one with the retreating and disengaging rules, which it says "is an involuntary move toward the rear of the unit". We couldn't decide whether this meant exactly in a straight line to the rear or whether a pivot or slide to avoid obstructions like friendly troops would be allowed. We allowed the pivot the first time, but on the second it seemed a bit daft so said we'd rule it had to be direct from then on. Obstructions only block if the centre-point would pass through them anyway, so perhaps not an issue. I'd be interested what other players rule for this.

(Edit: Looking again at the rulebook the "Overlaps and Angle Correction" rule might make this work more fairly)

(Edit again: I found a fan version of the game in Spanish here. This adds in the word "directly" to the retreat and disengage rules which makes the answer clear, no pivot or slide. It also extends the Angle Correction on Overlaps rule to allow sliding to the side, which makes things fairer. I will definitely be using both of these changes)

Overall, we thoroughly enjoyed the game. It flowed nicely with the alternating actions and the wide flanking movements of the cavalry. The command system worked well with once out of command and damaged orders not be a sure thing at all. We didn't use the Command Traits and Virtues in this game, but will do in future ones.

We're looking forward to trying out more units and some more of the many pick-up game scenarios that are in the books. Maybe also building towards a historical scenario at some point as well. I have quite a few of those from other rule systems that would convert well.

I'm also in the process of making movement trays for the troops. I'm pleased I based them up on smaller bases as it gives me more flexibility with rules systems, but formation changes don't happen in these rules. Movement trays will make the game less fiddly but more importantly will protect the pikes!

Normally I'd get them made from MDF by one of the commercial enterprises, but with the lock-down still in effect I know they will be slow with orders and probably a bit unenthusiastic about a custom one at that. However I am stuck at home, still working, though I do have a bit of time on my hands.

This happy coincidence has finally given me the reason to purchase my first 3D printer! Yikes! It should be with me in a couple of weeks!
Posted by Richard Heath at 23:40