Another Sunday Afternoon another Liber Militum Tercios game against Brendan.

On our third game the rules really are flowing well. We're not having to look things up hardly at all and have no real problems working out what should happen. We're also still enjoying the battles massively and looking forward to more.

This was the third scenario in the main book, "Stubborn Defence" and was the first with lop-sided objectives. The defender had to kill the attacker's units whereas the attacker had to break through the defensive lines and get units into the defender's side of the table.

Add to that half of the defender's troops would be up front and already with a point of Wear (damage) and the rest would be far in the rear and acting more as reserves.

This time I'd added into the armies some more cavalry. Haselrigge's Lobsters (Cuirassiers) and some standard Horse for the Parliament army and some Veteran Cavaliers in the form of Prince Rupert's Horse for the Royalists. I'd also just finished painting a massive quantity of hedges and walls from Battlescale and some 3D printed buildings using STL files from Eskice Miniatures. We couldn't get anywhere near all the hedges and walls we got with our order using the Tercios terrain rules, so you see just a small selection.

I was again to take the Royalists and Brendan chose to be the defender. Here is the initial setup. Attacking Royalist forces far left; Parliament Vanguard in the middle; Parliament Reserves far right. All Cavalry ended up at the bottom of that picture, the cavalry fighting would mostly be over those hedges at the bottom, middle. 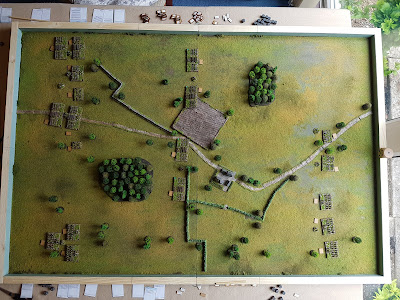 
Learning from previous games about the ineffectiveness of shooting in turn three we got in and started some melee. Both sides saw successes and losses on both flanks. Neither side seemed to have an advantage, though the royalist lost a unit of Pike and Shot in the centre. But the victors in that battle were not much better off.

Turn four was good for the Royalist attackers. The dragoons remembering the objective advanced into a gap in the Parliament lines. The cavalry fight across the hedges continued.


Turn five saw some excitement. The Royalist CinC, saw he could get to the dragoons and so with those ran across the centre line to score objective points, whilst doing so he ran over the Parliament CinC killing him! No points for that, but it didn't make the Parliament forces happy!

On the hedges the Parliament horse commander used a special trait to confuse the orders of one of the Royalist horse units. This resulted in them charging Hasselrigge's Lobsters across the hedges... this should have been a disaster, but the Lobsters retreated from the combat leaving another huge hole in the Parliament lines!

Turn six saw the Royalist troops take advantage of all these holes and advanced plenty of troops across the line to give a "Clear Victory".

Again a brilliant game. Enjoyed by both sides.

More next week!
Posted by Richard Heath at 00:45