I had the idea a little while ago about running Frostgrave games in the Master Maze sets that COGS have. They've been stuck in my loft for over a decade unused and it was about time they got used!

Anyway, I built up a layout and posted photos over on the Frostgrave facebook group asking for suggestions. Everyone was very positive, but I think there was a general agreement that there should be more...

So I did some research and found that Master Maze in the form we have it is still available, though just as massively expensive as it was when we bought it years ago. So I looked around and found Hirst Arts.

Now I've been wowed by pictures of what is possible with this system for many years and I was impressed to see that some people had managed to make it compatible with Master Maze. The idea of Hirst Arts stuff is that you buy some latex moulds and cast your own dungeon or castle (or sci fi, etc) bricks out of plaster (or resin) and then glue them together to make whatever you want. The range of moulds is very extensive and there really are few limitations as to what is poissble.

So I chose a couple of moulds and put them in the basket at http://www.hirst-arts.co.uk/ (a UK reseller).... My mouse pointer hovered over the "Buy" button...  I'd done this many times before over the years, but this time I clicked.

A few days later the moulds arrived. By then I'd bought all the stuff I needed to cast some blocks. After a shaky start, but no disasters, I got the knack at casting blocks and now have boxes and boxes of them ready to use. I started with Plaster of Paris, but have moved on to Crystacal R which is supposed to be more resilient. A 25kg bag cost £35 posted, so it's not that expensive. I've also bought 2 more moulds and am eyeing up even more. (I now have #70, #71, #260 and #701)

So what have I been making?

Well first of all there's the task of extending the Master Maze dungeon. I first started with some basic corridor sections, but have decided that the strength of Hirst Arts moulds was in the detail and accessories, so I've been working on whole rooms. 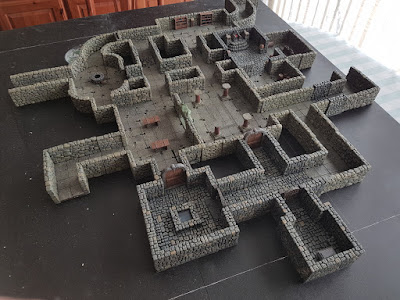 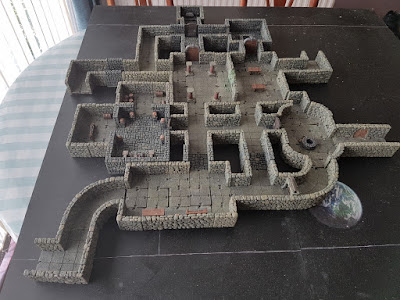 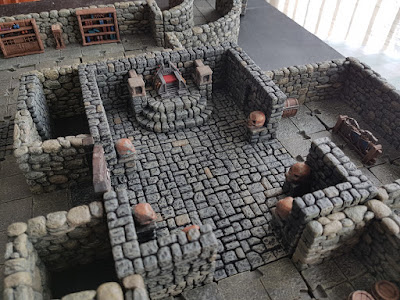 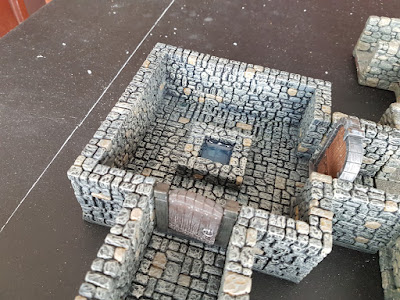 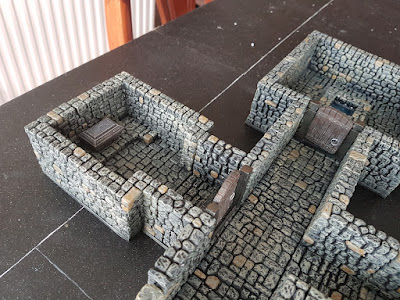 This has been dressed with some of the furniture from Dungeon Saga. I now have a reason to paint up the other set I of this I got with the kickstarter. I think there's now enough dungeon for the Frostgrave game, however I think I will make more... but first I have other things to do.

There is a scenario in Frostgrave that requires 3 linked towers so I think I'll have to have a go at that. They're supposed to be ruined so I'll probably have to buy the ruin mould.

Anyway, before that I want to make some steps down from the raised areas I have for the normal Frostgrave city. Rather than just have simple steps I've planned out a whole modular system of raised walkways and steps. The first of these is pictured below..
. 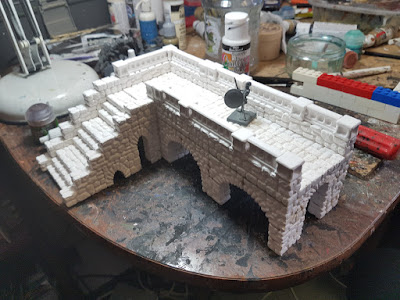 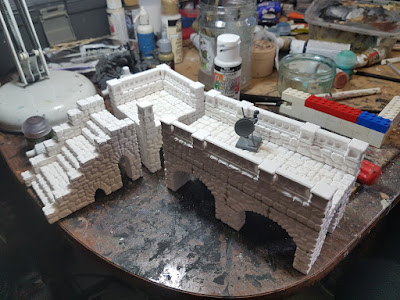 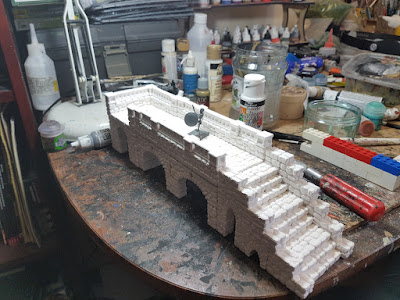 Next up with these is to make the piece that will reach onto my old raised area of city. Oh and of course these should be compatible with the dungeon as well.

There is a good reason for doing these before the towers though. I want them to be compatible and so the walkways will need to line up with something, a door or a roof, etc. on the towers.

Of course I also have made something else. One of my Wizard's favourite spells is "Wall" so I've made a few markers of the correct size. They're split into 4" and 2" sections, the 2" sections should work ok in the dungeon. 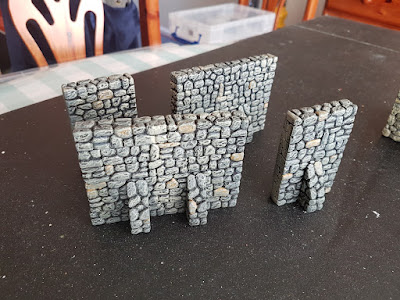