When I first started converting my old Warhammer army over to Kings of War I saw the listing for the Steel Behemoth and thought it sounded cool. I looked around and saw many different ways to create one, from using the old Empire Steam Tank (with a new driver) right through to scratch building one. Though an option I always preferred was the steam tank range from Ironclad Miniatures.

Then I read the rules and realised that with such a speed of just 3 inches it would take ages to get into contact with the enemy and then with a Melee of 6+ it would be lucky to do any damage. I stopped even considering having one.

That was 1st Edition though and in 2nd Edition the Steel behemoth has been seriously overhauled. The Speed has been increased to 4 inches so that it can keep up with the rest of the army and it's melee has improved to 5+. Time to think again... 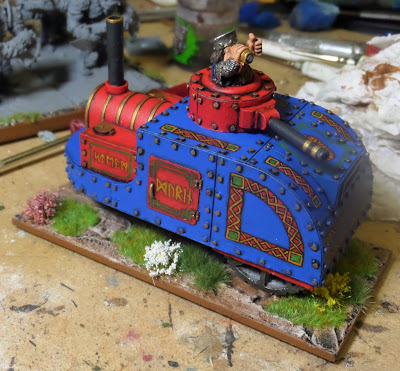 I've been working on every army but the dwarves recently, but when visiting Fiasco last weekend I stopped at the Ironclad stall and had chance to properly consider my options. In the end I plumped for Steam14. It fits perfectly on the required 100mm x 50mm base.

When it came around to building and painting it I realised I needed to make it look more dwarvish and less Victorian. With that in mind it was an easy choice to stick an old 80s citadel dwarf as a commander. Though cutting a 20+ year-old miniature in half did seem brutal, I consoled myself with the fact that it was a duplicate in my collection. I added the rim of a large eyelet to act as his cupola. 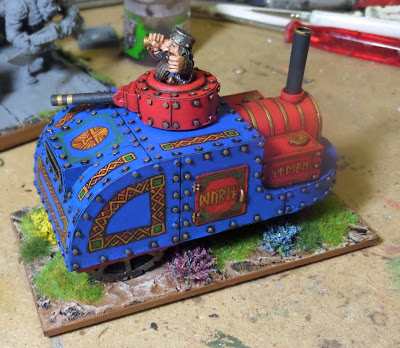 Then it was on to painting. I wanted to go with a more medieval scheme so painted blue and red as with some of my other dwarf units. I soon realised that there were just too many plain flat areas on the model and that some sort of decoration was required. I googled for "dwarf banners" and soon had a few designs to copy. Little did I know I'd end up covering almost the whole model with intricate brushwork. 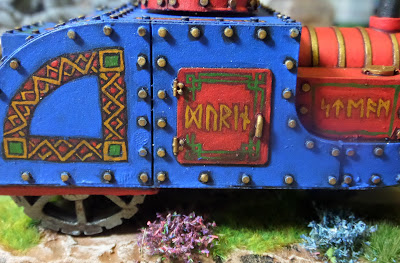 This is by far the most decorated model I've ever painted and I'm really pleased how it's come out.

It'll be being used on the big Kings of War game at the Hereward Wargames Show in Peterborough this weekend. Why not come and say hello. 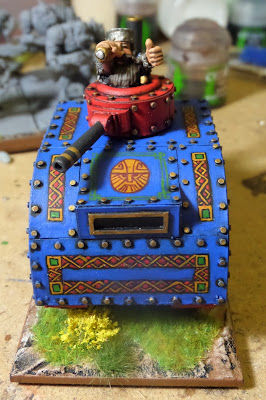