When I first srarted Dreadball the team that most interested me was the Robots, so when the Dreadball Xtreme Kickstarter had the Mechanite team in it was going to be my favourite. 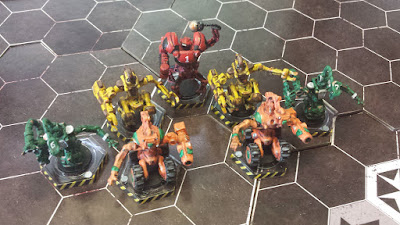 It's not my favourite any more....

First of all I spent 2 or 3 hours pouring over the rules in the Season 5 book trying to get the parts supplied into a team with more than the minium 6 players at 100 points. Even with the use of a spreadsheet this was no easy task. I really hope Mantic have a team builder planned for this team!

Once I decided on the team structure I built up the models. This was fiddly and was not helped since I can't use superglue due to hypersensitivity to the fumes and had to wait for two part expoxy to dry. Then to really annoy me every single glue joint failed. Arms, legs and heads just came apart in my hands.

I switched to another brand of expoxy and also did some pinning and the second time round they stuck together far better. Though still if you pull at a limb it will come off.

So then I started the painting. I decided on a brightly colours scheme with colour coded roles for the players. Part way through I looked at some of the Jacks... Hang on... They didn't have the correct arms to pass the rules... ARGH!!

So with some changes of limbs to models and the resolution that I'd only have 6 players in the team of 100 points I continued.

Finally today shortly before writing this post I finished them. They were by far the most painful Dreadball team to date.