The extra European Sailor models I painted up last week allowed me to deploy a much larger force of Sea Dogs and Brendan was able to use the European Sailor Musketeers as Miliciens. 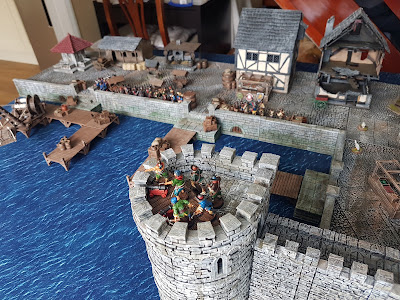 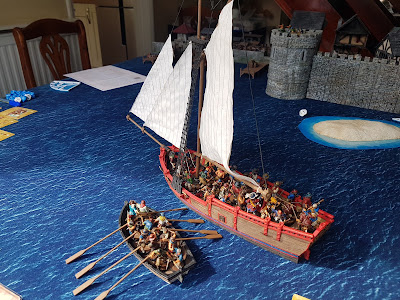 His force mostly had Elusive and had a stone harbour wall to hide behind. This meant he had -2 bonus to his shooting save! 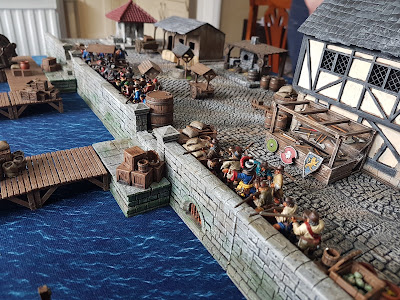 However what that did was deter me from shooting at them. Instead I shot, with some success, but not enough, at the artillery on top of the tower.

Eventually I grappled onto the docks and started to run ashore, into a hail of lead. I had my Forlorn Hope throw stinkpots to cover my charge and grenadoes to soften up Brendan's troops, but the latter misfired killing some of my troops. 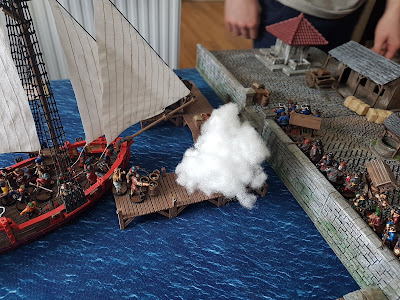 Meanwhile my longboat finally rowed up to the docks and started to unload, the large Sea Dog unit it carried swarming up to fight the Flibustiers who ran. But the Milicies counter-assaulted pushing them back. 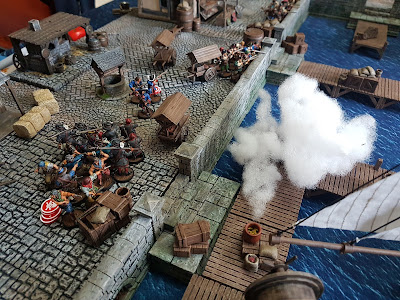 With my forces massively depleted and my captain taken as a casualty at the end of turn 5 my force struck.

A very difficult assault this one. Brendan had a very well defended position and I had a disorganised and badly timed assault. I should have had my sloop and longboat grapple closer to the land saving my troops several actions of running along the piers. I should have arranged for my troops to attack together rather than being spread amongst several turns.

So a learning experience, but a great game nonetheless.