I've been so busy my stock of self adhesive static grass tufts has run out!

I make these in large batches so that I have enough to last several months. This time I thought I'd take some photos and post a blog entry to record how I do it.

The main tool is a Flock Box. The version I have is I believe the first version ever produced and I've had it for about 6 years now. There are other better versions by several manufacturers now but the one I have seems to work fine so I've stuck with it. 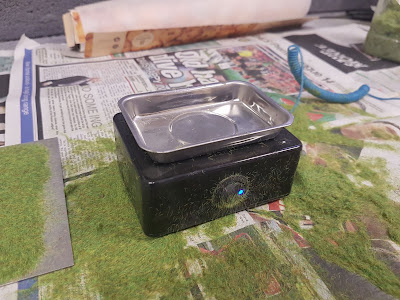 This old version is battery powered and has a lipped tray on top. The newer ones are mains powered, but I've found no real issue with the battery I have in mine. The lipped tray is not so good and is best fixed to be like the newer versions by laying a flat piece of steel on top.

The next thing you need is the right glue. The stuff needed is "carpet tackifier", but that comes in huge tubs which cost quite a bit. Luckily WWS sell it in smaller containers on eBay and their site as "Static Grass Tuft Glue". I've had a small tube for the 6 years I've been using this and have only just ordered a new tube of glue.

This glue is dotted onto silicone Greaseproof/Baking paper fastened to another small piece of steel with rare earth magnets. 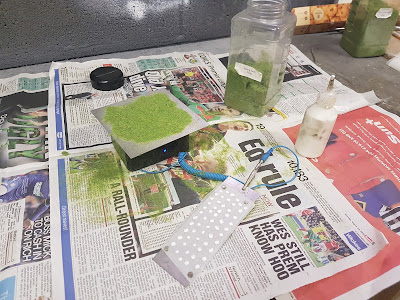 The terminal on the Flockbox is then attached and the plate waved over the static grass, which jumps across to stick in the glue. 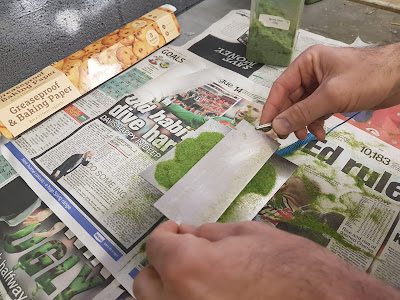 After a while there is enough static grass on the paper and the rare earth magnets can be slid off and the tufts left to dry. 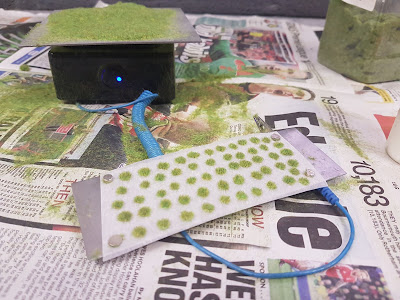 I keep going at this until I have quite a good stock of tufts which will last me several months. 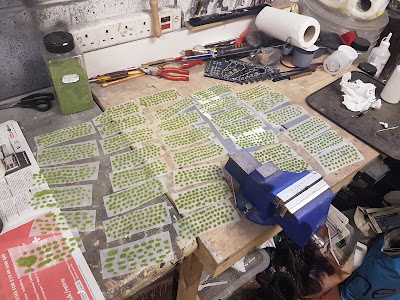 You'll note that I've only worked with 2mm Spring mix static grass. I have tried making my own longer tufts and flowers, but I've not managed to get them as good as the commercial ones that are available. I still buy those from Tajima1.

These 2mm tufts are used on all my bases, no matter the scale: 6mm through to 28mm. They can just be peeled off the paper with tweezers and placed on the bases where I want. They can be re-positioned as needed and are fairly easy to remove from old bases as well.

No messy loose static grass gets anywhere near my minis. You can even cut them into smaller pieces with scissors whilst they're still on the backing sheet.

Doing this really has increased both the quality of my bases and my rate of production of minis.
Posted by Richard Heath at 18:04

Email ThisBlogThis!Share to TwitterShare to FacebookShare to Pinterest
Labels: Basing