This afternoon myself and my son, Brendan, played the first game with the new miniatures I've been painting. The first battle in the 1813 campaign, the Battle of Möckern.

Actually several small clashes over a wide front this is quite a small engagement which didn't result in much really as the French pulled out quite early. I'm basing our battle on the scenario in the "We shall meet in Vienna" scenario book by The Wargaming Company. This is intended for their "Et Sans Resultant" rules and I've had to do quite a bit of modification to get it to work in Blücher's normal scale and have referenced the Old Meldrum scenarios and the Nafzinger books quite a bit.

Anyway, here are the forces ready for the battle.

The battlefield itself is very wide and the scenario I was basing the game on was also very wide. I decided to compress it all to fit on my normal table.

The river is the Ehle and though narrow was very boggy. The Wargames Company scenario says that it should only be passable to infantry with artillery and cavalry having to cross at the bridges. I saw no reason to change that.

The top of the map is the South East side where the Prussians and Russians enter. Prussians to the sides and Russians in the middle. There are four villages, from left to right Möckern, Vehilitz, Danningkow and Gommen. Each of these I garrisoned with French troops. The Prussians have to push through these and get at least 3 units down the roads to Magdeburg at the bottom.

The French have most of their troops off table down those roads. 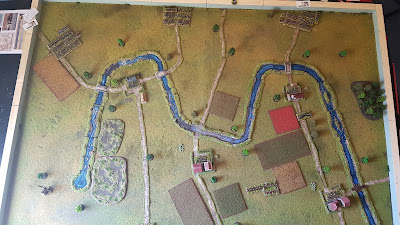 The Wargames Company Scenario had off-table movement for the reinforcements rather than the random roll that Blücher normally uses and I decided to do the same. I split the roads up into 2BW segments off-table and moved the formations down those at the end of the turn. The troops arriving on table as they did so. This worked well.

Anyway, Brendan decided to bypass all the garrisons with one Prussian force pushing down my left flank and the others crossing the river in the middle. This left me with garrisoned troops on their own able to move out of their towns and in the case of the Italians in Möckern attack Brendan's troops in the rear. 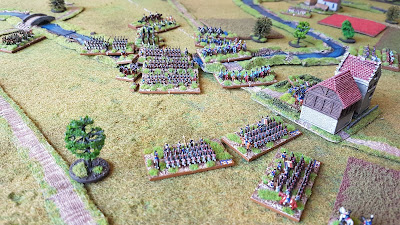 The first half of the game was this movement and the turns went by rapidly, until Brendan got close to the road entrance behind Möckern. At this point he was successfully pushing my Marie-Louise conscripts back each turn. I was taking heavy casualties. 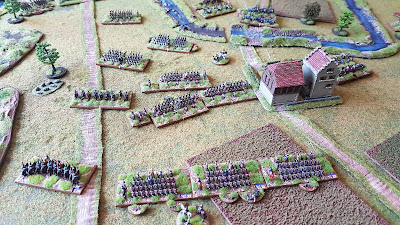 Just as he was about to move the left-hand corps of Prussians off the table though, my main reinforcements arrived to block his route. 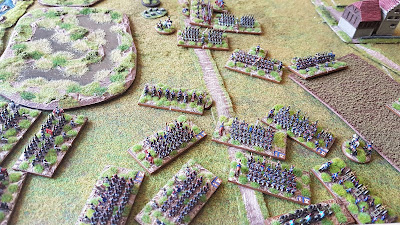 Faced with fresh troops arriving to fight his worn out army it didn't look good for the Prussians, but a few terrible combats later the French had been pushed away from the road. The Prussians saw their chance and in their last turn got the 3 units they needed down the road, right under the French noses.

This was truly a very close and enjoyable game, not at all bad for something I had thrown together based on several different sources.

The next battle in 1813 is Lutzen... I need quite a bit more for that one and quite a bit bigger battlefield as well. It may be a few weeks yet before that happens.