My next army for Blücher is the Prussians, specifically in 1813.

Working from the order of battle for the first battle in Spring 1813, Mockern, I've decided that Yorck's II Corps is a good place to start with Bülow and Borstell being the next ones after.

Yorck's II Corps has 2 infantry brigades and a cavalry and artillery reserve. Unlike brigades in the other armies I've done these are actually far too large to be represented by a single base. In fact they are the size of divisions in other armies. This is the norm for the Prussian army.

The first brigade under Hünerbein is split into three Combined Infantry Regiments, one Combined Hussar Regiment and three artillery batteries. The three infantry regiments are each about the right size for a Blücher unit being 2403 men strong on paper. So that's easy!

The cavalry however is just 801 with only 200 horses being available at the start of 1813. I don't have numbers for later, but I expect until the armistice things didn't get much better. So that unit will have to be represented by the mixed brigade trait being added to one of the infantry regiments, which is suggested in the Blucher rule book. I plan to do this with three cavalry models mounted on a 20mm x 20mm base placed next to one of the infantry regiments. I might even allow the marker to be moved to infantry units within the brigade as would happen with a sub-commander marker in Blücher.

As for artillery, there's enough batteries to make a full massed unit in the Blücher rules or I might base some up for attachment like the cavalry. Whichever way it works out fine.

I'm going to concentrate first on the Infantry. The Late War Prussian lists in Blücher consist of four types of infantry: Guards/Elite, Line, Reserve and Landwehr. I shall ignore the Guards/Elite for now, since there seem to be none in Yorck's Corps and the Landwehr only start to appear after the armistice. The Reserve and Line are more interesting.

What we have at this point is actually Line. The reserve did exist but were mixed in with the Line before the armistice, only being pulled out into their own regiments after that. The Blücher rules differentiate between them only in that the Reserve don't have skirmishers.

With my early armies, French and British, I didn't really put much thought into the arrangement of my units except to remember that British tended to fight in lines 2 deep rather than the 3 of the other armies. The French I organised very much in the way 28mm scale battalions are organised. They had the officer, standard bearer and drummer models, in a group in the centre of the front line. As I looked more into the tactics of the wars I realised this was not right at all. For a start the standard would be protected and the officer would be on the end of the line. Putting all these on the front really wasn't that sensible or realistic.

So when I looked at the Russians I did a bit more investigation and came up with something based very loosely on a battalion organisation. Effectively there were 2 columns 3 deep with 5 men in each row. Five being a convenient number as that's the number of models on a Heroics and Ros strip. Then the mounted officers and standards were in the middle, the foot officer and drummer on the end of one of the lines in one of the column.

This same thing sort of works for Prussians with a couple of changes. I found the Osprey book Prussian Napoleonic Tactics 1792-1815 to be very helpful with this. There's loads of excellent diagrams. Here is a sample of what I've come up with. All the models below are from pack MPN1. 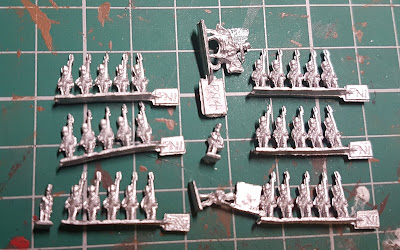 Front of the unit is at the bottom. The standard is at the front in the middle of the two columns with drummer and mounted officer behind, the foot officer is on the end of the front right rank.

The three strips look both like a column and a line 3 deep. Works for me at this scale. Remember these 34 models are representing 2403 men even at 6mm scale! That's 1:70 scale.

This works well for Reserve Infantry. For Line I want to represent the Skirmish trait and to do that I want to have some skirmishers at the front. Conveniently the Prussians sent their 3rd rank forward to use as skirmishers! So I can drop that third rank and have this. 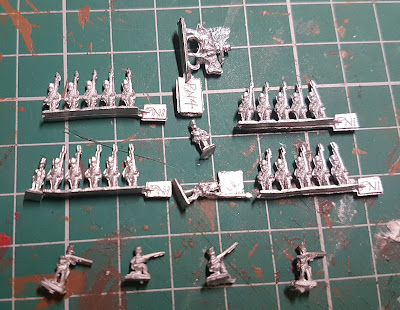 (Edit: When it came to actually putting the models on the base this didn't quite work. There was not enough depth for skirmishers, standard, drummer and mounted officer to line up in column. As a result I've had to put the mounted officer at the side of the rear rank like I've done with French and British. I'm not sure yet whether I will do that or put him in the middle when I do the Reserve Infantry as I think there should be space without the skirmishers present.)

The skirmisher models are from pack MPN2. With the others I'm basically using half an MPN1. One of those has 9 strips of infantry with 2 foot officers, 2 drummers and 1 mounted officer. This is the normal mix in a pack of H&R models. It means one pack will make two of these bases with the addition of a spare mounted officer of which there are plenty in the artillery packs.

So with that decided I can start work!

I will be able to paint all three of those regiments for the brigade in one go. They'll be based temporarily on three 60mm x 30mm bases, one of which will end up being their final base. I've been sticking them to the base with double-sided sticky pads which I found at great value in The Works. Then they get a spray of Halfords grey primer. What I end up with is three of this: 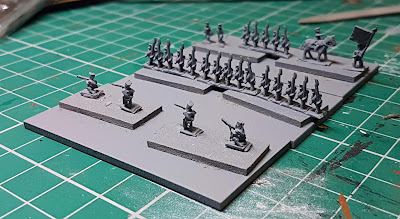 In my next blog post I'll start painting these...