Having prepared the 6mm Heroics and Ros Prussians it's time to start painting.

In the following I'm just going to show a single temporary base from the nine I will actually be painting. These, as I mentioned, will become three regiment bases on 60mm x 30mm MDF bases. Each representing a Combined Infantry Regiment from Hunnerbein's brigade in Yorck's Corps.

When painting these I used a 000 Windsor and Newton Series 7 brush and a head magnifier over my reading glasses. My eyes really are not that great and magnification is key. There's also a very bright LED lamp set to as close to sunlight colour as possible and a home-made wet-palette. Many of the paints used have been chosen because they are just ones I have to hand.

To start with I have applied the coat colour as a base. I've used Vallejo Prussian Blue. Some might say this is too bright for the dark Prussian coats, but with 6mm I've found it pays to paint with bright colours and anyway if you look around in various sources you will find a large range of shades represented. It seemed right to use a colour named after the nation I'm painting an army for. 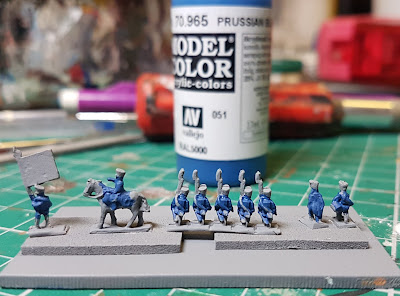 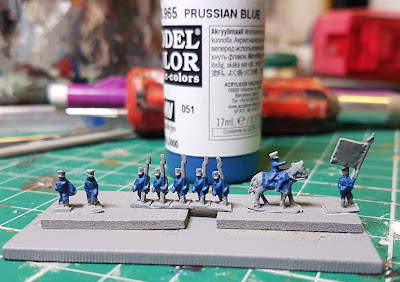 Next I painted the trousers Light Grey. This seems to be the right colour for 1813 from what I can tell. It did occur whilst painting this that it is so close to the primer colour that if I'd taken more care with the Prussian Blue then I'd not have to do this stage. Maybe I'll try that next time! 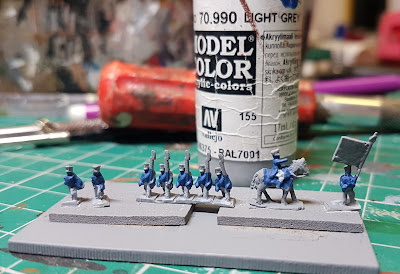 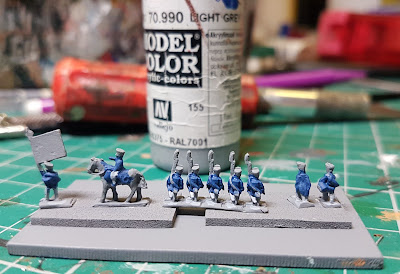 Next is all the Black bits. Shako, which I will be leaving plain black to represent the commonly seen oil-skin cover, boots, bayonet and sword sheath, and ammo pouch. 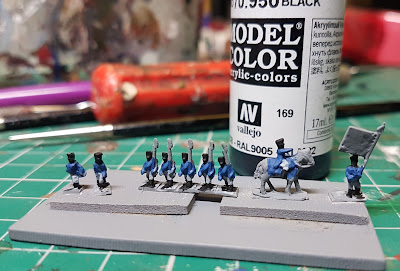 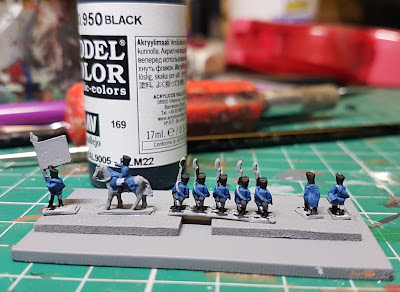 Next will be the cross straps in Off-White. Though actually it's just cross strap, singular as the greatcoat strap covers the other one. I also start the first of several coats of Off-White on the flag since I need a white background for my transparent home-made transfers. 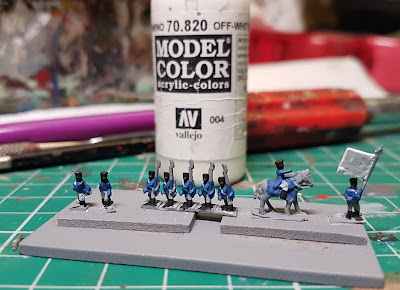 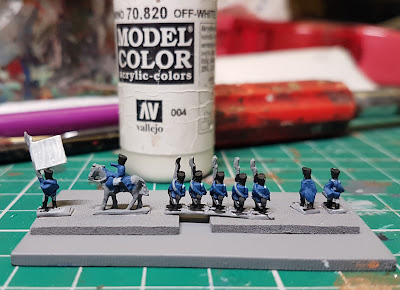 Now the backpack in Cavalry Brown. Just a bit peaks out of the top above the greatcoat roll on the back. 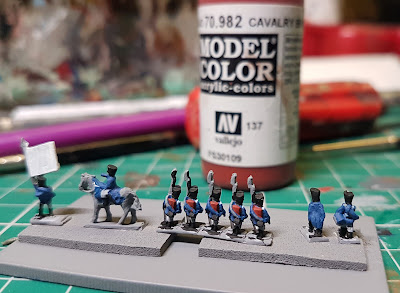 And then the greatcoat roll itself in London Grey. 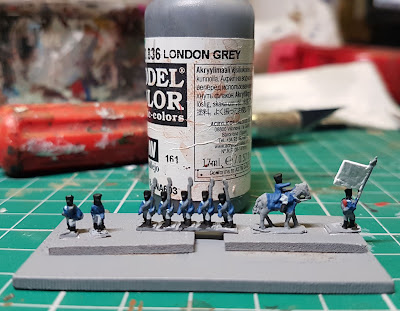 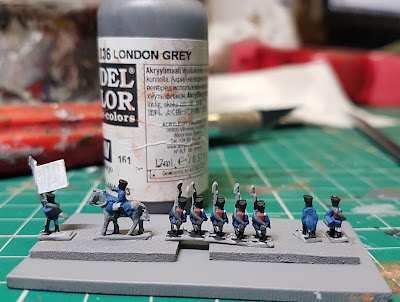 Now it's on to brighter colours. The turnbacks will be red or Vermillion, the 4th East Prussian had light blue shoulder straps and brick-red or dull orange collars and cuffs. I've used Deep Sky Blue and Clear Orange for these.

You'll note I've painted little markings in those colours and marked the base with the infantry regiment number. This helps keep track of it whilst painting all the different units. 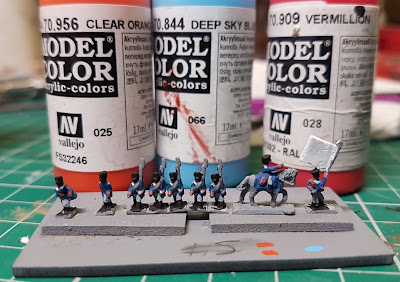 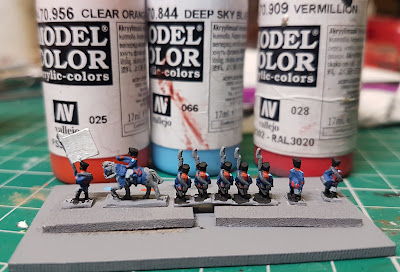 Now the muskets and bayonets. Musket stocks first in Beige Brown, the colour I pretty much always use for wood. Bayonets and Swords in Oily Steel, which is my go-to steel colour. You'll note I actually painted the standard staff white at this point after an extra bit of research. 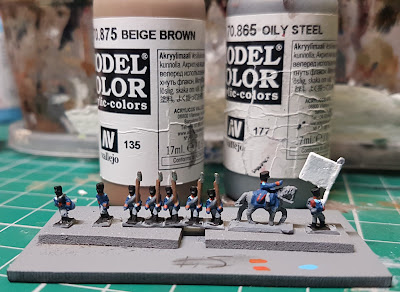 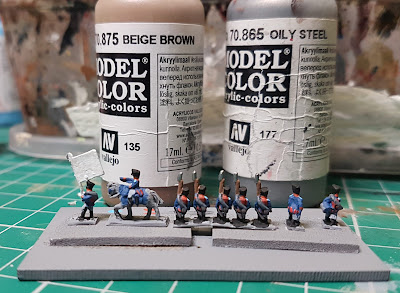 I always used to paint the faces first on 28mm minis, but on 6mm they're right near the end. Hands and faces in Dwarf Flesh as I always feel it looks nicer than the paler alternatives often proposed and various details in Old Gold, finial on the standard, sword hilts, sheath chapes. 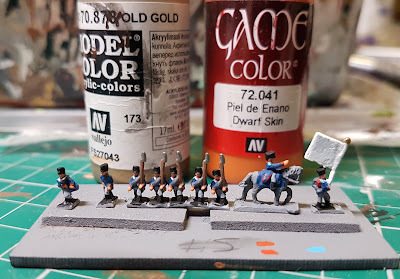 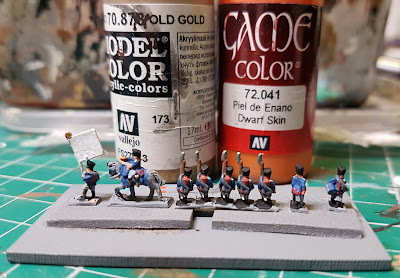 Now its on to fine and miscellaneous details: the horse, drum and anything else I might have missed.

Of note here is the horse blanket for the officer. According to a source I found all Prussian officer's horse blankets were made from black bear skins.

Next the standard transfer is added. This I've made myself with my inkjet printer and the images from www.warflag.com. The transfer is coated with Vallejo Matt Varnish and the edges of the image tidied up with appropriate coloured paint. 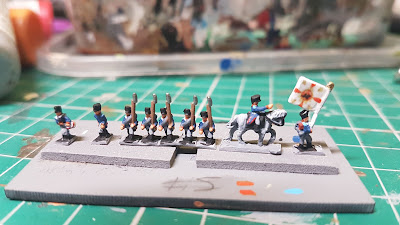 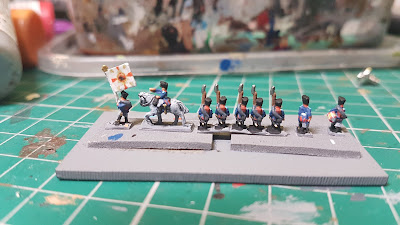 Here's a photo of my complete transfer sheet. I've learned from experience to have plenty of spares, though I didn't need any for this work! 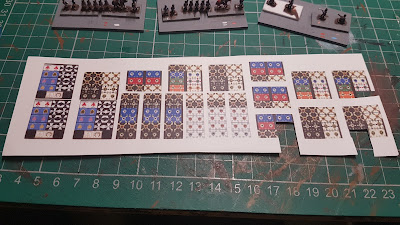 The last thing needed is to paint the bases. This is a colour I use a lot on my terrain. Burnt Umber from Crafter's Choice. It's available from The Works as well as, I assume, other places. 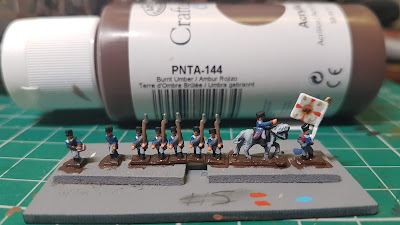 And the whole lot ready for basing, which will be the next blog post. 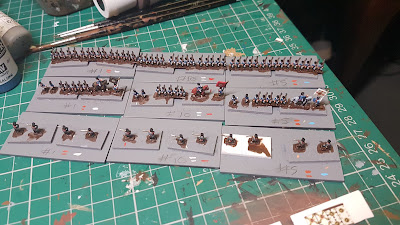