I've decided I will play a bit more Kings of War this year. Last year I decided to wait until 3rd edition came out and so had loads of time for Blücher. Now 3rd edition Kings of War is out I want to get back into that.

There are lots of new units to choose from in the new books. It really is like being a kid in a sweet shop. You want to have a bit of everything. But for once I'm going to concentrate my efforts on just one army and not even a new one for me really.

I've plumped for Sylvan Kin. It provides a theme I really like for my existing Elf army. This army is already well rounded and so I won't be looking to add much to it. I want to make use of what I already have in new ways. I don't really need new Kings of War models as I do have a heck of a lot stuff already!

So, I took Sylvan Kin to the Wild Charge tournament last weekend. In the games I didn't do that great, 2 losses and 2 wins. But I did get Judge's Choice for Best Painted. Which is great!

Discussing with other players the special Treeherder upgrade, "The Wiltfather" kept on coming up as a recommendation. This is a particularly sad/angry Treeherder who brings death to those that deserve it. Also in the rules it gives the Elite rule to all friendly Verdant units within 6", which sounds well worth it! I'll try it out for the first time on Monday night.

So I've spent a little bit of time modifying one of my existing Treeherder models to fit. The new paint-job is inspired by the Weirwood trees from Game of Thrones. It was suggested to me to add skulls to the branches, but instead I've gone with a Warlord Games Skeleton that the Wiltfather is looking sadly at. Has he just killed it? Why is it black? Has he burned it? Was it undead or alive before he got it? There's a story there... 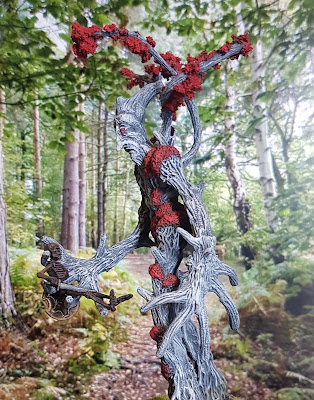 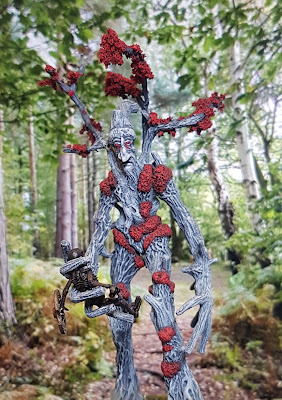 I also added a few more old GW Dryads to my unit of Hunters of the Wild to make them up to a regiment. 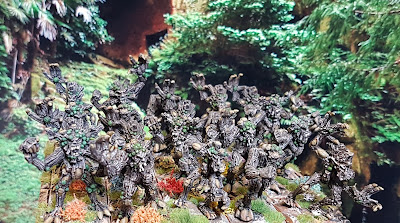