I've been eyeing up the Blotz 20mm scale Petrol Station and Diner for use with Gaslands for the last few weeks. Then whilst browsing the Sgts Mess stall at Hammerhead yesterday I found it and so I had to buy it.

With another Gaslands game looming tomorrow night I thought it would be nice to get it ready for then, so having a free day today I set to it. I've painted the diner to be extremely shiny as many US diners are and it is named after my son. As such it only serves his favourite foods. There's definitely no Chicken available. The petrol station has become a gas station owner by international oil conglomerate "Yith Gas".

Overall I'm rather happy with this MDF kit. There are some great details like the moving doors. I'm looking forward to it being used in game. I may come back later and glass to the windows when I've got time.

Also for tomorrow night I've been busy making Gun Turrets for the Arena of Death scenario. 2d6 of these are needed in the game, so I thought I better make sure I had enough. Finding a way of making 12 inexpensive gun turrets is quite a task, but I think I've managed it. These cost me nothing at all.

The main bodies of the turrets are spent 9mm pistol shell casings (completely inert!!), that I was given several years ago. These were drilled and the tubes from watch strap spring bars were put in for barrels. With the addition of some filler to hide the tops of the bullets, small MDF bases and the addition of paint and some 40K decals they're done. 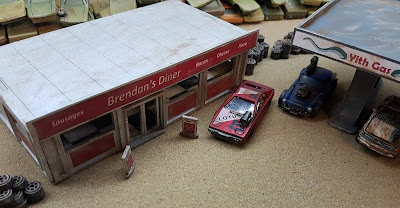 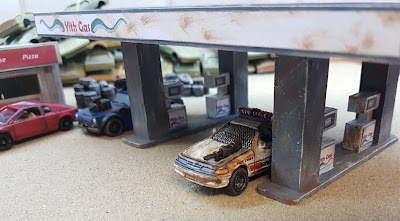 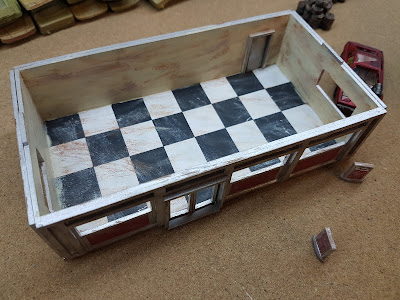 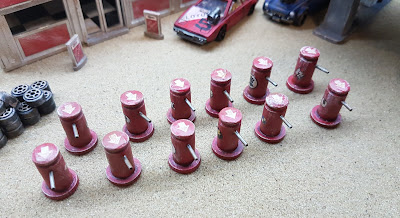 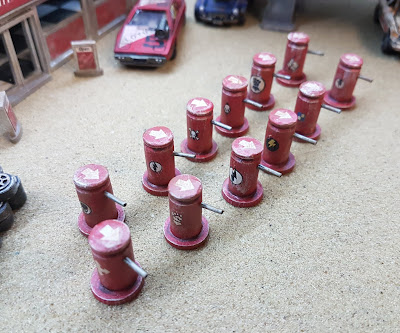