Since the last blog post I've been very busy finishing off the buildings for the Frostgrave game.

That game took place today. A three player affair with my Summoner Warband against Ed and Henry's, both with Elementalists as their wizards. We used the basic scenario. 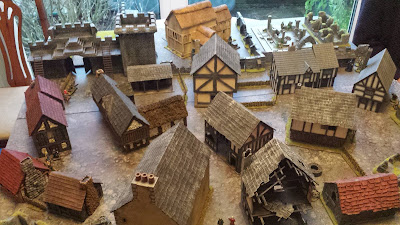 My wizard and apprentice spent most of the first part of the game failing to cast spells. I also was getting beaten by Henry who was stuck between me and Ed. Whilst Ed's wizard was off in some ruins retrieving a chest his soldiers fought and beat Henry's wizard. 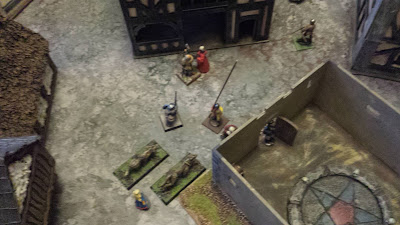 Then a wraith appeared on Henry's board edge. With this being our first game nobody had any magical weapons and so the wraith was immune to all our attacks. Henry's apprentice fell to it along with all but his thief who sneaked off with some treasure. Then the wraith saw my wounded knight and headed for it. The knight drew the wraith off in an attempt to allow my apprentice to escape, but she was caught as well. With a lucky blow she pushed the wraith away and managed to escape around the corner of a building. 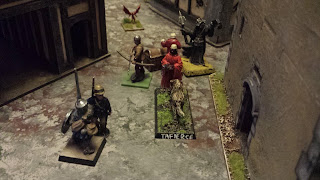 Meanwhile my wizard was tracking down Ed's wizard and knight. They were just about to leave the table when he finally managed to cast a spell, Wall, right in their path! Ed was not happy at all. My demonically possessed treasure hunter took down his wizard, but the knight escaped with treasure over the wall.

In the end I managed to get 4 treasures off the board; Ed got 2 and Henry got 1. We all suffered a lot of casualties but in the after game phase all characters survived without serious injury (except one of my dogs) Though Ed's wizard required some treatment to make him better.

All-in-all we thoroughly enjoyed the game and have all advanced our warbands ready for a future encounter.