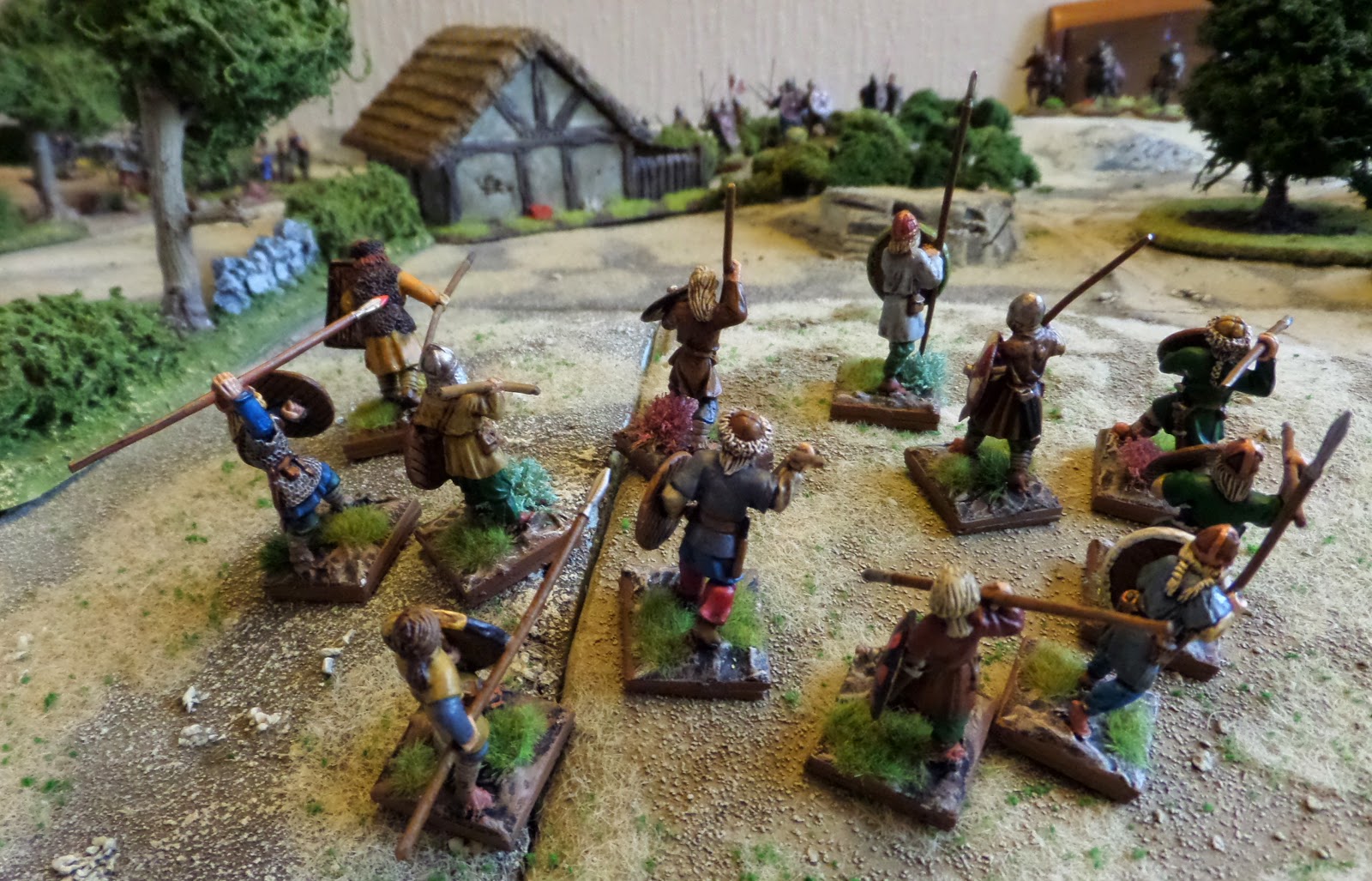 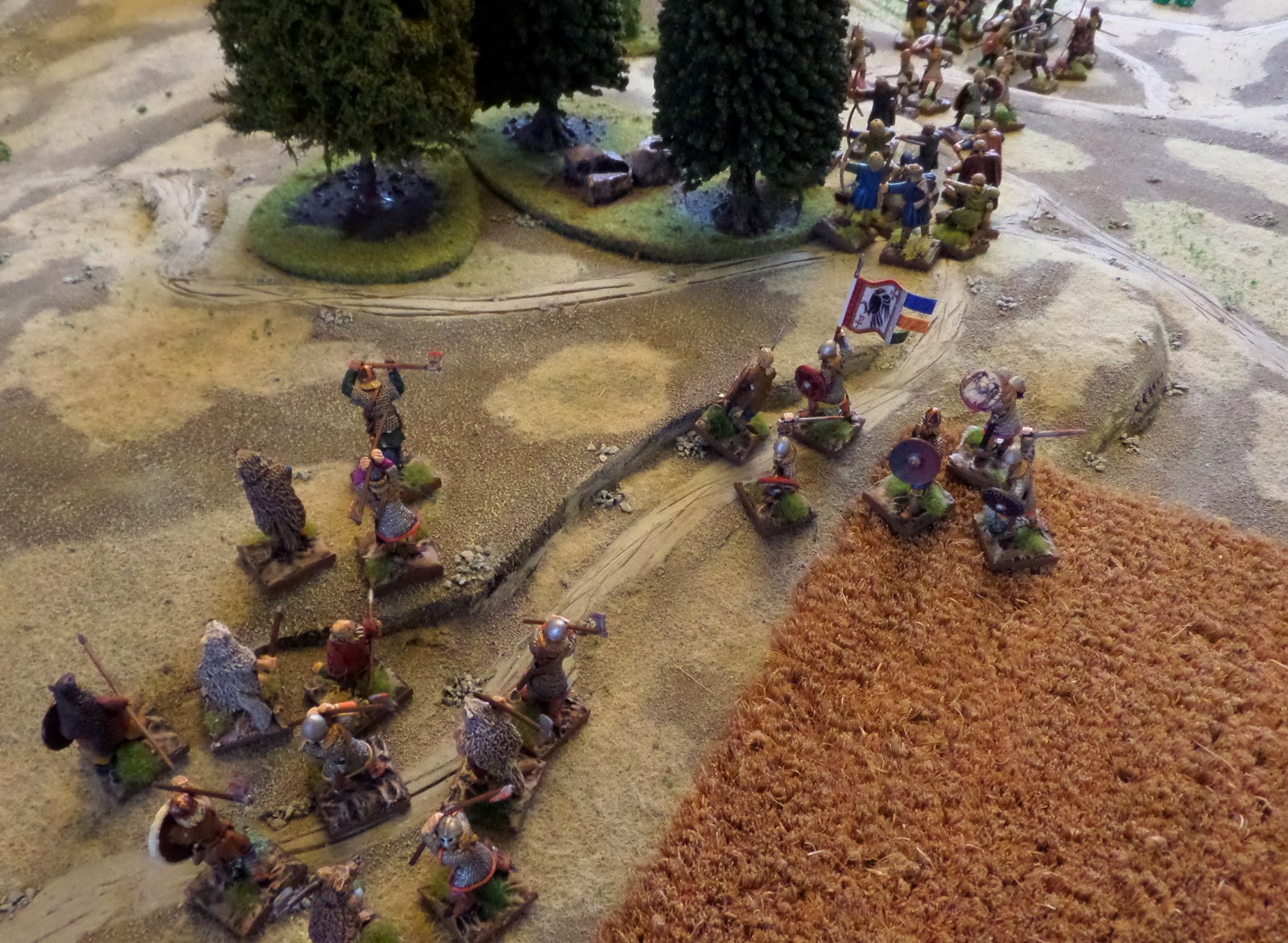 The game started well with slow movement on both sides, though I managed to get my Vikings to move a bit further than Craig managed to get the Normans to advance. I had my troops positioned around a wood with my Foot Serjeants off to one side in the open. They formed a Schiltron at the top of a hill just out of charge range of the Normans. 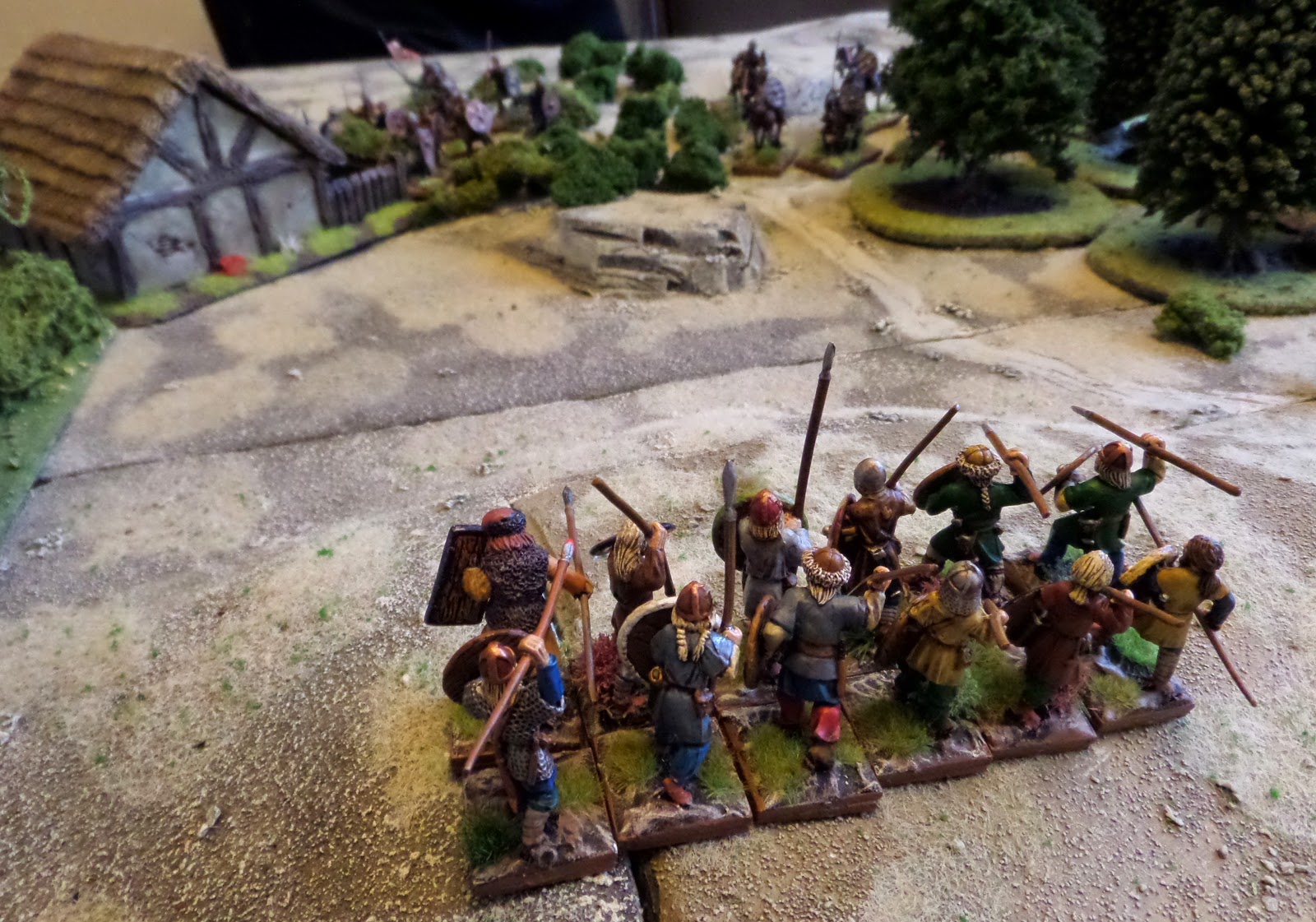 On the other flank my Fierce  Foot advanced on Craig's Foot Serjeants, but they managed to form a Schiltron behind a brick wall, so increasing their armour two levels. However being rather impetuous, but Fierce Foot charged them anyway, repeatedly causing minimal casualties whilst losing significant numbers themselves until the remainder routed off the table. 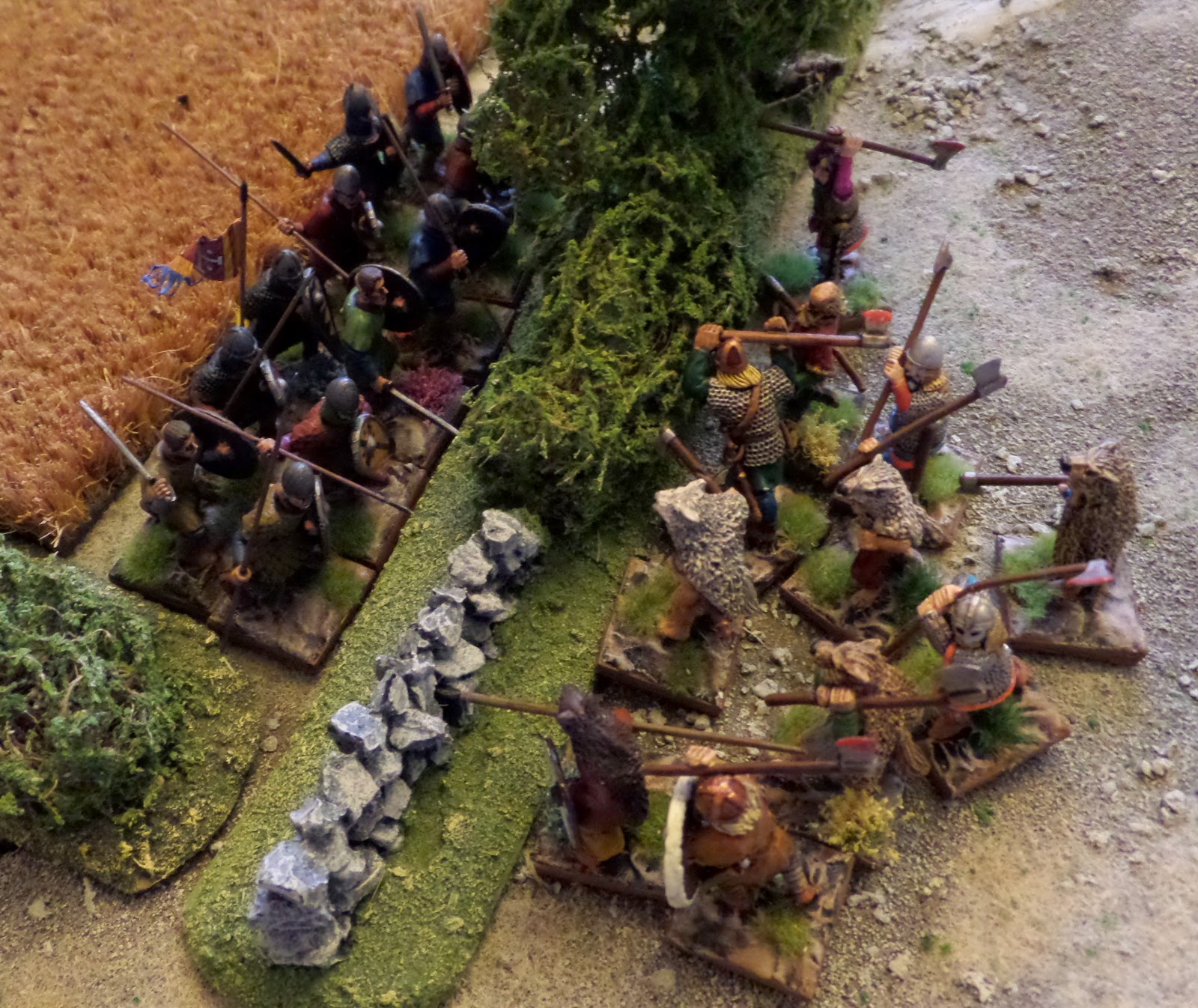 In the centre Craig's Mounted Men-at-Arms advanced into charge range of one of my Foot Men-at-Arms units, hoping they'd be able to counted charge. But at that moment I declared a challenge between my leader and his (so gaining 1 glory from a boast I'd made at the start of the game). Not wanting to risk losing his leader in the ensuing duel, Craig declined and had to make courage rolls for all his troops. To his dismay his Mounted Men-at-Arms became Battered and would be completely unable to countercharge. So I charged them, but unfortunately we only caused a single casualty each.

The battle in the centre raged on, both the Mounted and Foot Men-at-Arms causing similar casualties to each other, until there was just one of each left. It came down to my Archers to kill his leader with a lucky bow-shot. 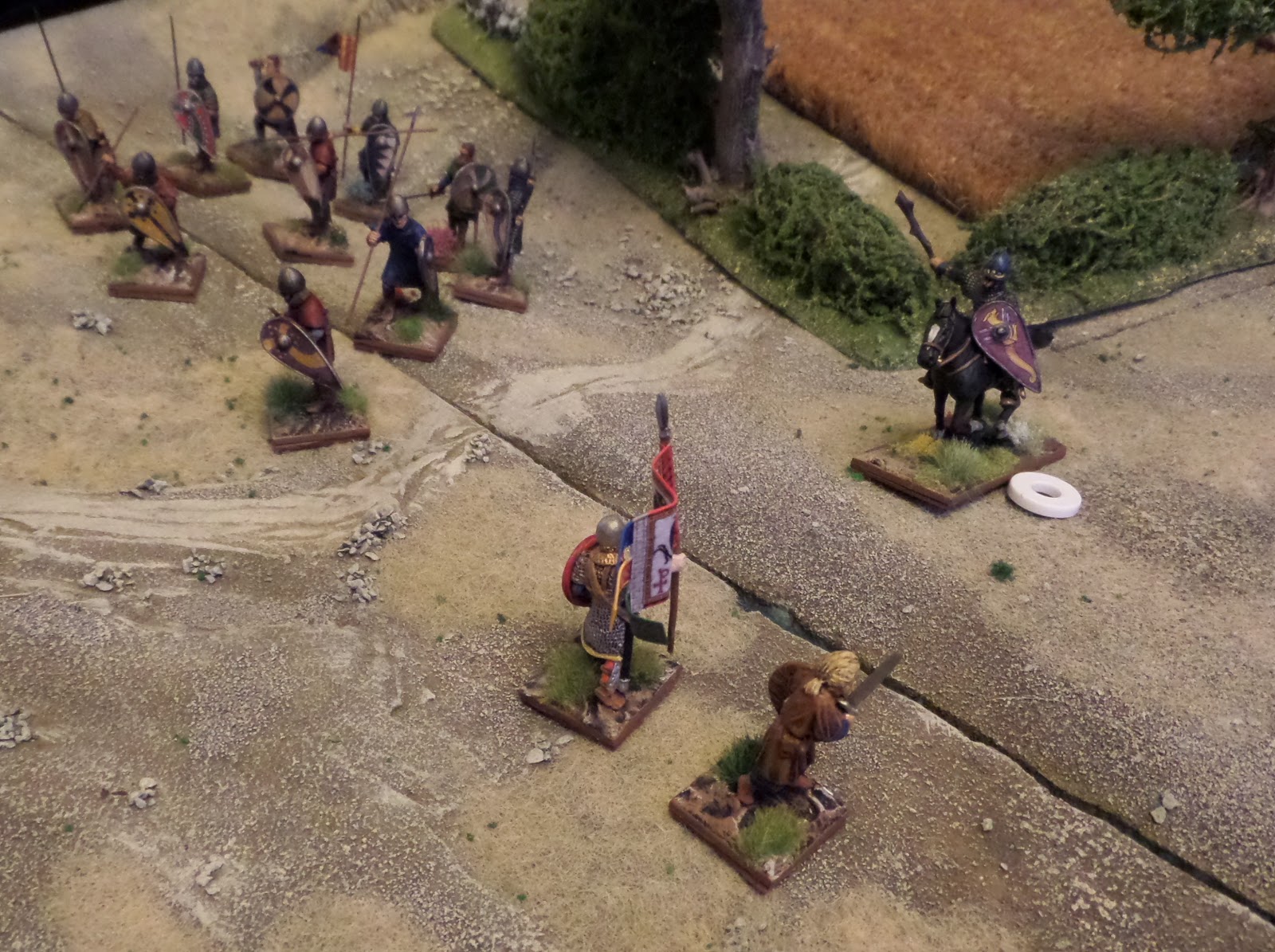 On the other side of the hedge my other Foot Men-at-Arms tentatively approached the Norman Foot Serjeants who had become bogged down in some rough going, unwilling to leave it for fear of being charged by a superior unit. The I re-read the Ferocious rule and realised my Foot Men-at-Arms would not be inconvenienced by the rough going when they attacked. So in they went. Two turns later the Norman Foot Serjeants were wiped out.

Then Craig realised that my victorious Foot Men-at-Arms had advanced within charge range of his other Mounted Men-at-Arms unit. They would have to test to see if they did a Wild Charge against them. They did and in they went. They were severely hindered by the rough going and cut down fairly decisively by my Foot Men-at-Arms.

This left Craig's retinue under half strength and a failed courage check routed the other unit of Foor Serjeants. This just left the Archers but with the number of units now at 5 the game ended before anyone could contact them.

In conclusion we enjoyed the game. I particularly liked the way the Schiltrons worked and the way the Ferocious Foot became uncontrollable bashing themselves to death against it. We did however find some balance issues. Craig desperately wanted to dismount his Mounted Men-at-Arms and the Foot Men-at-Arms just seemed massively superior for the same points. The Ferocious rule making a huge difference to the game and not seeming that realistic as heavily armoured troops should have been disadvantaged in the rough going, think of Agincourt...

We came to the conclusion that we must have had too much terrain on the small table. Also maybe the Foot Men-at-Arms could do with some tweaking, either losing Ferocious or having their 3+ Attack Value changed to 4+.