The second battle of our campaign was to be played at a normal club-night at COGS so we had to choose a smaller one.

The battle was for the key town of Altenburg, to the south of the map. This town blocks the road that the French are using to advance further into Prussia and also split the French forces and so is doubly important. 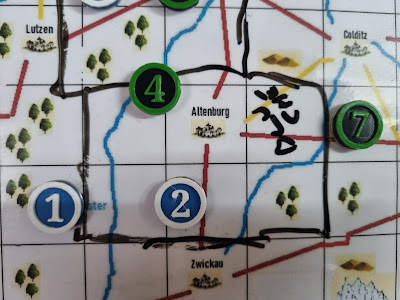 Blücher held the town with half of his corps. Barclay de Tolly's corps was just off the map and would come on as reinforcements. Marmont lead the French IV corps in the assault and was hoping for support from XII Corps just off to the west. 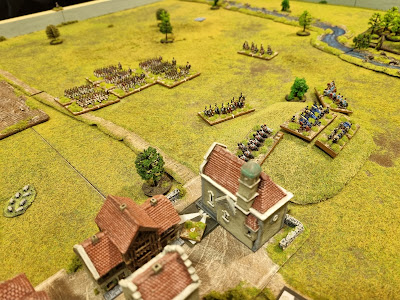 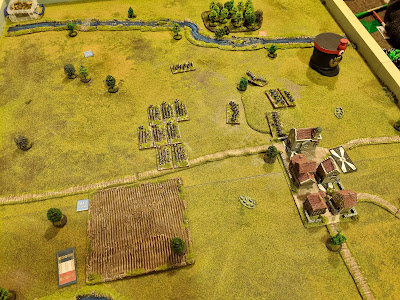 Blücher garrisoned the town with infantry, including a guard unit and put his horse artillery on the hill with cavalry behind to defend. As the French columns advanced he bombarded them and swept some cavalry around to the right flank. This served both to threaten the French columns, slowing them, but also to head-off the reinforcements.
The French columns pushed some of the infantry out of the town, but the guard held strong. The cavalry danced around, jockeying for position on the right flank. Things were not looking too good.
Then the Russians arrived and their columns of infantry counterattacked into the town, pushing the French troops out and destroying some units completely. 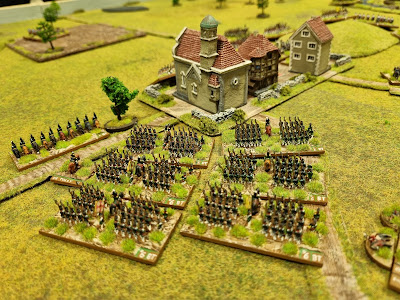 However it wasn't long before the French reinforcements arrived, but with the Prussian cavalry watching their deployment onto the battlefield they were unable to reserve move enough to really take part in the battle. 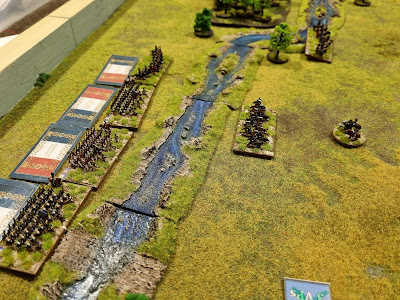 As the sun set the French decided that their attack on the town was only going to reduce their strength for further battles and so they called off the assault. The Allies held the town for very minor losses and they'd given the French a bloody nose in the process. 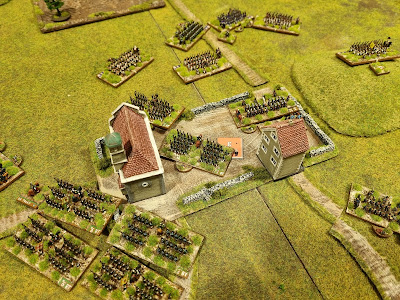 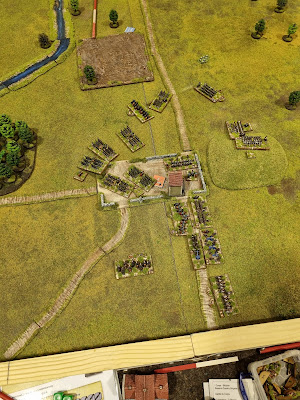 Playing this sort of campaign battle is a completely different experience from playing a one-off game of Blücher. You have to be careful not to over-commit your units and end up with a much reduced force for future battles. It's very easy indeed to do this. The French lost units they could really have done with not losing in this battle. I suspect this may affect them badly in future campaign turns.
There are two more battles to play out in this campaign turn. One looks like we should be able to get it done in a COGS evening, but the other is going to require more time and it could be a while before we get chance to play it.