Blücher - Another game of Scharnhost

After the last game of Scharnhorst taking a little over 4 hours, I thought it best to split the game I had planned with Gerald up into two stages.

Last Wednesday at COGS we did the prep. Built the armies and columns and played the Scharnhorst part of the battle. This left me with a reasonably good position I thought with more on the table than Gerald, and threatening him with a pincer movement with my reinforcements.

This is how it was at the end of play on Wednesday. The battle inside the black lines with Columns 1, 2, B & C on the table. I was French (blue), Gerald British (red). 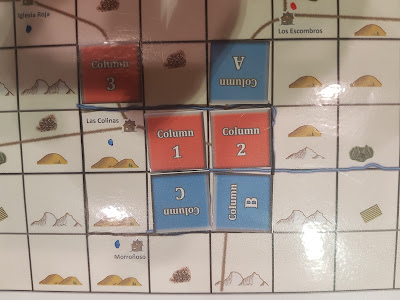 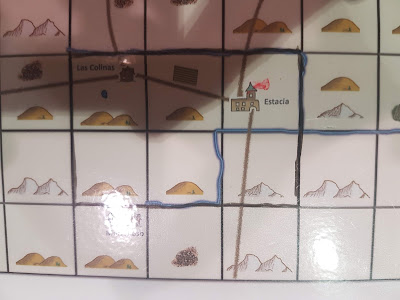 We packed the cards into zip-lok bags and met again tonight at the club.

I got in early and started the terrain set-up. Once we'd done the board looked like this.. 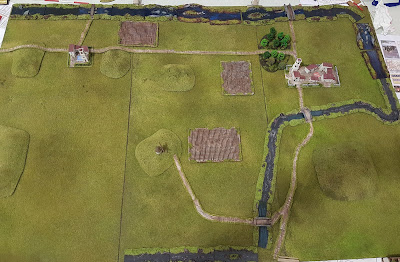 We then deployed, no photo, and found we both needed to break 3 of the opposing units at game start. Gerald also realised that if he could take the village, which would be easy considering my reserves were coming on near it, then he didn't need to keep the town to win. So he decided to move all his troops over to the North-West of the board. I had to break him really so started an attack.

The area to the South-West became a swirling melee of cavalry, and the ploughed fields slowed my advance. I soon had the town as he had left only a sacrificial Portuguese Cavalry unit defending it. The rest of his units managing to escape me. 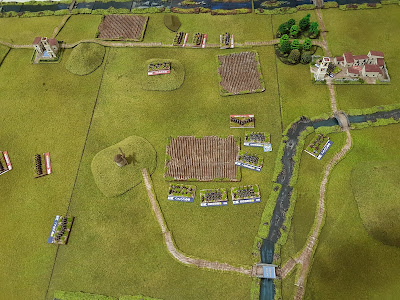 The reserves took forever to arrive. His arrived at around turn 16 (I think) and mine the next turn. Because I'd taken the town I was able to use reserve moves and soon I was pushing hard onto to the village, but Gerald had quite a defence in place. I needed to break a few more units yet, but I didn't think I had enough time as the turns ticked away... 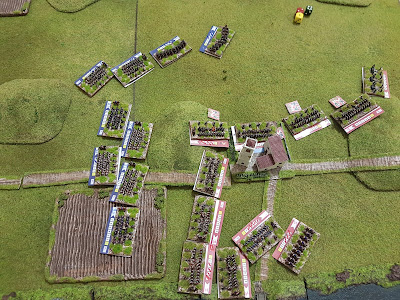 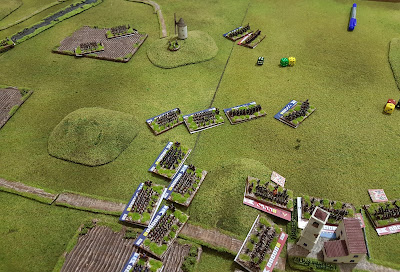 For the first time the game went the full 30 turns with Gerald winning by one victory point. We both agreed that this was probably one of the most interesting ways to play a wargame we'd ever tried. We'll be doing it again for sure.