So the second game of Blücher in two days and my 3rd game in total. This time against Gerald and using the pick-up game scenario and 200 points.

I was French and on the attack again, Gerald's British lined up along a row of Spanish hills. There was a river on my right flank and I soon realised since there was no bridge across it in my deployment zone and that I'd have to assault on my left flank. So I deployed everything on that side of the river. I also then realised that there was rather a lot of difficult terrain on that flank as well!

Gerald saw what I was up to and deployed his reserves immediately to cut off an attempted cavalry assault on that flank. He then spotted a chance to get on my right flank with a reserve move and brought up a corps there.

My assault on his flank struggled and after a lot of effort he pushed it back. On the other flank his flanking corps marched forwards into a hail of artillery fire and repeated cavalry assaults. He struggled and it faltered. I was safe there.

Meanwhile the rest of my force was pushed back onto the windmill hill by his counter-assaulting army. My attack had turned into a retreat!

As we ran out of time Gerald put one last assault in to break my army. However he committed too much and I managed to get a few kills myself as well!

We had both been pushed over our break-points, but checking the rules only the active player's break point mattered for victory, so I won! Gerald won't make that mistake again.

A wonderful game again. This time getting my new Spanish buildings on the table. The windmill is from Leven Miniatures and the rest are a 3d-printed set from eBay (an absolute bargain).

We have another game booked next week. We're going to use 200 points again and this time use Wellington and Napoleon as our commanders. 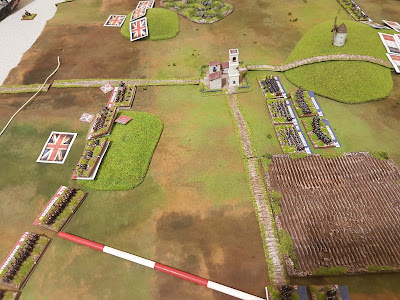 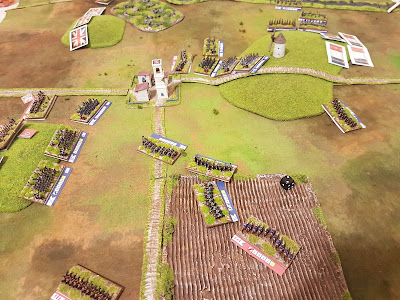 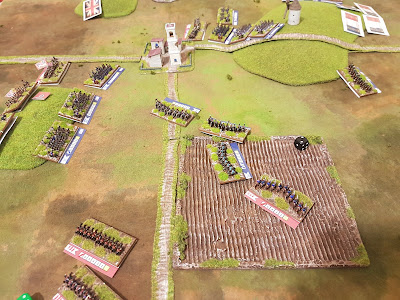 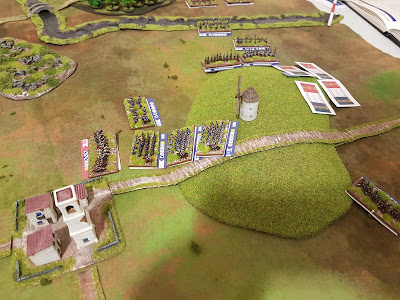 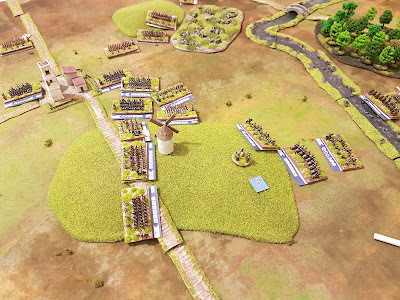