Terra-Formers Skirmish Board - In Progress

When Kings of War Vanguard came along I realised a problem, it a requires 3ft x 3ft square board. All my terrain tiles (apart from my medieval city boards are in 2ft x 2ft pieces. If I was going to make a non-city board for the game I'd have to do something new.

I considered making a single 3ft x 3ft board, but decided it would be a bit big for the car. I wanted something with some three-dimensional aspects anyway. I had noticed the Sally 4th Terra-formers system a while ago and had been impressed. The laser-cut accuracy and use of real earth magnets was something I'd noticed in a US based product years ago, but this UK based product would be even better for what I needed.

I decided to order the "Contested Crossing" starter set for Christmas with the intention of having it ready for the Vanguard participation games we'll be running at Hammerhead and Chilcon this year. Then comes along my sudden interest in Napoleonic Skirmish games in the form of Songs of Drums and Shakos and I have yet another reason to have this board.

Well with the 6mm Napoleonics stalled for the moment awaiting an order and needing to get these boards done soon, I thought I better get on with them!

I've built them up and cut and glued the polystyrene. Next step will be to hit the polystyrene with a heat gun to apply some interesting undulations and then it's on to filler... 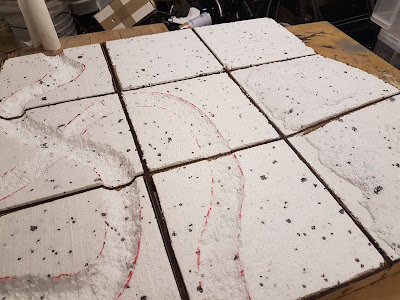 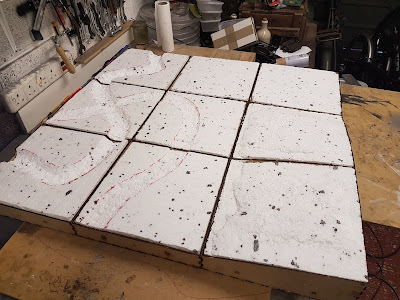