We usually only get to play Frostgrave on club nights, where we have just 3 hours to play. The other time we play at shows and there we're really wanting to get members of the public to get some play in rather than ourselves. Neither allows us to play a really big game. So when Tim at Mountain Gremlin Games offered space in his shop for a day it seemed the perfect chance to get a big game of Frostgrave under our belts. 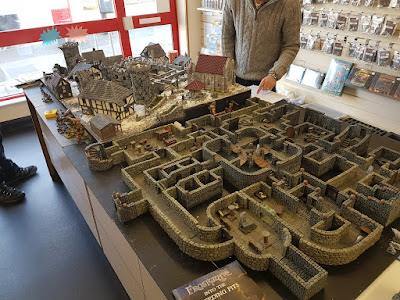 The Walenton Manor scenario in Arcane Locations had piqued my interest as it used a dual table set up. Two floors of a manor with moving staircases. Well I wasn't about to make the terrain for a manor, but I could see that a similar scenario would work with my city and dungeon. Initially I had planned to make staircases and trapdoors as suggested in the original scenario, but I could see those taking up too much space in the dungeon so decided instead to make a set of Portal Stones out of some spare castings I had in my Hirst Arts bits boxes. These I made into pairs with coloured runes engraved in them. 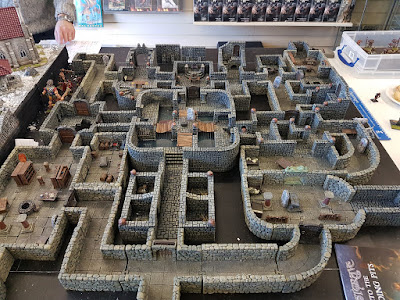 We used the same rules for placing and moving the portals as in the Manor, but allowed them to be placed on levels above the ground on the city board. We decided it would take an action for a model touching a portal to move to the other paired portal. The action would count as a move and so it would be possible to teleport and the cast a spell. We also decided that the dungeon really needed to have the Minotaur in it at the start and gave an additional 50xp to the player that killed it. 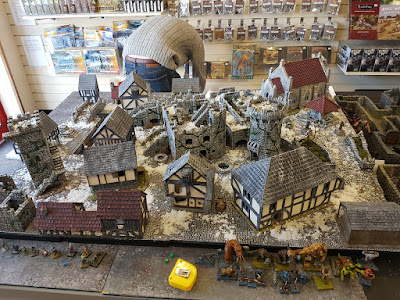 There were four of us playing and we used our usual warbands, there's quite a bit of disparity in power in our group with 30 levels between some of the warbands so we teamed up with weakest and strongest versus the middle two. My Ekementalist and Andy's Summonder versus Steve's Witch and Jeff's Thaumaturge. 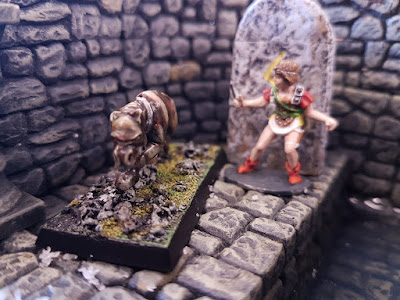 Things started well and it wasn't long before we had models in the dungeon trying to get their hands on treasure. The mobile nature of the portals made for lots of tactical movement and Steve and Jeff soon found themselves without ways to get out of the dungeon. However myself and Andy found ourselves outnumbered and started losing members of our warband fairly rapidly. 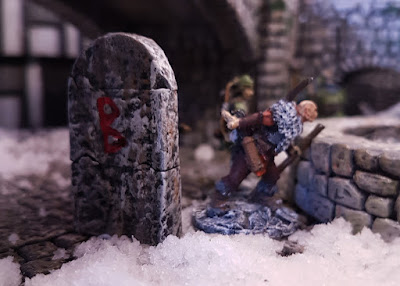 Treasures would be extracted from the dungeon by one player, only to have another kill the model carrying it and then sneak it off the table. At one point my captain had a sneaky little imp carrying one and would have been able to catch him until a portal appeared between him and his goal and about 4 of Steve's Skaven burst out in front of him. The best he could do was to run away. 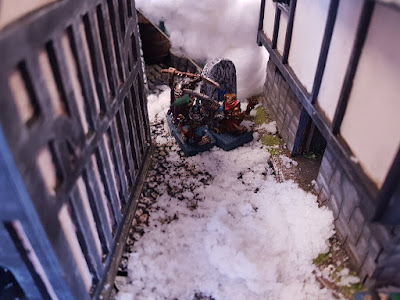 Towards the end of the game all me and Andy had left was our Wizards whilst Steve and Jeff had the large majority of their warbands. We stood at the top of the tower and tried to elemental bolt the enemy below as they ran off with the treasure, but it wasn't to be as Steve and Jeff's wizards and apprentices blasted us with Strike Dead and Push. In the end we only got three treasures off the table to Steve and Jeff's ten. 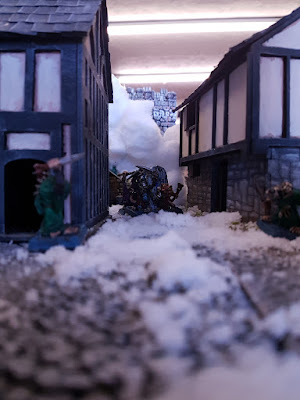 We all had had a blast. This was by far the best and most epic game of Frostgrave we've ever had. 6 hours of play time in total. Brilliant, we will have to do something similar again, but what can we follow that with! 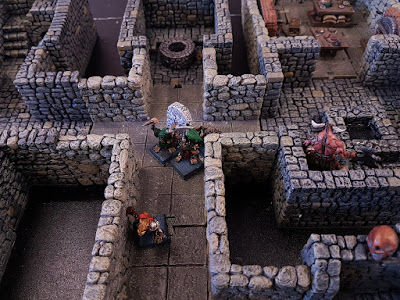 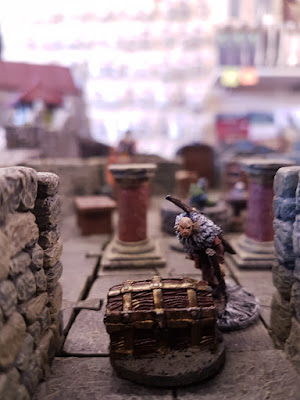 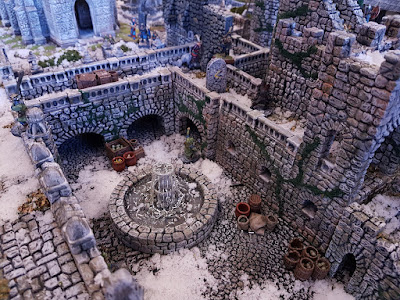 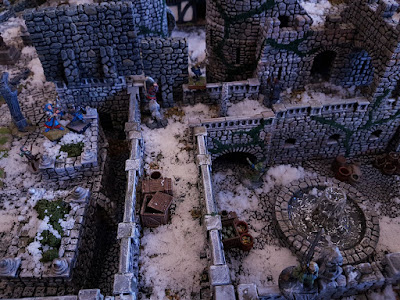 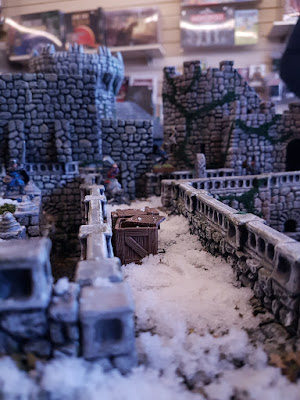 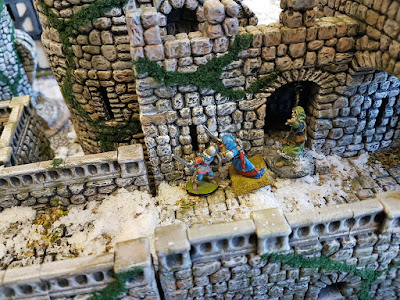 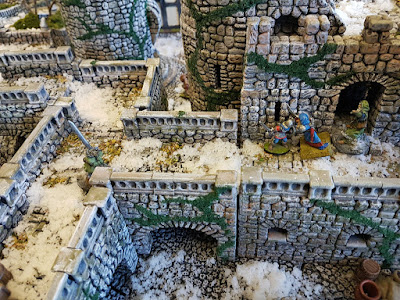 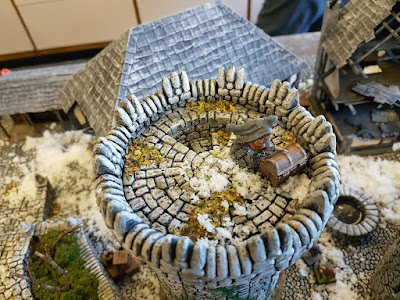 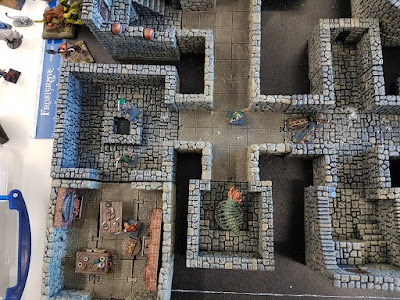 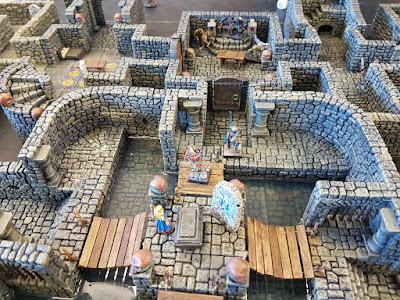 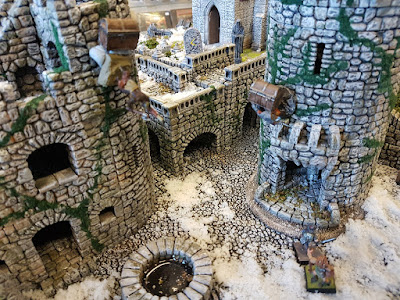 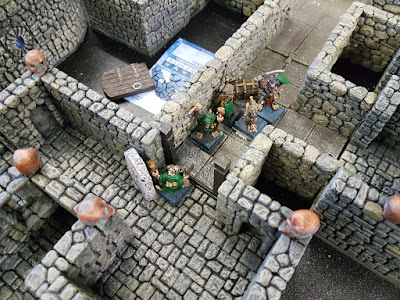 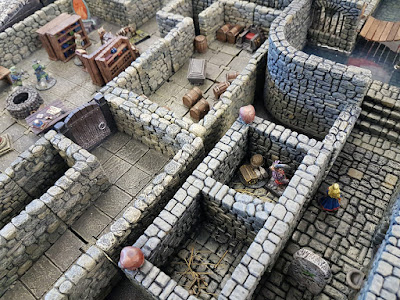