When I first started 3D printing I looked around at what was available to print. There's quite a lot out there and a lot of it is free. However some of the better bits are paid for items and I was drawn to the collection of models on Printable Scenery. I've been slowly building items from their OpenLock collection, including the tower I completed a couple of months ago, which is the start of a much larger castle project.  However there's a lot on the site that is not OpenLock.

Having quite an extensive Mantic Elf army I was drawn to their Elven terrain collection and decided that I had to print at least one of the items from that. Thinking this may be the only item I'd print from that I decided I might as well go big and choose the largest building, the Tower Aeturnus.

I bought the STL files for this back in late June and have been printing it since then. It's a big model with a lot of detail and I've had a lot of stress getting it finished. I had initial success and then for a while my printer was failing to print any of it. This was due to me installing a very poor steel nozzle, which I replaced in mid august and since then I've been able to print things properly again. I managed to finish printing the model a couple of weeks ago.

I've just finished it off and now it's time for a few photos! 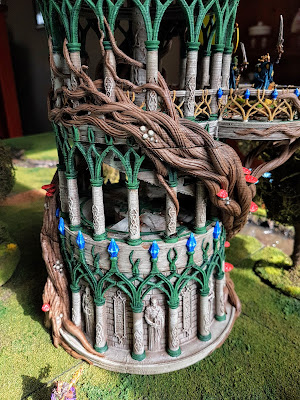 Looking at how well this has come out I may have to do something else from the range... though at some point I have to print some of their historic ships!

Email ThisBlogThis!Share to TwitterShare to FacebookShare to Pinterest
Labels: 3D Printing, Elves, Kings of War, Kings of War:Vanguard, Lord of the Rings, Terrain