Today we were at Dales Wargames. As I've been doing for the last few of the Dales games days I brought along my Blücher game to play. We get all day to play so it's chance to try something quite a bit bigger than we get at COGS. With that in mind and with my Russian and French forces pretty well fleshed out I thought a big game involving everything I have for both of those would be fun.

When scenario came to mind I figured that since they're for the 1812 campaign primarily perhaps something based around Borodino. A mini-Borodino perhaps. It turns out though after working out what I have it wasn't that far off what would have been needed for a full scale Borodino.


The terrain was based on the numerous maps of the battlefield that are online. The Great Redoubt or Rajevsky Battery was to be in the centre of the battlefield with the river in front and beyond that the little town of Borodino itself. Two roads ran towards Moscow behind the Russian lines and the Russians would have to ensure that the French did not gain control of either of these.

Deployment was done with each side being controlled by two players using the Blücher  multi-player rules and splitting the forces into two flanks. Each player effectively having 3 MO dice for command.

On the French left flank Eugene had an open field to advance across for his Italians. Ney just to the left of the river would have to advance up the road. Davout and Poniatowski on the right flank had a couple of wooded areas to make their way through. The Imperial Guard and reserve cavalry hoped they would not be needed and sat just to the right of the river.

As soon as the French troops advanced into range the masses of Russian artillery revealed themselves and started bombardments... 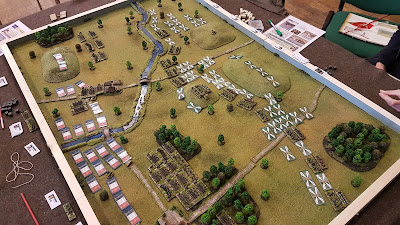 The French took heavy casualties from the initial barrage, but they responded with counter-battery fire forcing many of the Russian batteries to leave the field of battle. This was a key moment and would make the invader's job a lot easier in future turns.

The battle progressed as Davout's advance was slowed by the wood. Eugene had to deal with several counter-attacks and a sneaky attack by Cossacks aroung the flank onto his artillery.

Eventually Davout broke through the wood and was able to attack the Great Redout. An initial attack was repelled, but the second was successful and the fortifications were taken. But then history repeated itself and the French were pushed by out by Russian Grenadiers.


The French assualt continued, most success was on the French right flank, on the old road, where there was mostly just Militia present. But then once through the weak outer layer it became apparent they were hiding a huge number of Russian Grenadiers. Davout started to struggle and the Corsican Ogre decided it was time to release his Guard. These would provide the extra punch needed to push the Russians off the old road...

The Guard did indeed push the Russians back and many brigades of Russian line infantry were seen fleeing from their charges. One of the two Russian cuirassier divisions were re-assigned back to defending the road, but would it be too late...

We'll never know... we ran out of time! We got turn 19 finished and could have played on for another 11 turns to determine victory. It was looking very good for the French though, they had inflicted almost 3 times as many casualties as they'd taken and had nearly cleared the right-most road.

A fantastic game and so good to see all my troops in play. Just a single brigade of Young Guard didn't make it onto the table, having been left behind when the rest of the Guard Corps moved up to assist Davout. Wonderful to have such great players in Dave, who also organises Dales, Andy, who is always an enthusiastic player to have around and of course my son, Brendan, who I am very glad loves playing the same games his dad does.