Sunday afternoon meant a game against my friend Ed. We'd had a Lion Rampant game planned for some time and I'd built up new models for my Wars of the Roses army and the medieval wagons I posted earlier so we could play the convoy mission.

However Ed brought his son, Henry, along as well and so a slight change of plan was needed. After a quick google I found that others had had some success with three player Lion Rampant. The modification needed was to sort out the turn sequence. It seemed popular to use playing cards to designate each player's turn. One for each player drawn randomly to designate the turn order then reshuffled and repeated.

The scenario would require a little more work as I still wanted to use the wagons. In the end each wagon was assigned to a player and the players had to get as many wagons as they could off the opposing side of the table from their starting position.

I also decided to put quite a few more buildings in than I normally see in a game of Lion Rampant. I have quite a collection now since I've been building up my Frostgrave city board and I fancied seeing how the game worked through more built-up terrain. We ruled that no models could go inside buildings.

Ed used his own force of Fireforge medievals whereas myself and Henry used my Perry Wars of the Roses. I picked Lord Fauconberg's retinue and that left Henry with Edward IV. I just had enough models to do 24 points of each, though Henry had no fast moving troops.

It looked like Ed would have the easiest job as he had the shortest route since he started on one of the long edges. But it was not to be. He found himself sandwiched between mine and Henry's troops and all but wiped out before I found a way around the back of Henry's forces. Unfortunately for Henry his slow army and having to move through the town meant he didn't get very far.

Eventually Henry's forces were wiped out and I captured his wagon. We ran out of time and had to rule that myself and Ed would have got the wagons we held off the table without further combat. This meant I had 4 glory from those and Ed had 2. In the end after boasts were taken into account that left myself on positive points, Ed on zero and Henry unfortunately on negative points.

We all agreed that the game had been great fun with some especially tense moments as troops fought amongst the town. 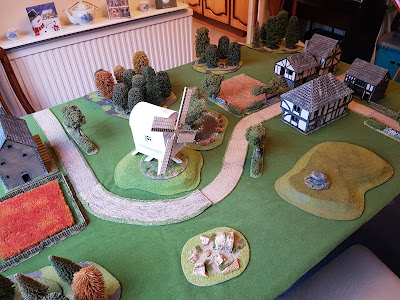 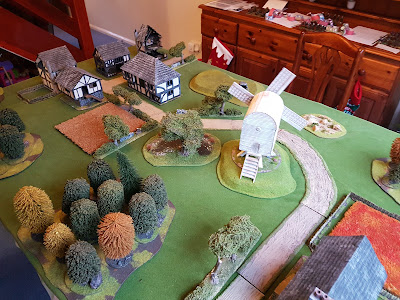 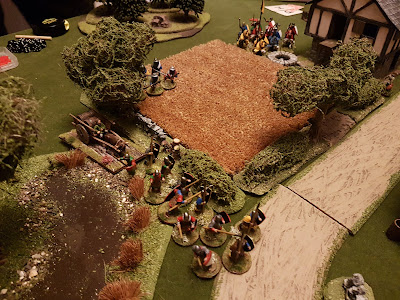 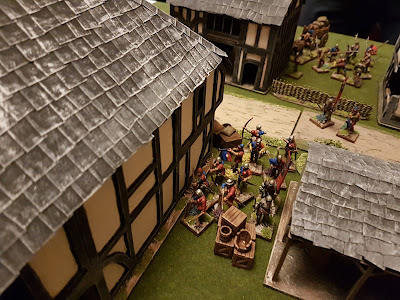 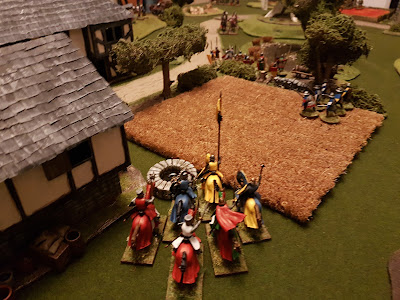 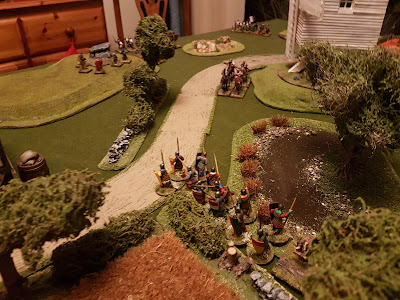 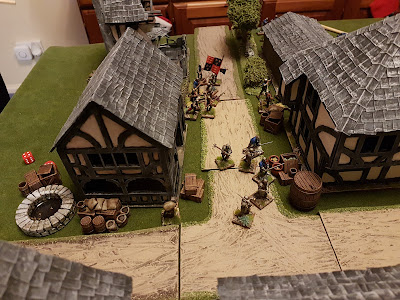 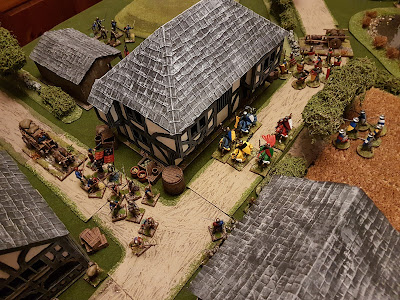 Email ThisBlogThis!Share to TwitterShare to FacebookShare to Pinterest
Labels: Lion Rampant, War of the Roses