I've been looking around for islands to 3D print for use with Man O'War (etc).

I came across this rather wonderful and well scaled model of Dragonstone Castle from Game of Thrones.

It was the longest print I've done yet and came out brilliantly on my new Prusa Mini. The model has a recess which has allowed me to add lighting to it. 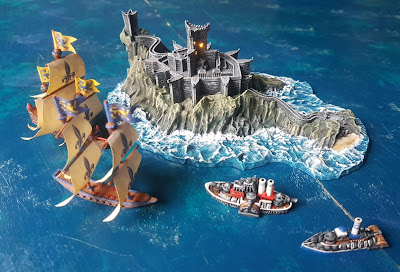 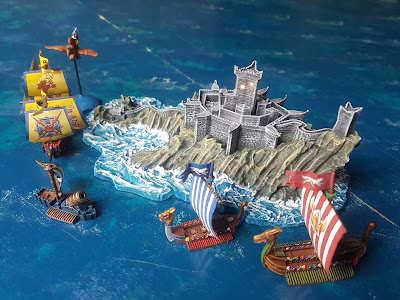 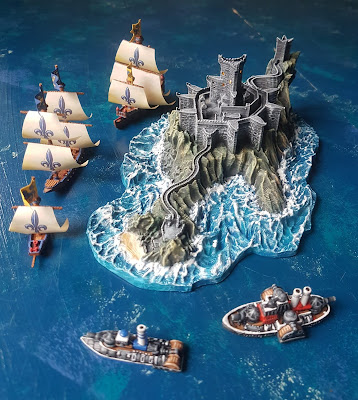 We used it for the first time today as the main island in the Treasure Island scenario. Brendan used Empire again, this time with the addition of the expansion ships and a Sea Dragon. I used Dwarves with a Kraken.

Brendan set my Dreadnaught on fire in the first turn, disabling it for the entire game and landed sailors from his Wolfships on the treasure island finding the treasure straight away. He then attempted to sail away with it but my Kraken jumped on the Wolfship with the treasure and killed all its crew.

In the mean time I devastated Brendans Ironfists and Wargalleys with my Nautiluses and Ironclads, but my Monitors were all destroyed.

In the end there was no way I could get enough battle honours to win despite having stolen the Treasure from his re-crewed Wolfship, so I conceded the game and took consolation in having at least got the gold.

A fun game as usual. 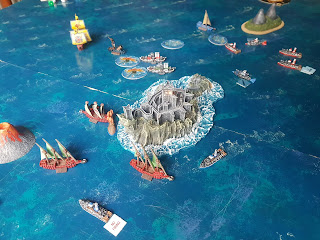