League of Rhordia Warband for Kings of War Vanguard

With COGS starting a new Kings of War:Vanguard campaign based on the new Ice & Iron book I needed to start a new warband. Opening the new book for the first time the first page was for the League of Rhordia warband and that's as far as I needed to go...

I'd wanted to do a Rhordia force for Kings of War, but couldn't really see myself painting so many Halflings. However with Vanguard I don't need anywhere near as many. In fact looking through the list I could see that if I used some Halflings I've had since the early 90s and my existing Wars of the Roses humans I'd cover almost all the options. All I was missing was a few Crossbowmen, Musketeers, a Halfling Sorcerer and an Honour Guard model.

The musketeers and crossbowmen could come from the mercenary units that I'd not painted yet for my Wars of the Roses army. I would use a spare Antidiluvian Miniatures "Gnome Illusionist" that I'd never got around to painting for the Halfling Sorcerer and I'd just not bother with the Honour Guard as already I had plenty!

Anyway with a bit of base repainting as well, it's all ready to go! 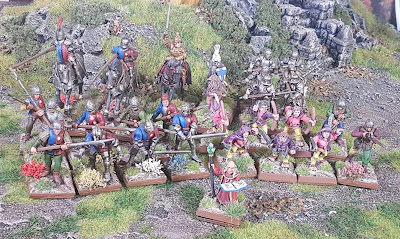 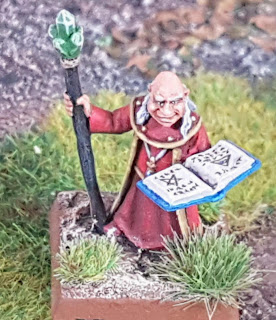 Now I'm back on to those pesky French Line Infantry...
Posted by Richard Heath at 21:27

Email ThisBlogThis!Share to TwitterShare to FacebookShare to Pinterest
Labels: Kings of War:Vanguard