I've had my Kickstarter copy of Dungeon Saga for almost a week now. In that time I've played 7 games and won just one of them!

The first 4 games were against my 9-year-old son and the most recent 3 against my friend Andy at COGS.

After the first few games it came apparent to me that playing with unpainted models just wasn't going to do. The was especially true with the heroes in their blue plastic. I finished painting those just in time for Andy to use them against me tonight.

Here they all are... 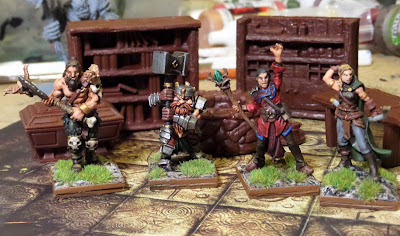 Along with the rest of the game they are very nice indeed. Good sculpts with good detail. Though maybe not quite as clean casts as the ones in the advertising shots. Still, I didn't have to remove any mould lines to get them in the state they are now.

You may have noticed I have re-based them. This is so that I can use them in non-dungeon based games as well.