WAB to DBA/FOG MDF Base Conversion

A little project I've been working on...

A number of us at COGS now have 28mm ancient/medieval armies based up on the Warhammer standard. i.e. 20mmx20mm bases for infantry and 25mmx50mm for cavalry. However we've been looking at various possible rules we could use them with. At the moment we've been using Kings of War and Warhammer Ancient Battles, but I've been looking around and have seen many other rule sets we could use.

Many are around that use the Warhammer basing standard, War and Conquest, Clash of Empires, etc. The other main standard appears to be that of the WRG systems WRG itself, DBA, DBM and has been used by other systems including Field of Glory. This system works on elements of 60mm base width and varying depth and numbers of figures.


During my investigations I found this useful article "Basing your ancient army for multiple systems" This suggests basing up in the Warhammer standard and then using small element sized movement trays for use with the WRG style systems. Well this is what I've done, though I've differed slightly from that article in that I've kept the cavalry on 25mmx50mm rather than switching to 20mmx40mm. This does mean that I can only get 2 cavalry models ever on a base, but then I'm fairly sure that I'd struggle to get three on removable 20mm wide bases anyway. Also the elements will be 50mm deep rather than 40mm. None of the systems insist on either of these as being hard-and-fast rules anyway.

Rather than cut the bases myself I've had them cut from MDF using a laser cutter in the same way I've been having the larger Kings of War movement trays cut for me. I've had a trial set of each of the sizes I think I need and finished them off to see how they'll look before ordering a whole load more. They're magnetised just the same as my normal movement trays.

I think they've come out ok and will get a load more so that my 28mm miniatures can have a whole extra life in other games. To start with I think I'll go for a bit of DBA. I've not played that for almost 20 years and when I did it was in 15mm.

Here are some of my Normans mounted on them. The foot knights will be painted in November. 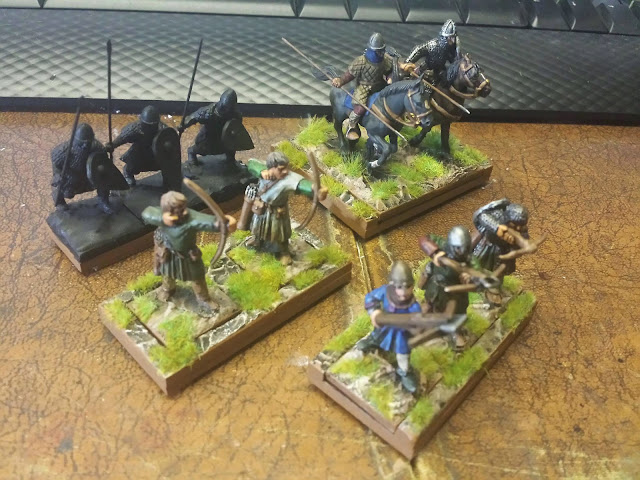