Having added some Artillery and command bases to my ongoing ECW work I have a small 500 point Parliamentary force ready for battle using the Liber Militum:Tercios rules. 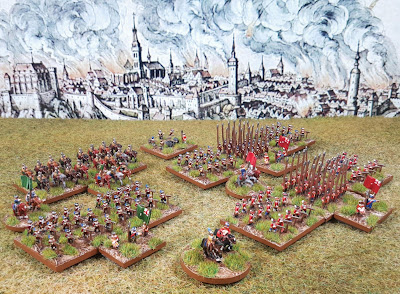 It consists of an Foot Regiment of two Pike and Shot units (red); and a Horse Regiment with a single Horse unit and a Commanded Shot unit (green). In support there is a single light artillery piece. This should give, I think, a good balanced force for a trial game.

In the English Civil War Regiments were often signified by single coloured flags (for the Colonel) with the Cross of St George added, in canton, for the Lieutenant Colonel and then a varying number of devices added for lower ranked commanders. I've used this structure a little with my unit markers. The regiments in the army will be of a single colour with the main commander of the regiment with the Colonel's standard and then units marked with the others as I see fit, though not necessarily following the rank system.

Of course this system was not followed exactly and I'll probably make up other systems as I go. Luckily there's not too much detail for the armies and it is possible to make things up as you go.

In the end I will probably have a lot more of these small 15mm x 20mm unit marker bases then I actually have units. I'll be able to reorganise the troops a fair amount.

As you can see in the first photo I have taken the pikes out of one of my units to make the Commanded Shot. The ability to do this is my main reason for basing pike and shot separately. Though also formation changes are possible, but not needed for the Tercios rules.

My commander is loosely based on Sir Thomas Fairfax the commander of the Parliament forces at Naseby.

The mounted standard bearers are some of my first 6mm conversions. The banner poles added with brass wire and the flags made of paper. I'm rather pleased how they've come out.

I wanted to add an army standard, but could not find one for the Army. The Royalists will get one however! 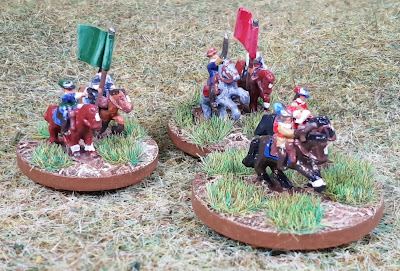 I've already started painting the pike and shot for the Royalist army. Then when that's done I'll have to get a trial game played!

Edit... OMG, I missed out the Artillery!

I didn't just paint that one gun, but five in total. 3 are usable as medium guns and two as light guns. I've used slightly smaller 25mm x 25mm bases for these. I painted them with grey gun carriages for use with the New Model Army. I'll be painting the next batch with much more brightly coloured gun carriages. 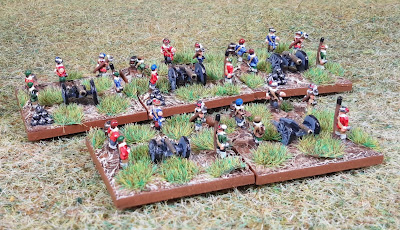