With much of my 1813 re-organisation done. I thought it a plan to get a game of Blücher in with my son. He took the Russo-Prussian force commanded by Blücher himself and I took the French Army of the Main commanded by Marshal Soult.


After the Scharnhost phase Brendan looked to be in a very good position. Though I had more victory points on the map he had declared a battle with all his troops off the board and most of mine as reserves. However looking at it we realised he had to hold both objectives on the board to win, whereas I would just have to take one of them.

At the top of the table in the photo is my single on table column, facing off against all three Prussian Corps. The Russians have been left as garrison duty in the town.

With such an overwhelming advantage initially Brendan's best hope might be to deal me a swift and decisive blow before my reinforcements arrived. So he attacked... My French line looked very, very thin. 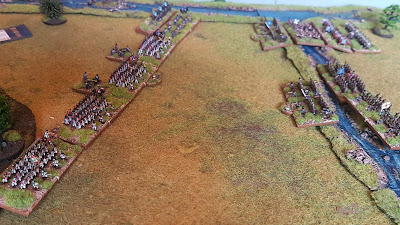 Luckily though they held in time for my reinforcements to arrive and that thin line became really quite thick. 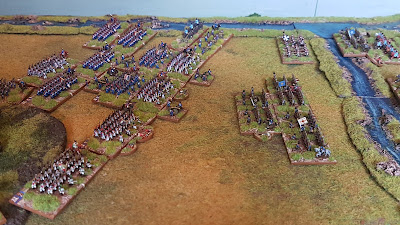 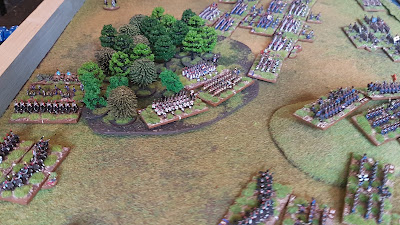 But undeterred Brendan attacked all along the line. 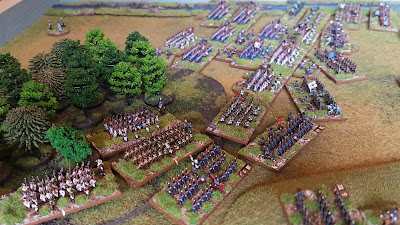 My troops held, they took losses, but they held!

Meanwhile over by the town at the other end of the table my second reinforcement column arrived. 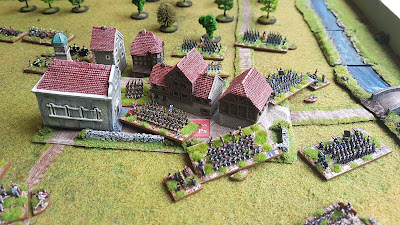 Eventually the Russians had a real foot-hold and the French forces were almost spent, but then the other French column arrived and continued the assault. The Russian cavalry tried to hold them out of the town, but they couldn't stop the French continuing their frantic battle.

Meanwhile on the other flank, the Prussian assault finally stalled and started to fall-back. Realising that the key to victory was the town I did not follow them and let them go. I could now take the town as I had fresh troops over there and the Russians were almost spent.

In the end there was nothing the Russians in the town could do, there were too many fresh French units and they were pushed out. They could not hope to re-take it as there were no troops left anywhere near. They were unable to break the French army and so Brendan capitulated as the sun began to set on the battlefield.

Yet another great battle with loads going on.

It was the first time I'd really used attached artillery with my units instead of massed batteries and it does work. The conscript troops, though poor, were more effective than expected. The cavalry in the French force poor to say the least, but it managed. It's quite a different force to play with compared with the early war army. Brendan was using both Blücher and Bülow and so never had to worry about having enough MO pips, even with such a large force. I did struggle sometimes though!
Posted by Richard Heath at 23:24