Having loved doing Napoleonics in 6mm I looked around a little while ago for other projects for 6mm. ECW is something I've never really played, but I have always wondered about. I knew very little about the tactics, etc... Actually I pretty much knew nothing and still don't know that much. I'm trying to learn.

Anyway, I decided to start to build both main sides. Luckily with ECW if you build one side you can potentially build both (I know there are more than two), with just a change of flags and in some cases not even that! Or at least that's what I've gathered. Please correct me if I'm wrong! With that in mind I bought quite a few (at lot) of ECW packs from Heroics and Ros and quite a few different rules sets. At the moment Liber Militum Tercios is most interesting to me, with Pike and Shotte coming just after, but I also have Twilight of Divine Right, For King and Parliament and The Pikeman's Lament. (and I just bouth Forlorn Hope as well)

I decided to go with 30mm x 30mm bases with 2 bases of muskets and one of pike making up a standard infantry regiment. Cavalry will go on two. This allows me to play Tercios and also I expect Pike and Shotte.

I've had the first regiment of infantry sat on my bench for a month or so whilst I've been painting my 1813 stuff and decided on Friday that now was the time to get it done. I've gone for the common and classic red and have used Citadel contrast paints for the very first time (just for the red). The uniforms don't have so many colours as Naploenics so I thought the shading would be necessary.

I'm rather pleased with how they have come out... 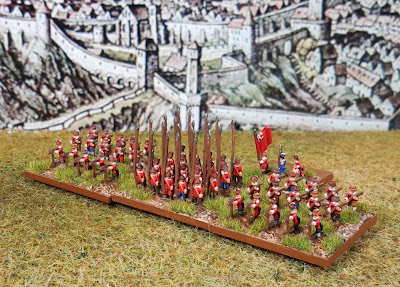 The idea is that the bases could be used in a variety of ways, not always together, so that units of just pike or just shot could be built as required. The command base is separate and all flags on that. I bought loads of extra command strips from H&R to make a lot of variation possible. 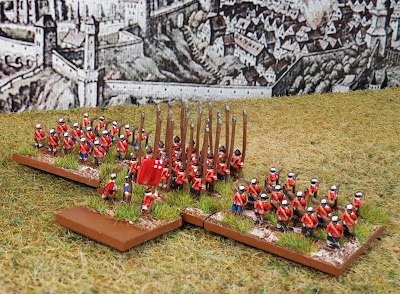 The blank section on the command base will be where I put details of the unit. Nothing as yet as I'm still not sure what to put, or actually which rules to use. 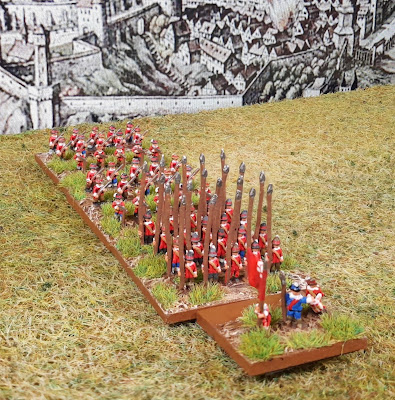 The 3 bases mean that I can do formation changes if needed without too much hassle.

Back to painting Napoleonic French for now... more ECW will follow later.

Edit: After a comment on Facebook that the command should be at the front, I made a change. The only reason I had the command at the back was because of the "huge" flat markings area. I decided I didn't need that. I have cut that down so the command base is 15mm x 20mm rather than 20mm x 20mm. There is still room for a really small identifying mark and maybe something could be written under the command base if necessary. 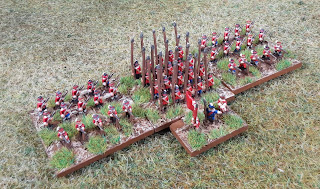