My posts in the past have been fairly random in their timing, posting when I get something finished or get a game played. I thought I'd try something else in addition, regular posts every Tuesday with photos of what I'm working on at that moment. Lets see where that goes...

So, right now I'm working on my 3D printed brigantine for use with Blood and Plunder and hopefully other games as well. I've just finished the base-coats. It's on to highlights and detailing next. 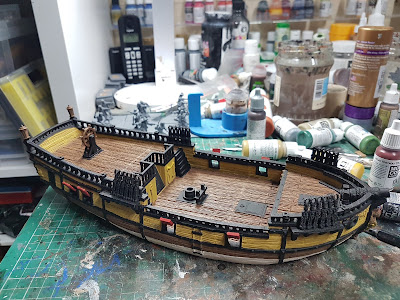 In the background you can also see a load of additional sailors to supplement my crews for sea-based Blood and Plunder battles.

Over on the shelf and paused a little whilst the 3D printer is working on shelves for the kitchen is a tavern from the Age of Pirates set I've mentioned before. There's a few more bits needed to be printed before that can be finished off. 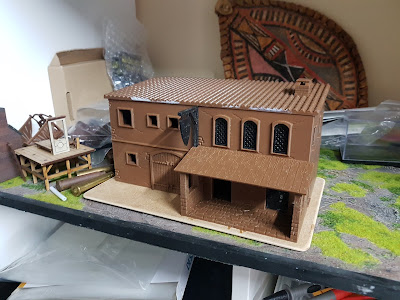 The guillotine has been sat there for a couple of years now! I don't know when that will be finished.

Posted by Richard Heath at 22:43 No comments:

First Game of Blood and Plunder

With the new kitchen completed (almost) the house has returned to some form of normality and we were able to get a game in on the dining room table back to it's normal position after the whole dining room had been turned into a temporary kitchen. I've been working on Blood and Plunder minis and terrain and so that was the game of choice.

The forces were the English and French starter sets on my Terraformers skirmish boards with Caribbean additions in the form of some Spanish-style buildings and palm tree jungle bases.

I asked Brendan which side he wanted to play and he chose the English. I suspect because they were actually the only real pirates. They were under the command of Robert Searle. My French under command of Julien Lambert were simply Militia forces.

We played the "Take and Hold" scenario, with the bridge over the river as the central objective. I was the defender and chose the side with the Spanish buildings leaving Brendan to advance through the jungle. 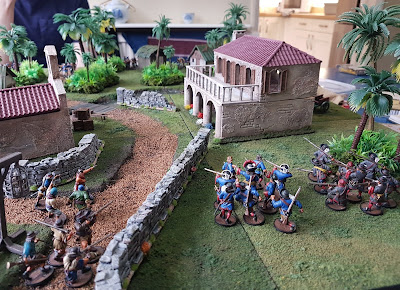 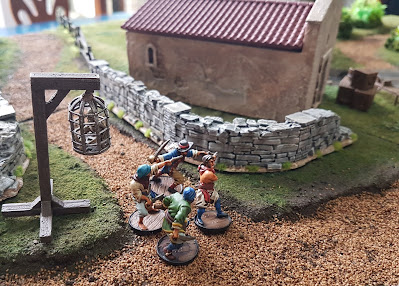 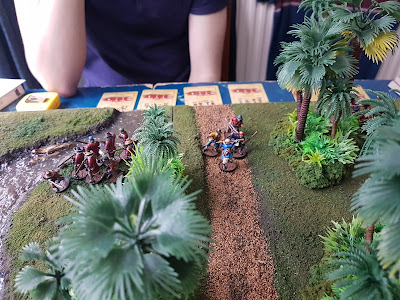 Early in the first turn My Flibustiers and Captain climbed up onto the villa balcony to get a good position and this proved a very bad idea as Brendan's Freebooters popped out of the jungle and killed half of them in a single round of shooting. With their tails between their legs they climbed back down again out of line of sight and the Captain ordered the Milicies around the back of the villa whilst the Marins and Boucaniers advanced on the Bridge. 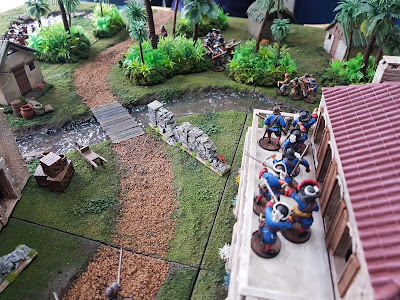 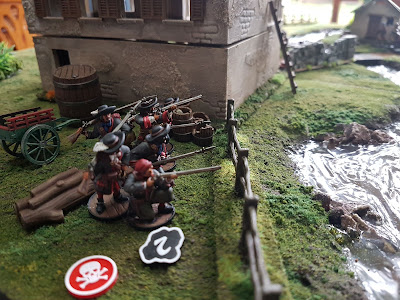 Brendan advanced on the Bridge and soon his Militia was able to count as holding it, though a little too early to score points. The Freebooters covered their position. His Sea Dogs advanced across the river. 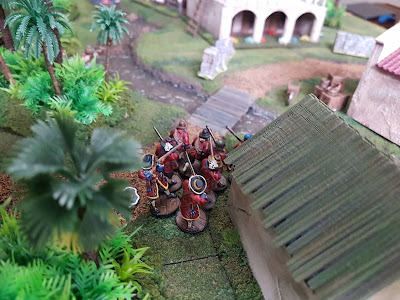 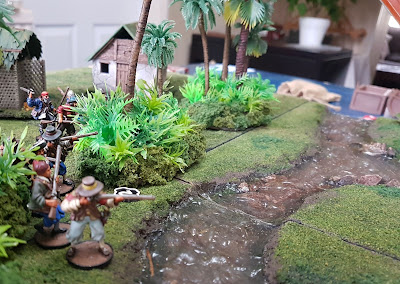 With their wits recovered my Flibustiers risked the villa balcony again and from there were able to wipe out the Sea Dogs. They retreated back behind it and as they did the Boucaniers were routed by the Militia.
My Marins had been hiding in the hermitage at this point and they saw they needed to act soon to stop the English scoring on the objective. Believing they had a chance they decided to charge across the bridge at the English Militia who were in the middle of reloading their muskets. The English managed to get just a few shots off at the Marins as they crossed the bridge killing three of them and the remaining one fled the field. However this had flustered the English Militia leaving them on 2 fatigue and 2 reloads. 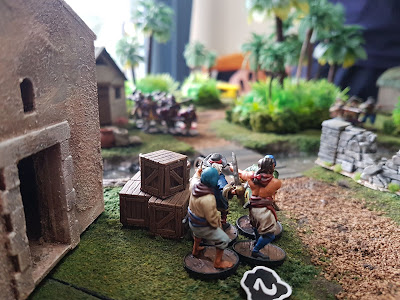 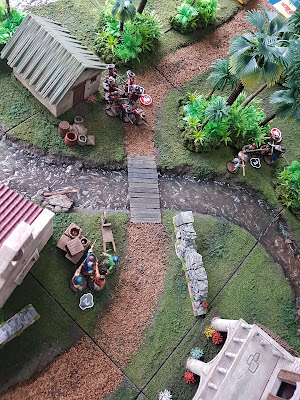 Seeing and deciding to grasp this advantage I sent my Milicies around the corner of the villa for a clear shot on them and opened fire. The English Militia broke and ran for cover.
Brendan advanced from the jungle and battered the Milicies with fire, but with the road clear my Flibustiers and Captain moved up to the wall next to bridge and started to claim it. For the next couple of turns they held. Brendan's troops coming out of the jungle had no cover, but the Flibustiers had hard cover behind the wall and their Captain to keep them strong. With the Militia failing to rally their open flank was not under any risk. 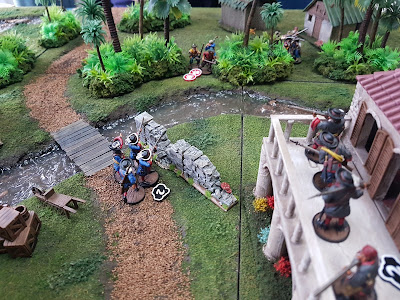 The tide of the battle had changed and Brendan lost the Strike Test. Unbelievably it was a victory to the English!

This was a great first game and we're looking to play a lot more. The game flowed beautifully with not too many rule-book references and I just have one rules query I need to look up.

I have a Brigantine on my bench right now which I need to get built ready for sea battles... but there'll be more land games first before that is ready.

Posted by Richard Heath at 20:00 No comments: 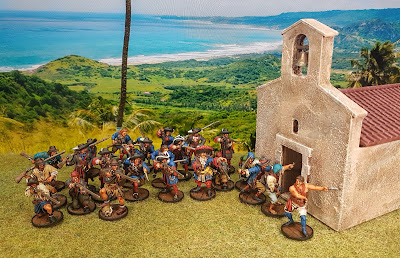 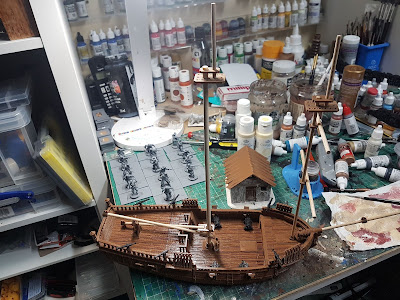 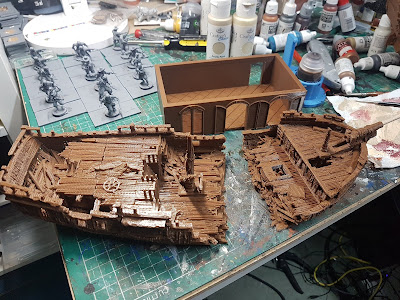