"Hello. My name is Inigo Montoya. You killed my father. Prepare to die."

The Princess Bride has been one of my favourite films right from when I first saw it. I know I didn't see it at the cinema when it was released in 1987 as we didn't go there quite as much as we do now, so it was probably a few years after it was made that I saw it on TV.

But I saw parts of it before then without realising what it was...

You see The Princess Bride was filmed mostly around Derbyshire where I live and the main castle and village that appear in the film were filmed at Haddon Hall not far from where I live. By chance I had a family trip to the hall just a few days before they started filming.

I remember vividly the drain pipes covered  with fake vines, the medieval village built in the grounds and the stone bridge over the river that was far too narrow for Princess Buttercup to ride a horse across. This was widened with a hidden wooden section at the side so she could. But mostly I remember when one of the set builders offered to sell my Dad the plaster wall he was building for my dad to use at the bottom of our garden. I doubt it would last long.

The title of the film we'd been told was "The Princess Bride" and with such a sappy title we thought nothing of it. But the film isn't sappy... it's glorious. Full of great actors, a fantastically funny script and plenty of action.

So when I spotted Antediluvian Miniature's Pirate set I knew I had to have them, They would fit in great as models for my Frostgrave games or maybe for use with Osprey's En Garde ruleset.

I just finished painting them and I'd have to say they are some of the best miniatures I have ever painted. Wonderfully characterful with masses of fine detail. 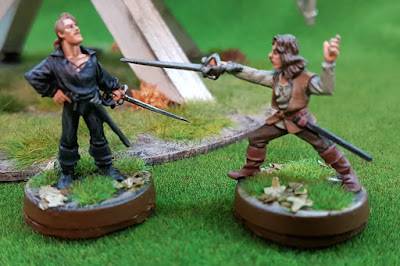 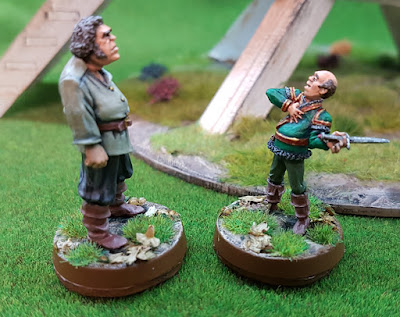 Link to the Antedivulian Miniatures shop.
Posted by Richard Heath at 22:53 10 comments:

Hammerhead brought another Kings of War big game for us this last weekend. The biggest one yet. This time around 28,500points per side on an even bigger table.

However a number of issues meant we didn't get our usual 6 turns done and instead ended with a slightly unsatisfactory 4. This meant that the game, in my opinion, felt unfinished. We'd still got more to do before we could say a definite conclusion had been reached. Good won, almost, though only really tenuously.

The reasons for not completing were several, the biggest being that 4 players a side was just not enough for the size of game we attempted. The shooting and melee phases dragged on without enough players to handle them.

However also I'd decided to try an odd shape table to see what happened and reaching into the centre proved a little more difficult than normal.

Live and learn! Back to a rectangular table next time and also reduce the size of the armies if we can't get enough players...

Despite this everyone enjoyed the day and were asking straight away when the next will be. However I don't actually have one planned yet! With re-enacting season starting soon my mind is elsewhere. Also I'd like to try the game at a different show, so if anyone can suggest somewhere that will host such a large table please let me know! 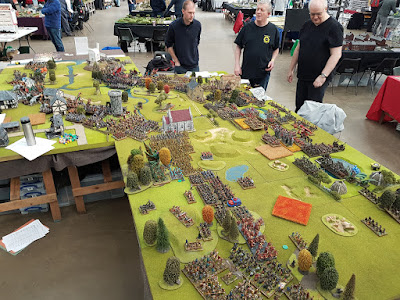 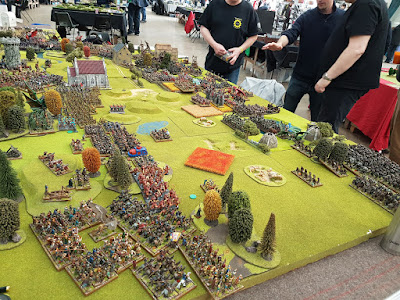 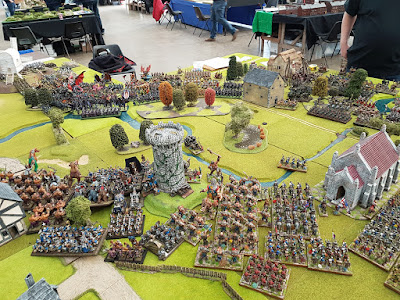 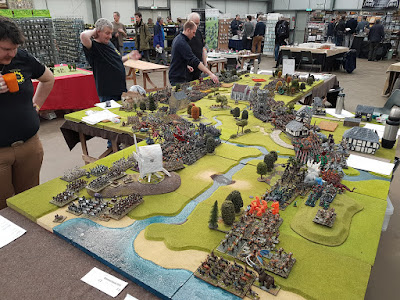 The table was planned out in advance using the miniature set of tiles that I have, one each for the larger real tiles means that the layouts are always possible. Each board is in reality 2 foot square. 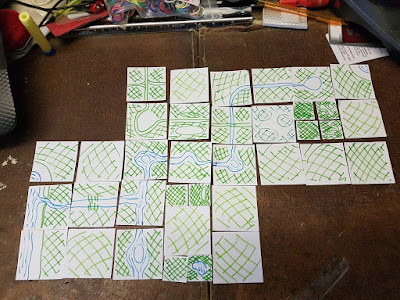 Posted by Richard Heath at 22:28 No comments: